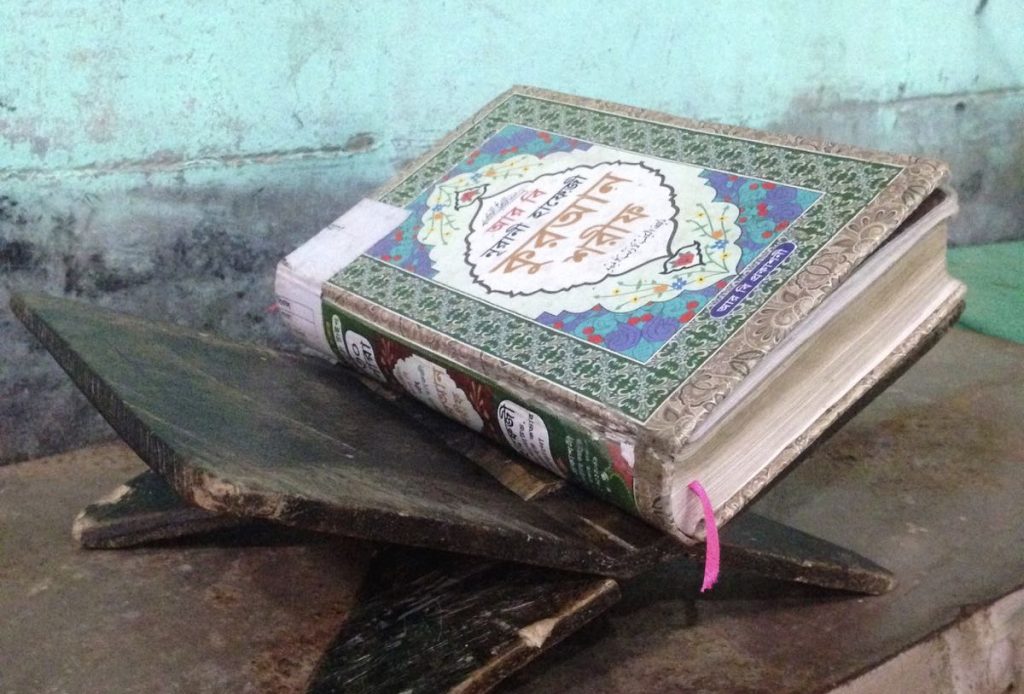 The call for prayer had woke us up after five, but we didn’t get up until seven. It was a foggy morning, but the sun was already on its way to get the upper hand against the mist.

We got out and crossed the grounds in front of the orphanage where we were staying, a couple of minutes outside the small town of Charfasson, on Bhola Island in southern Bangladesh.

Outside the gates, people were already up. We took company with Ashraful, a young kid who lives with his mother a bit further up the road. His father passed away when Ashraful was only two – now he’s maybe six or seven – in an accident working in construction in Dhaka. That means Ashraful has to do his part in providing for the family, just like many other children in Bangladesh. He spends every day working at a tea stand near to his house: serving tea, clearing the small wooden tables, running off to get more roti or milk or water.

Other kids were up early, too. Boys with white caps on their heads, girls with tiny golden earrings. Some had scarves wrapped around their ears to keep warm, others braved the morning cold with their bare feet. Most kids, unlike Ashraful, were on their way to school.

A small path next to the tea stall where Ashraful works leads up to a pond surrounded by one-floor houses. On the left hand side is a long, white building with a small stone patio facing the pond. Inside the house is a madrasa, a traditional school establishment (madrasa is the Arabic word for “school”) that teaches the Quran, but also topics like Bangla, English, math and history.

We walked up there, stepped out of our sandals and parked them next to the others: plastic pairs in pink, turquoise and black, waiting for their owners to come back and get them. 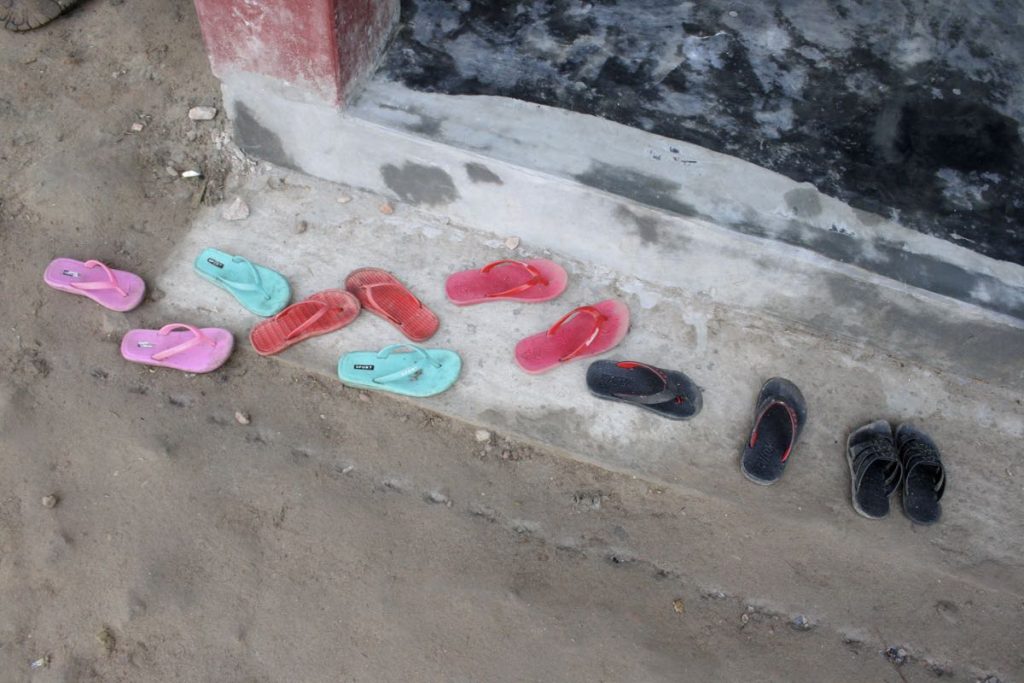 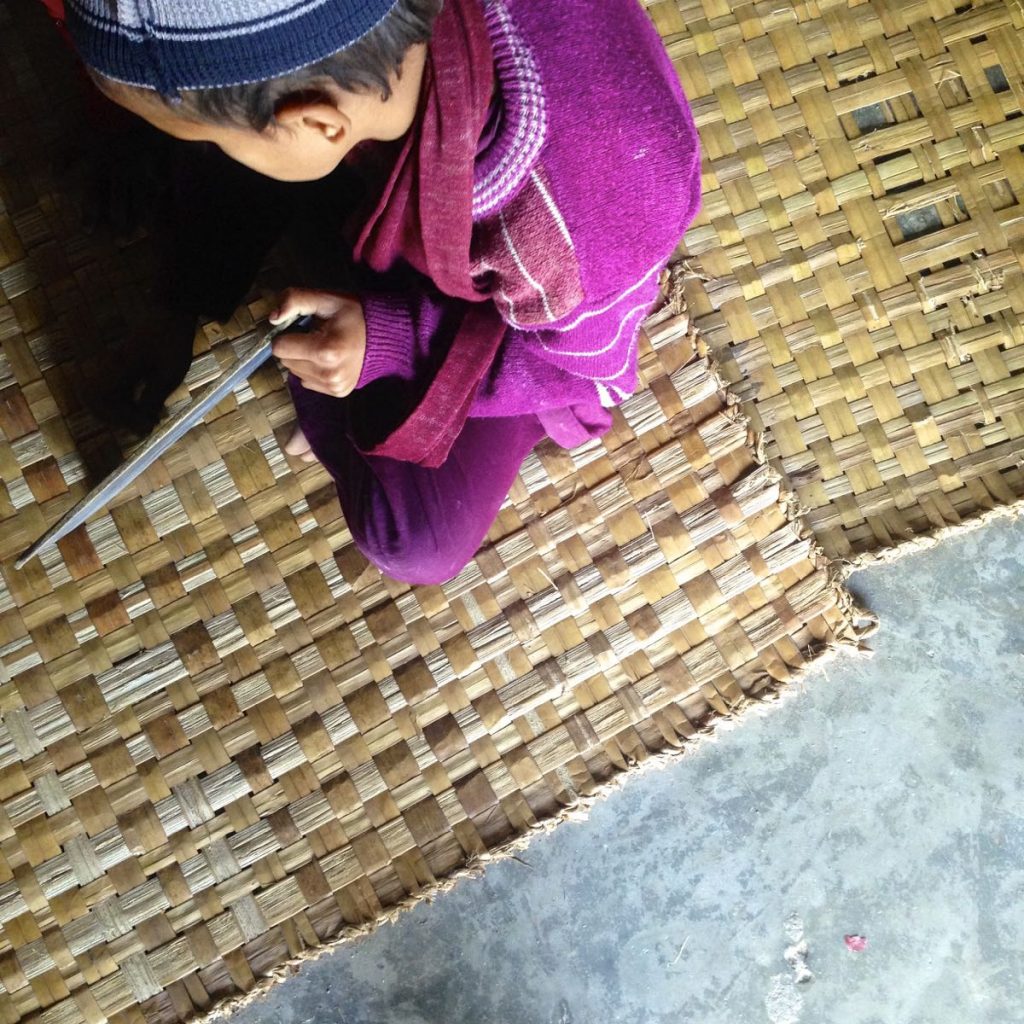 We walked into the room in the very end of the building, which is where the youngest kids take their classes. The floor was swept clean, large jute mats were laid out for the children to sit on. A young man with a white scarf wrapped around his head (it was chillier inside than outside) and a warm smile was relentlessly trying to get the kids to sit still in neat rows.

The he sent them, one by one, to the front of the room. Up there, gaze fixed on the horizon, they started reciting lines from the Quran. The louder the better: the kids seemed to imitate football supporters more than anything else. “Ashadu Allah!”. A boy in long green punjabi shouted with a loud voice, his friends, even louder, repeated: “Ashadu Allah!”.

The Quran is written in Arabic, a language with an almost sacrosanct status for many believers, and is read in its original across the world. Here too: the kids recite the text in Arabic, a foreign language in both looks and sounds. Repeating, remembering. Repeating, remembering. Sometimes, it does sound very much like Arabic – sometimes a bit less! 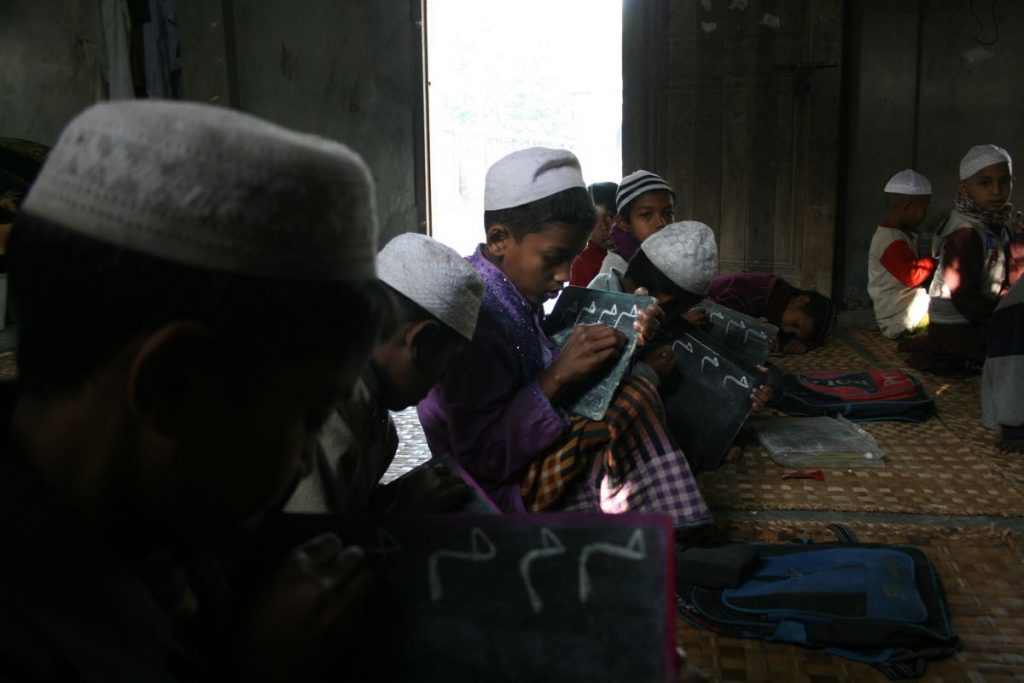 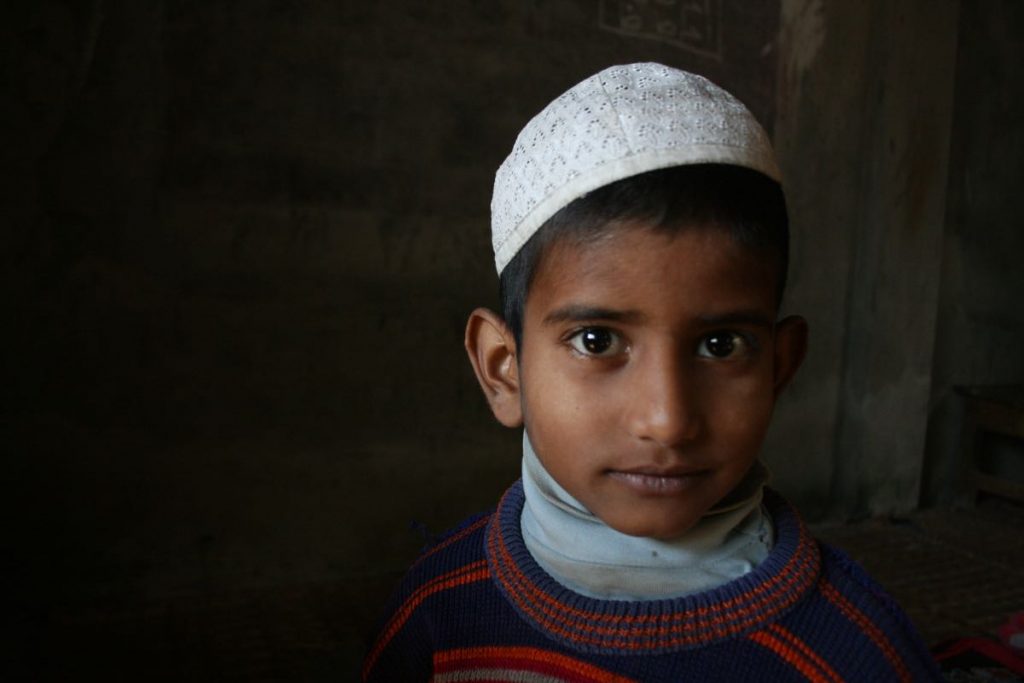 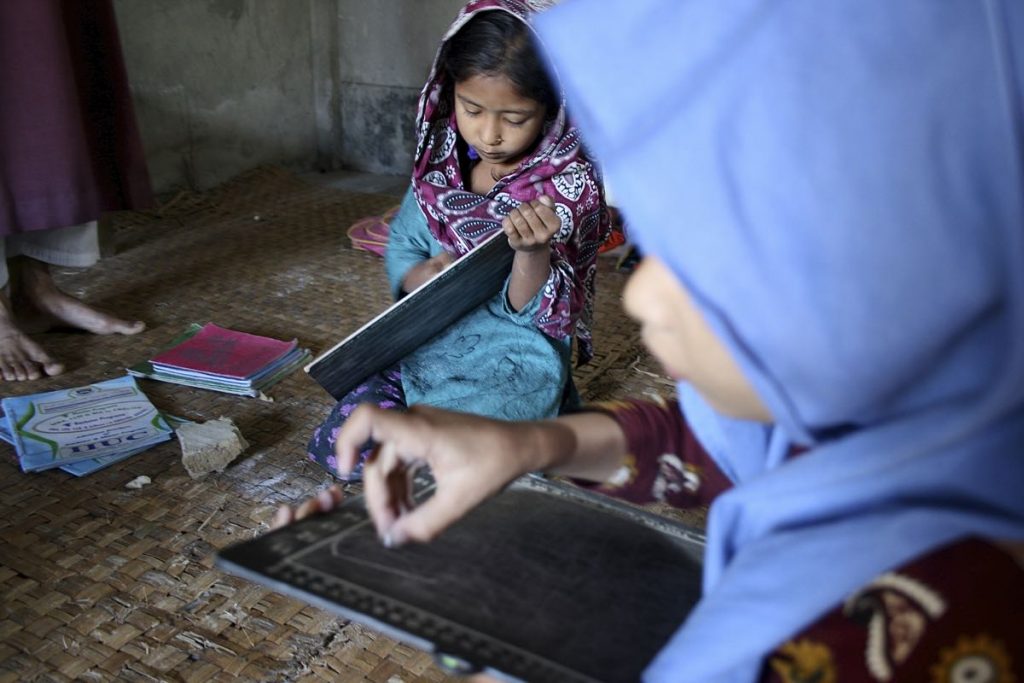 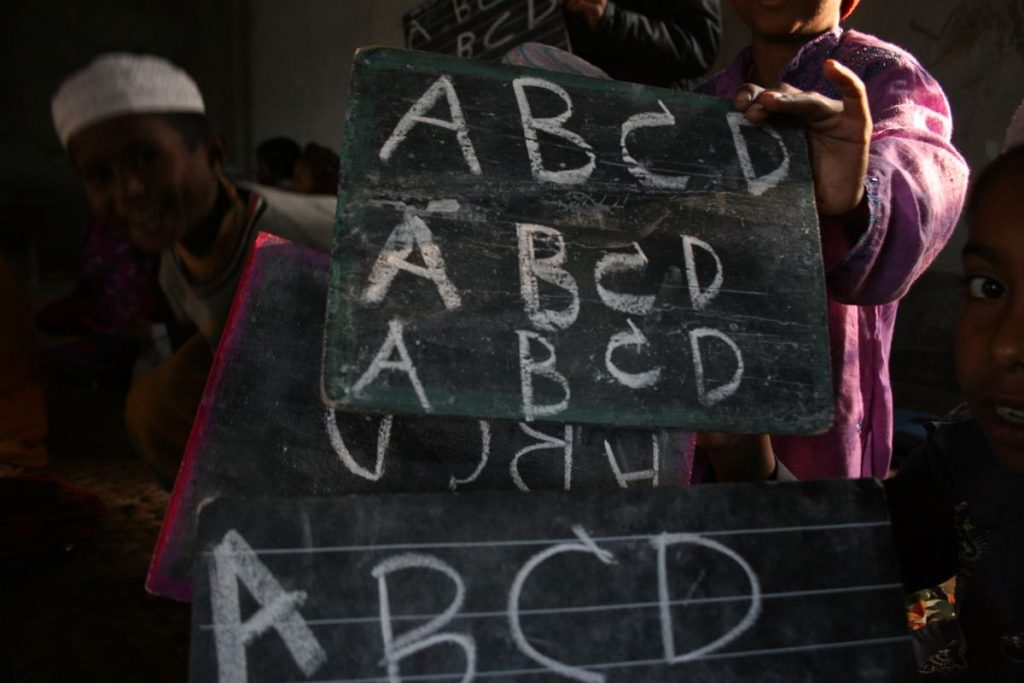 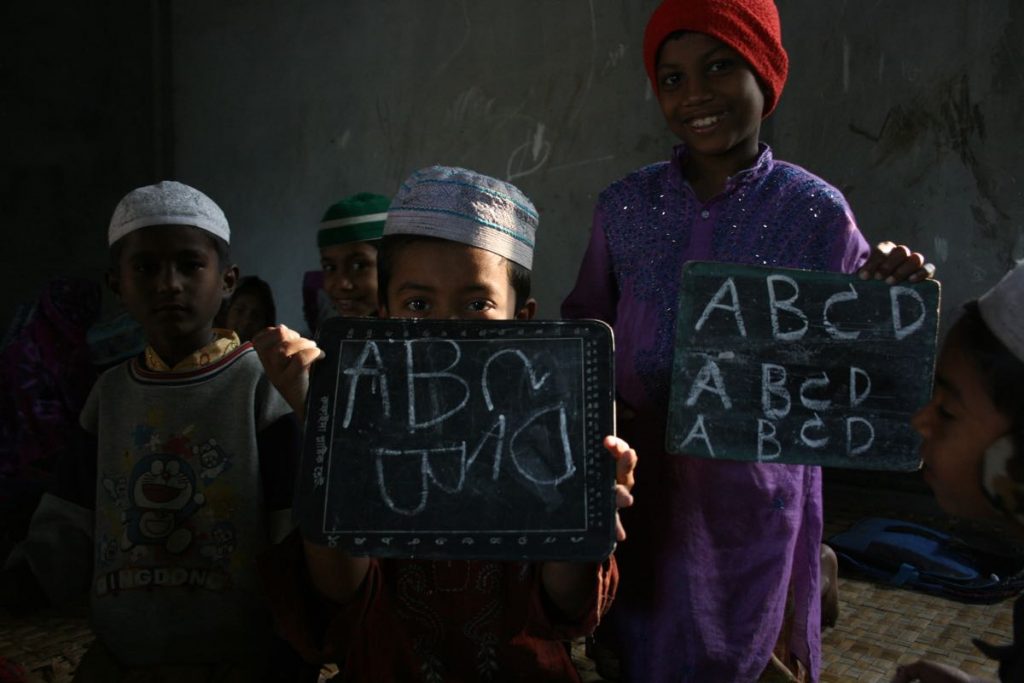 Then, another language (the third alphabet they kids were learning that day). English, starting from scratch: A, B, C, D. The kids took out their writing slates and started copying the characters. After a couple of rounds of A, B, C, D, they got another, trickier, task: to write the name of their country with Latin letters. With concentration, they put one letter after the other until they finally had formed the word …Banglabesh! The word written for them to copy had one of the letters mixed up.

We left the kids to continue class on their own (not so much work gets done with visitors in the room). The next room is bigger and brighter, with pastel walls and open doors. Light was flowing in from outside. Boys and girls, a couple of years older than the small kiddos, were seated around small tables arranged in a half circle. One boy, maybe seven or eight, read with a beautiful strong voice from an open Quran in front of him; the others, trying their best to figure out where on the page with foreign letters they were, repeated his words. 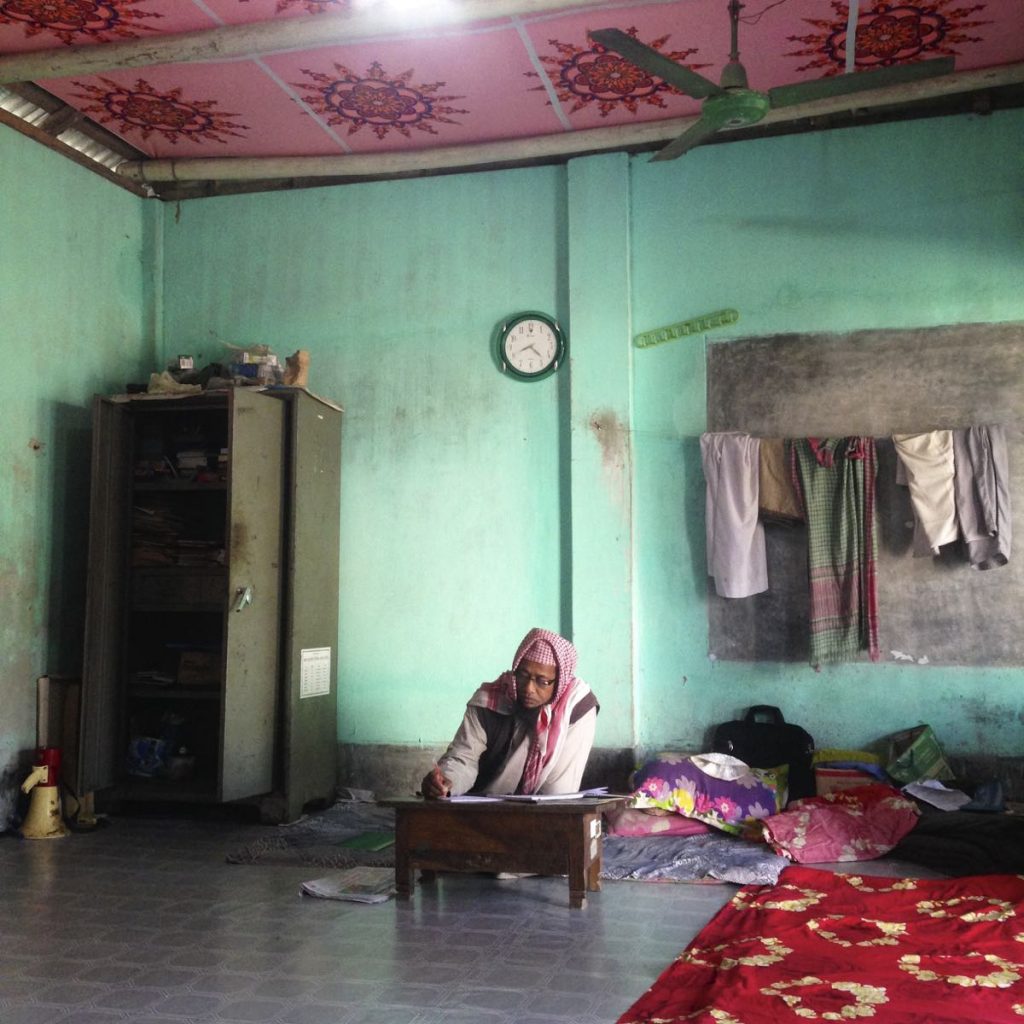 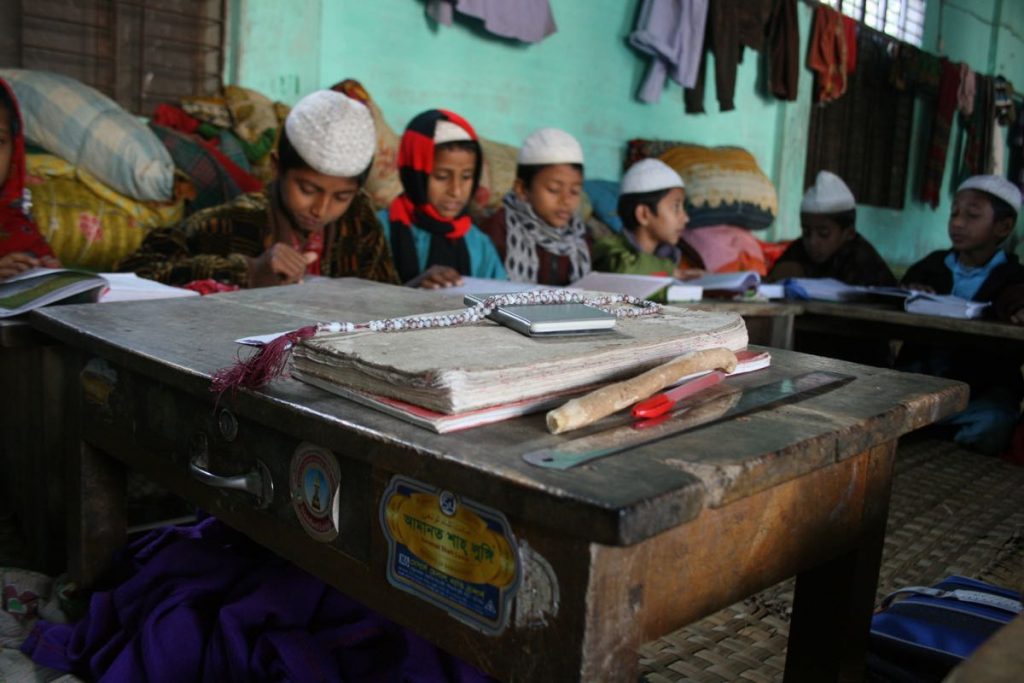 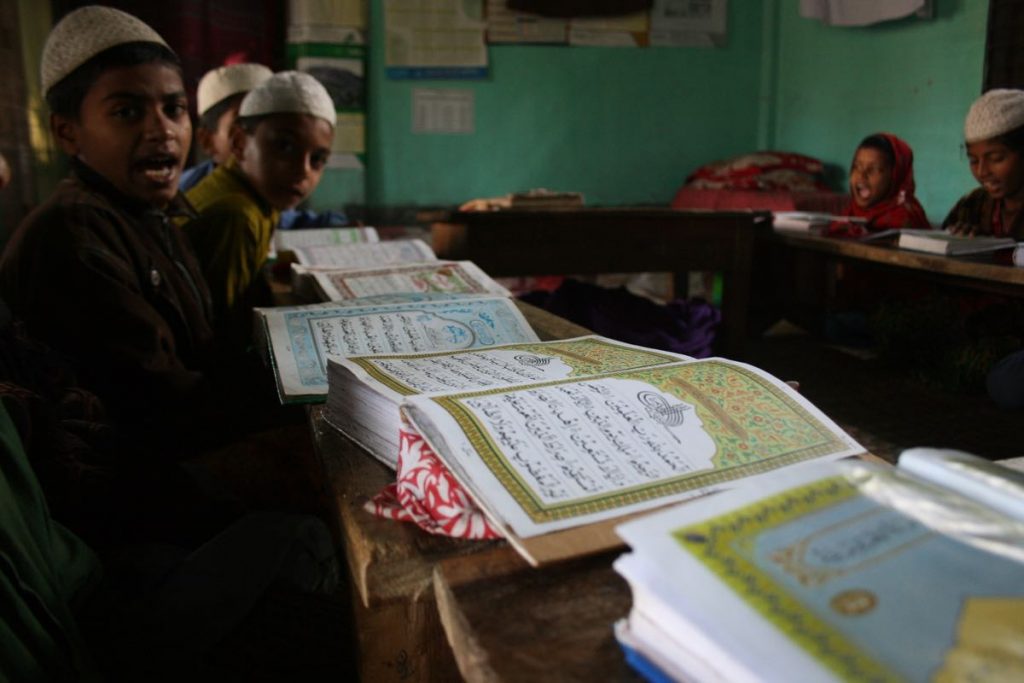 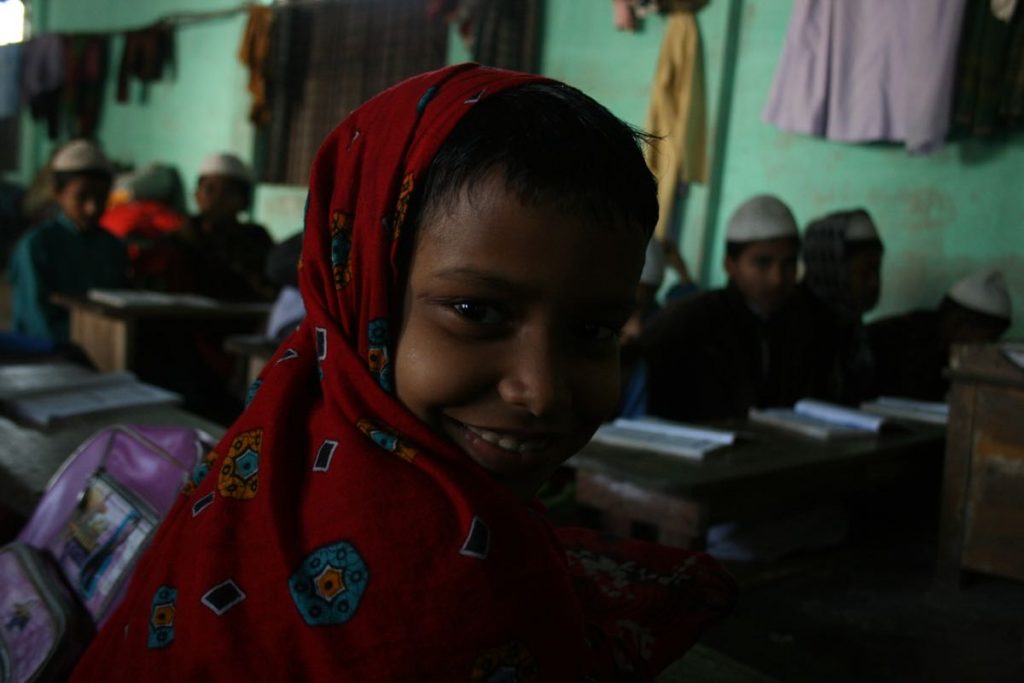 Outside on the stone veranda, three boys had started preparing for lunch. In the Bangladeshi countryside, most cooking is done with one device: a sharp tool called boti. The madrasa boys used it for cutting green beans and onions, and for slicing potato in thin pieces. Soon, the piles of vegetables had all gone from whole to finely cut. 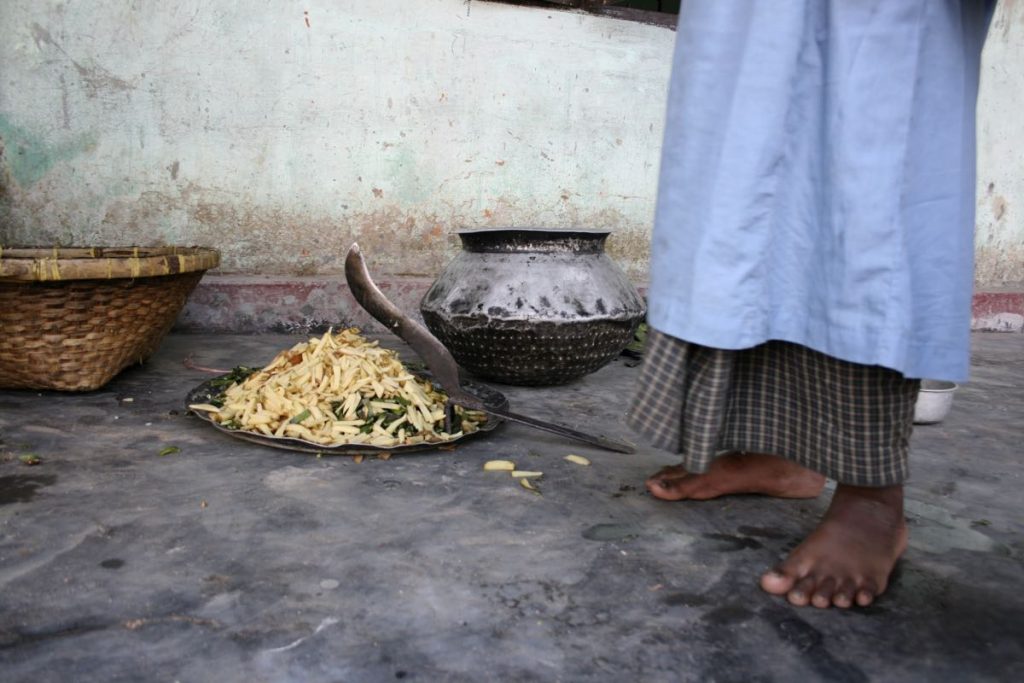 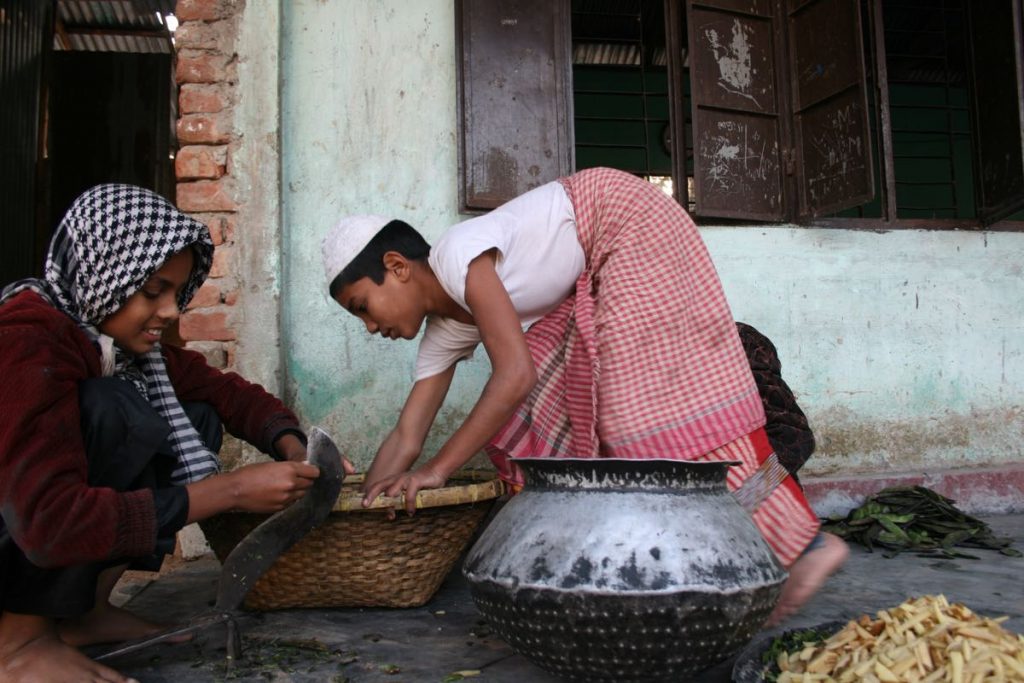 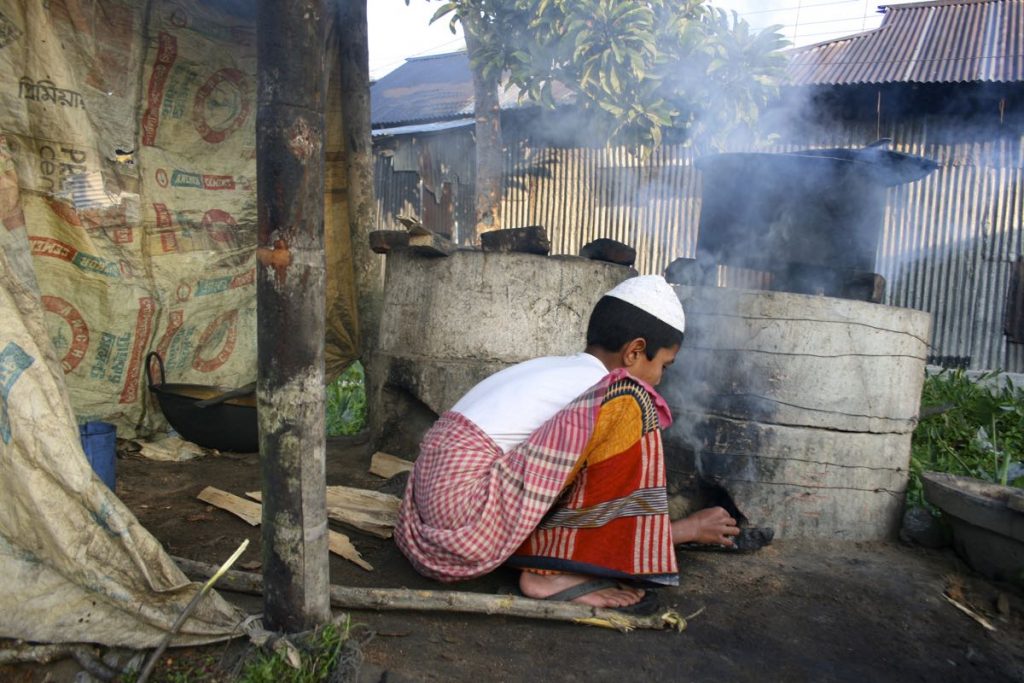 One of the boys carried the heavy plate over to the outdoors kitchen. We stepped into our sandals and started heading back to the orphanage. Leaving the madrasa, we could hear the chanting from inside. But with each step, it faded a little bit more. When we reached the tea stand, we could hear no voices. Only beeping horns, bells and rowdy engines – the familiar cacophony of the street.