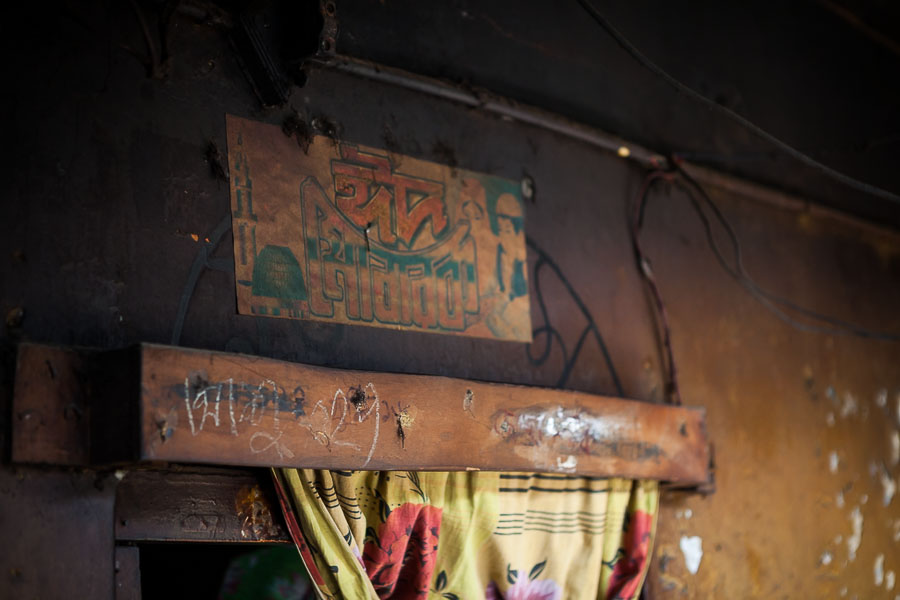 “When you leave here, you’ll forget about me.”

Her name is Kolpana, she tells me – “imagination” (the others too bear names like that: Beauty, Jolly, or Mishty, which means “sweet”). She stands in the doorway to her small room, with the curtain half-wrapped around her. Two guys, young just like her, not yet twenty, sit beside the door. Outside, to the left, is a pair of men’s sandals. Simple and worn, made from plastic.

We talk a bit – I ask Kolpana about life, she asks me back. When I ask how she came here, she answers, “It’s complicated”. My gaze rests in her eyes; hers in mine. Like all the others, she’s wearing makeup. A shade of blue on her eyelids, coloured lips. A thin layer of whitening cream on her face. In between her eyes, a small black tip.

“I’ve been here for one year. It’s… What to say. Some other people are responsible for taking me here. These people, I would like to take them.“

There’s silence from inside her room. The boys outside are silent, too. Kolpana smiles at me.

The joke: a game, an escape for a few seconds from how things are.

It’s not the first time I hear someone ask if she or he can come to my country. Every day, every week, every month. It’s not because of my country specifically – oftentimes we have not even talked about where I’m from – it’s this realisation, this very concrete experience, that things are possible in certain places, impossible in others.

“It’s not only me. So many girls in Bangladesh are doing this.”

There’s something about her that makes the place around us – the turquoise stone walls, the cold floor, the other curtained doorways with sandals outside – fade away. It’s like I understand what she’s not saying, All these things about choices and not making them and what routes are laid out for us and how there are things that happen to us, things that happen to some people but not others, and how all of a sudden it’s your entire universe and the way your life shapes itself.

There’s light coming in from small windows right below the ceiling, making the tiny particles of dust become visible. Dirt, sparkling like fragmented gems in the air.

We say goodbye, I walk out through the alleyway. On Google Maps a few days earlier, I had seen that the street outside is called “Brothel Street” (but the actual name is Hat Khola Street, “marketplace” – not only for fabrics and sweets and hammers and nails, but also for what’s sold inside the alleyways, behind the curtains). I pass by a woman on my way with a metal bowl in her lap, preparing vegetables for lunch. Another woman, on a plastic chair, looking down at her phone.

The street outside is filled with colours from littered bags of snacks and biscuits, pastel facades, decorated shop fronts. From tunics and saris and lungis and scarves that flow in the wind. Right behind us is the local police station (the irony); just next to it a pink temple with three yellow towers. Tin roofs all around, sheltering simple homes and warehouses.

Kolpana comes out from the alleyway. She holds a charging cord for her phone in her hand, wears flip-flops on her feet. Still that same smile.

“The others didn’t believe me, you know. When I told them I’d go and stay with you.”