The night before, it had poured down. It came quickly – cold winds, overcast, then sudden, heavy rain. The power went at about the same time, and with it the yellow lights that dotted the slopes where the city climbs down towards the plains below. 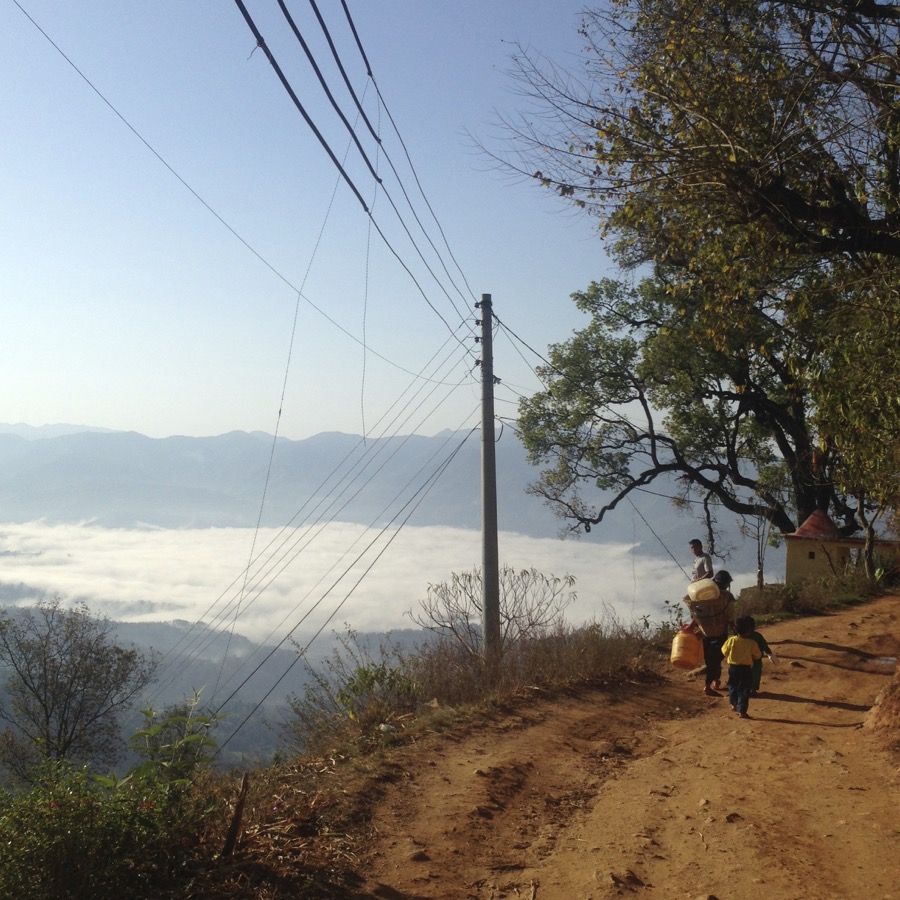 “Tomorrow morning, I think we will see the white lake,” said Dhani, the father of the family where we were staying.

Next day, he comes back from outside at 6 am. I meet him in the doorway – his face is smiling.

“Yes, we’re lucky! Normally we don’t see the white lake except for December and January, when the weather is clear. And the Himalayas are visible today as well.”

We walk out, pass by the nearby Shiva temple where silver garlands still decorate the street, left behind from a festival weeks earlier. An old woman with an orange sari and hair perfectly parted carefully sweeps the grounds outside the temple. That sound, of a broom brushing away dust and leaves and garbage and soil from outside the entrance. The sound of early mornings.

Then, to our right, down in the valley, behind the big open playground and the army barracks to the south of the city: the white lake. A layer of fog creating a pale, fluffy, non-lake lake. 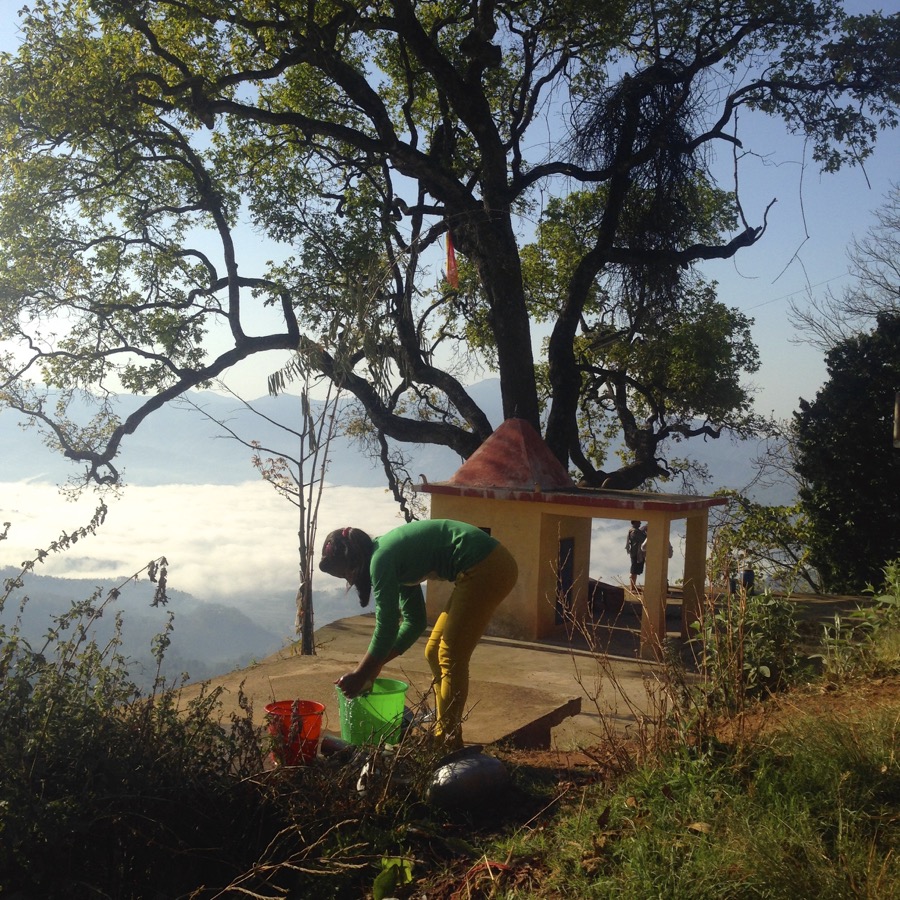 6.30, 7. Not early any more. The dogs have already stopped their morning barking, the morning pujas have been made, red tikas have been dotted between eyebrows, on foreheads. The gas stoves are lit, sweet tea waits to be poured into cups.

On the road, we meet people with plastic cans in their hands. They are walking towards the wells where lines (not of people – they are talking to each other, looking out over the valley – but of cans and containers, one behind the other) are formed.

A teenage girl we just met on the road, carrying a heavy metal vessel resting against her hip, stands outside her house a bit further ahead. Her grandmother, small sister, another grandmother and the neighbour and her kids are there as well. Chicken eat grains from a small metal plate. The white lake can be seen in the distance.

The girl’s name is Niro. She brings two glasses of hot tea from inside the kitchen. I put mine down, waiting for it to cool down a bit. Niro’s father is in Dubai, she says – he’s worked there for several years. Her mother used to be there too, but she recently got back. Just then, the mum comes out from the house. It’s hard to believe she’s actually her mother. She looks younger. Different. Her earrings – not heavy golden ones like the grandmothers wear, but studs you get at a piercing studio. I tell her she has a bright daughter. When I call the tiny one “habibi”, she smiles.

The natti, grandmother, gets up. Gathers four or five chickens who had wandered astray, puts them down back outside the house.

We continue up the hill. Past houses, trails that lead up among the trees, another small temple on the side of the road.

On the top, we can see the mountains in the north. The same green ones that we’ve seen every day – and then, in the far distance, the Himalayas. Only after the rain. 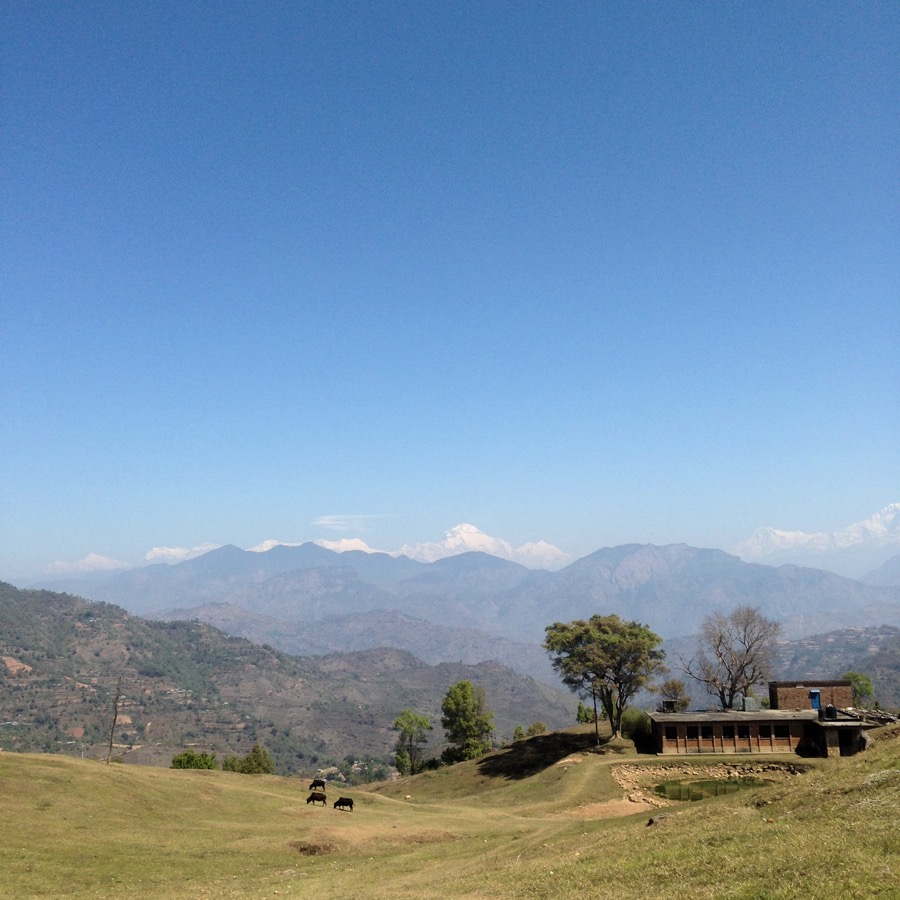 There’s a lonely red brick building surrounded by open fields. It’s a university campus, the sign says. Behind it, green hills that flow down down down into the valley. We see a crowd with people gathered at the edge, looking at something right below. A group of people, filming a music video. The hero and heroine (yes, it’s that kind of music video) are both dressed in red: she in a bright sari, he in a silky shirt. New shoes, a golden necklace, perfect hairs.

“Camera!” “Sound!” The director, in a simple t-shirt and a scarf to protect from the sun. “Pani!” Bring some water.

Four kids have taken the front row. Concentrated, eyes fixed on the man and woman and the cameras.

The hero stops running his hand along the neck of the heroine; she changes posture, her bangles click click click against each other. Behind them, the Himalayas.

The team had been waiting for this morning. 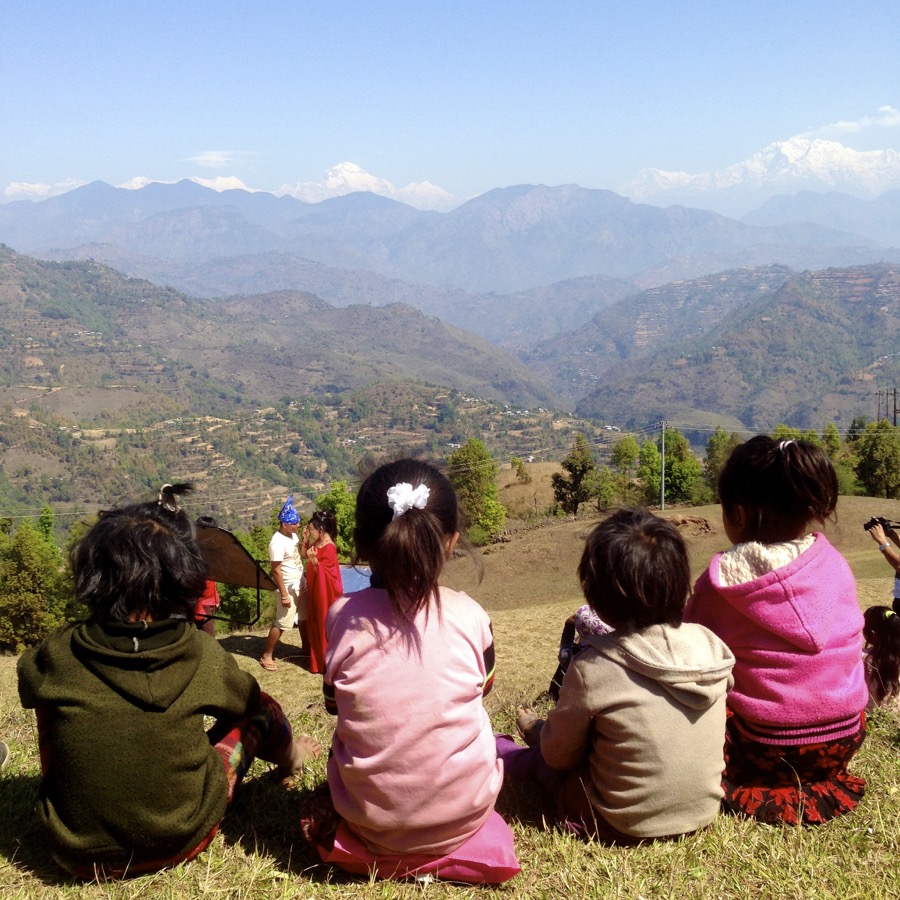 We walk off, the road takes us further. On our left and right: stone houses, more slopes, terraced farmland, winding roads, heavy stones keeping tin roofs in place. People seated under them, in the shade. Painted advertisements on the sides of houses: Tuborg, Tiger – “x-tra strong beer”, Maggi noodles.

As we pass by a steep decline, we see a cluster of houses at the bottom. There’s a mosque, a small one, with a tin roof and a bright green dome. A little ahead, right by the side of the road, a few stone tombs surrounded by wild grass and white flowers. Similar to so many burial grounds we’ve walked past in the Bangladeshi countryside. I wonder for a second: why there, right next to the road? What came first – the idea of burying people there, or the steps steps steps that eventually, with time, turned into a road?

We soon pass by another mosque – a white and green one, with Indian-style spires and painted crescents. Then, this house, right at the foot of a small climb. Pink walls. “Ya Muhammad”, “Ya Allah” written on either side of the entrance. Small painted mosques and domes decorating the facade. A girl seated outside, talking on the phone. 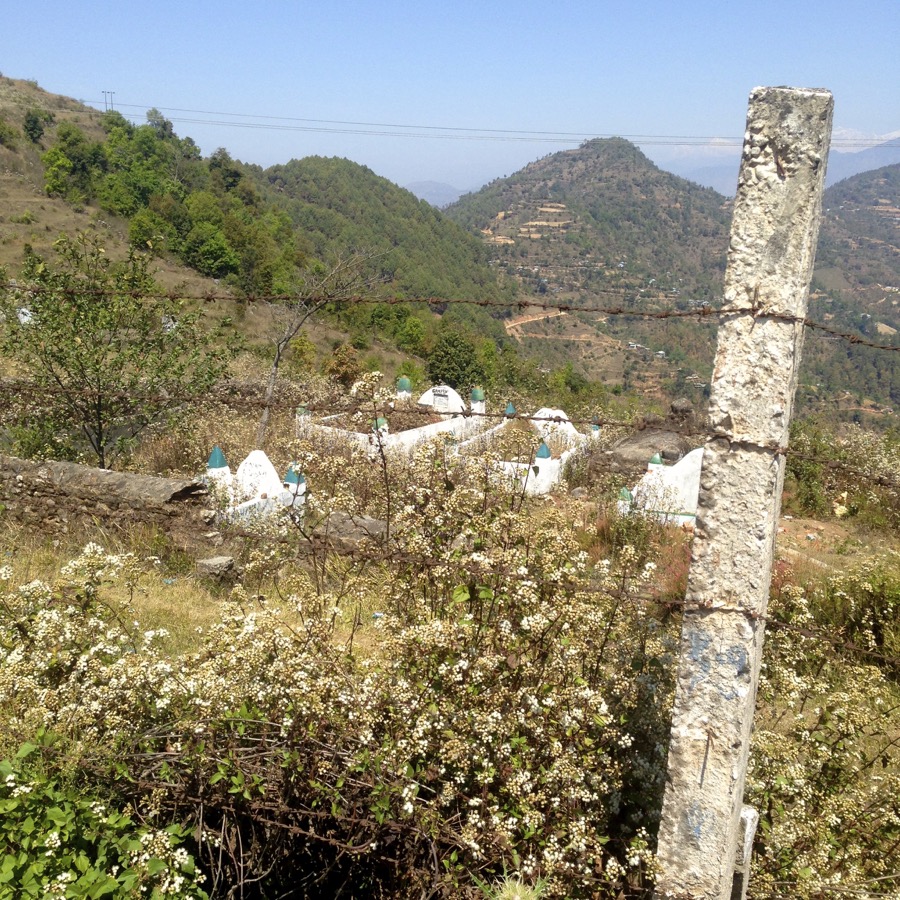 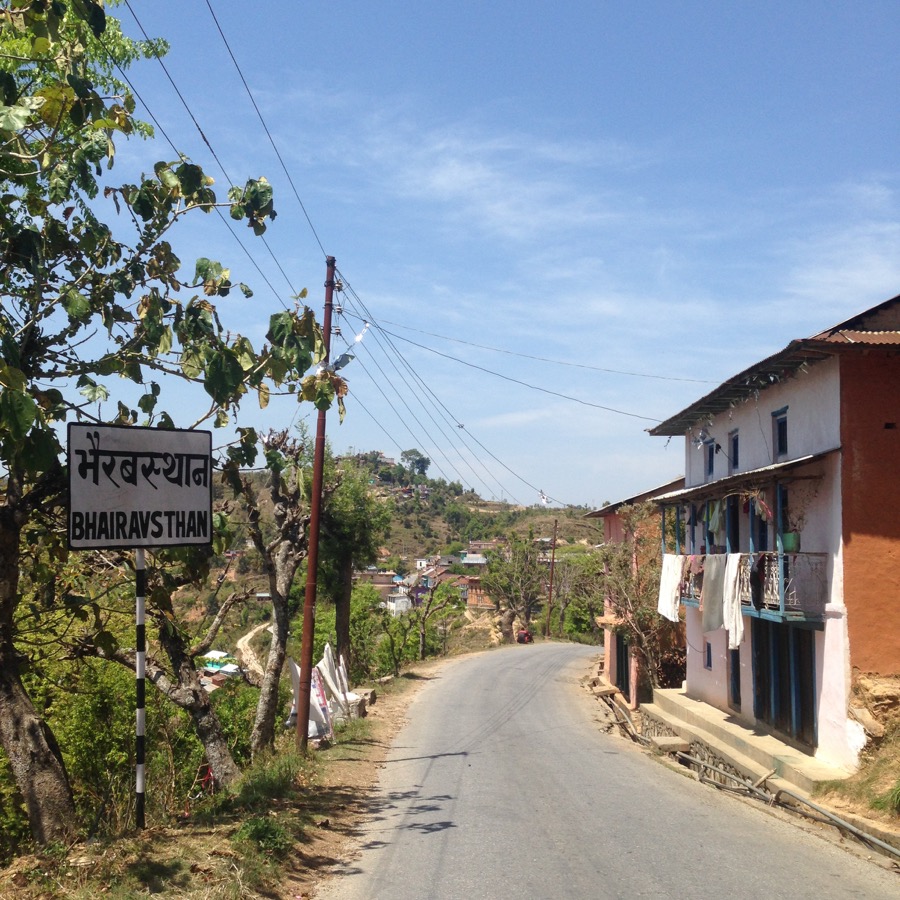 Not far now until we reach the temple devoted to Bhairava, one of Shiva’s incarnations. A few days earlier, outside the bakery on the main square in Tansen, two kids with cricket bats had told me about this temple. Gesturing intensively, they described the frightening idol inside: you can never never look at it – if you do, your eyesight will be gone forever. Forever! And even the pujari, the temple priest, covers his eyes as he makes puja.

We reach Bhairavistan, where the temple is. Still the same clear sky, the same sun warming our backs. The village houses lining the road are painted in white and pink, or warm shades of brown and terracotta.

Kids with blue uniforms walk past us on the way from school. Grandmothers with babies in their laps sit on their porches. There’s deep-fried pakhoras on offer outside a small eatery. A bus rushes past (the short piece of fairly straight road means accelerate, not slow down, as you enter the village). 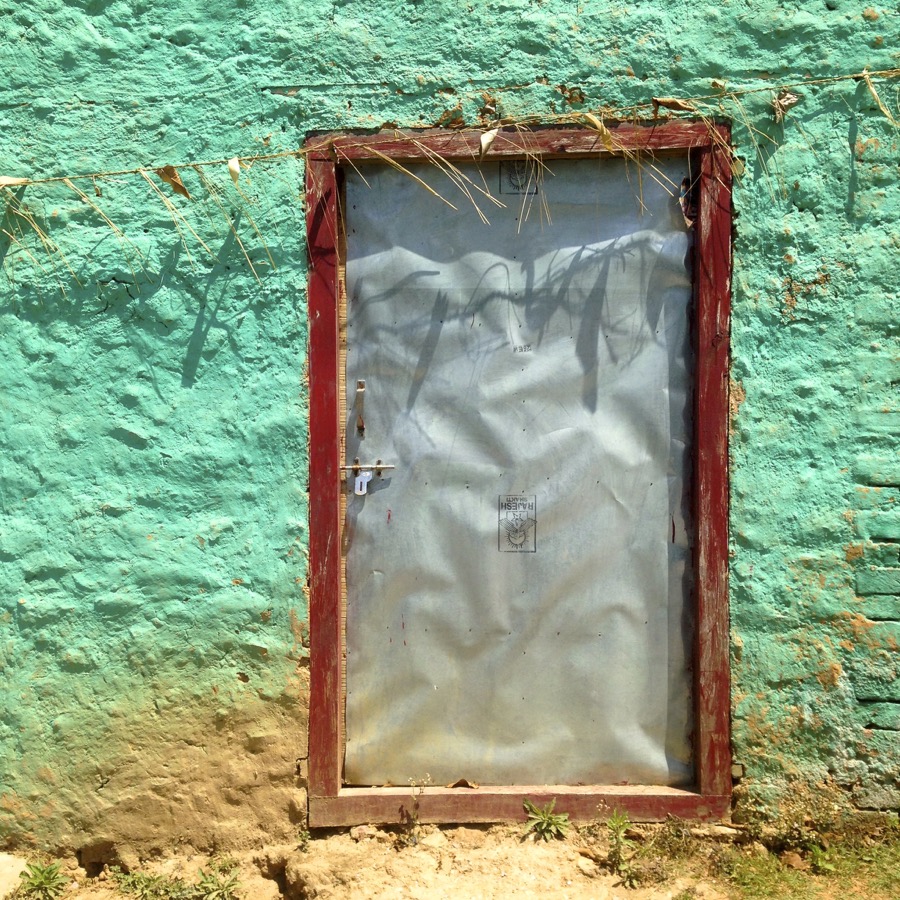 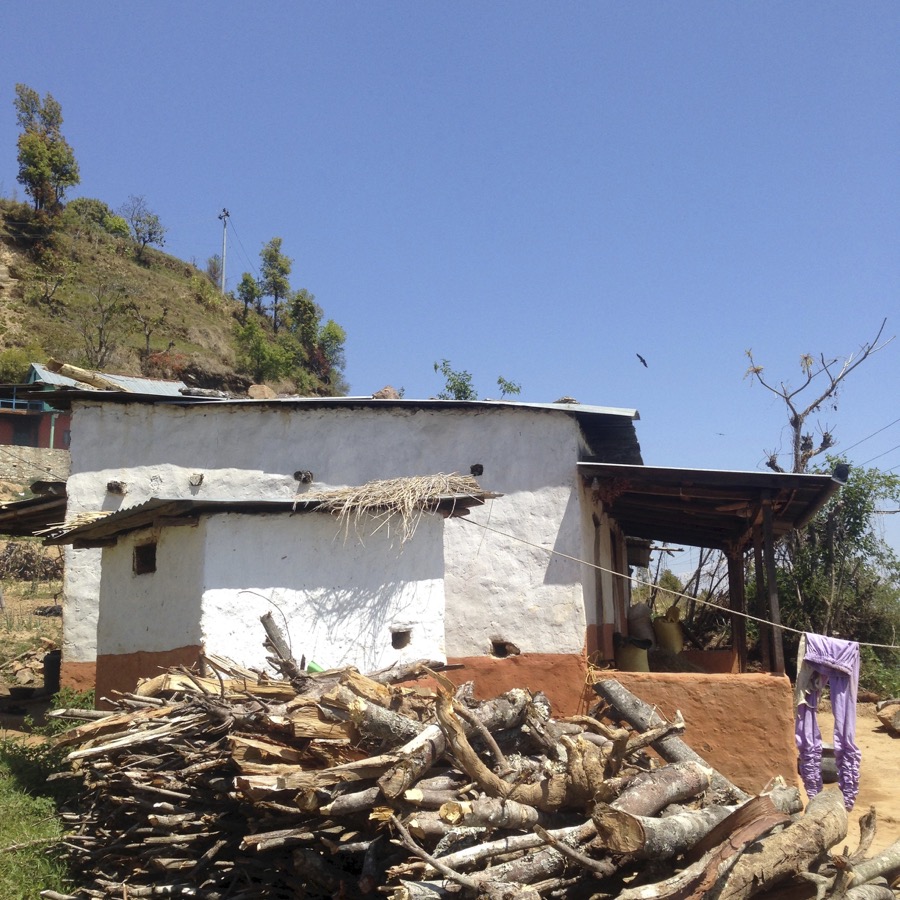 The temple is at the end of the village, up a series of flights of stairs. We walk up there. Even closer to the sky. I don’t know if this is how to describe it, but it feels lighter to breathe.

The temple, well, it’s a temple. Actually, we didn’t walk there too see it – we walked there to walk there.

A small doorway leads out to the backside. As I take it, three girls, dusty hair and bare feet, run past me. There’s a small wall outside, they climb over it.

It’s only outside that I hear the thumping sounds. Wooden hammers, in the hands of women, men, young girls and kids, crushing pieces of baked bricks. I climb the wall as well, to where they are working. All around them, piles with fine, orange gravel. 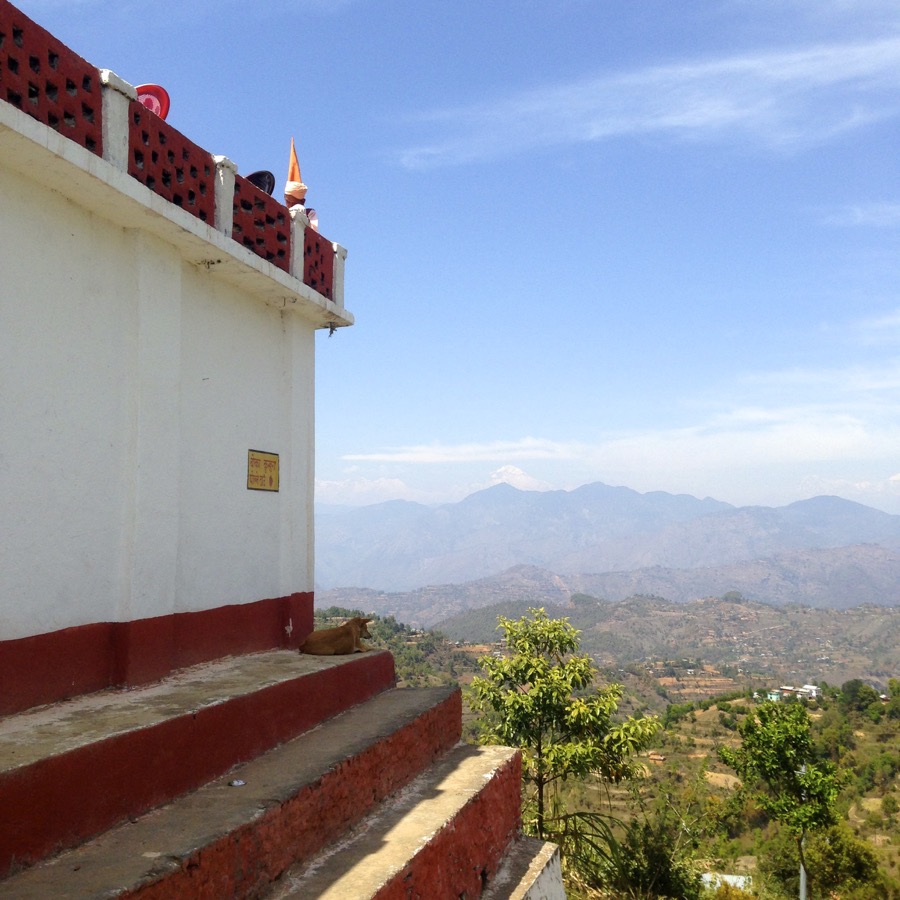 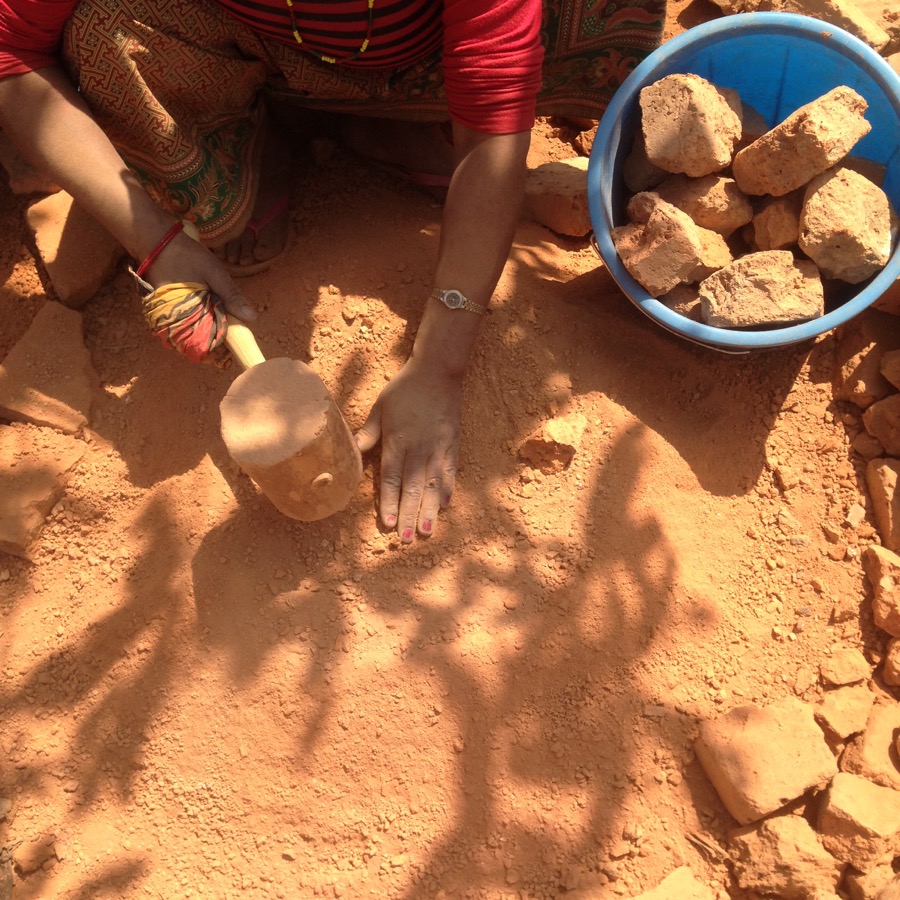 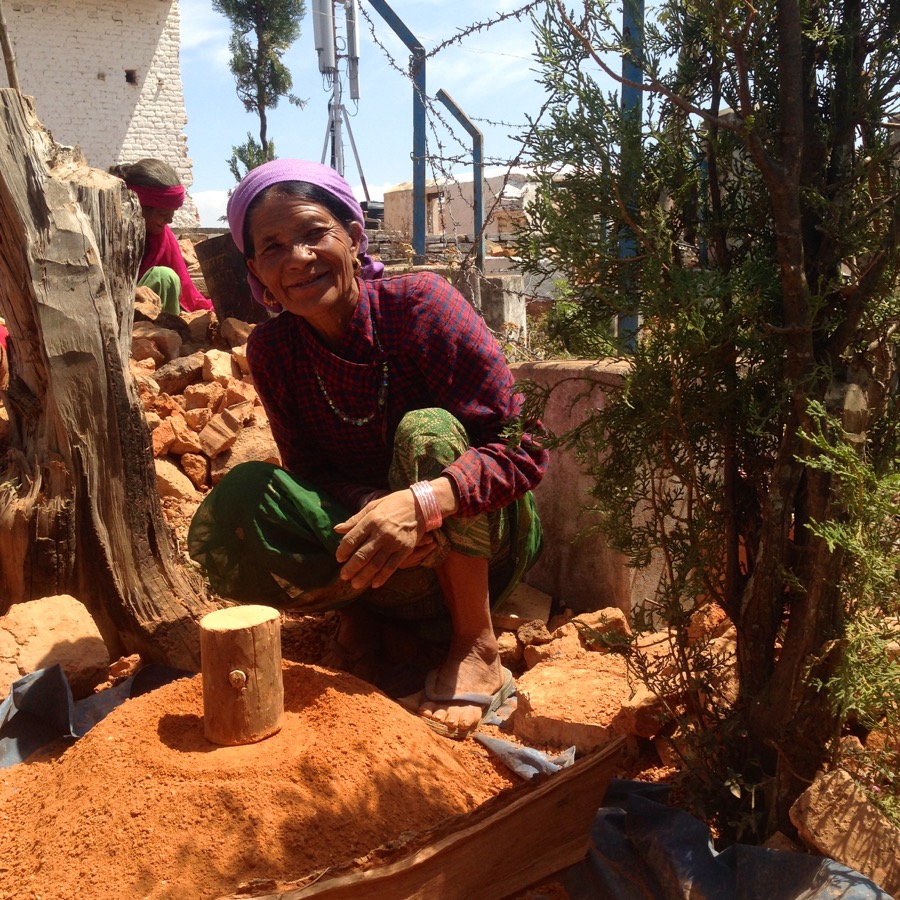 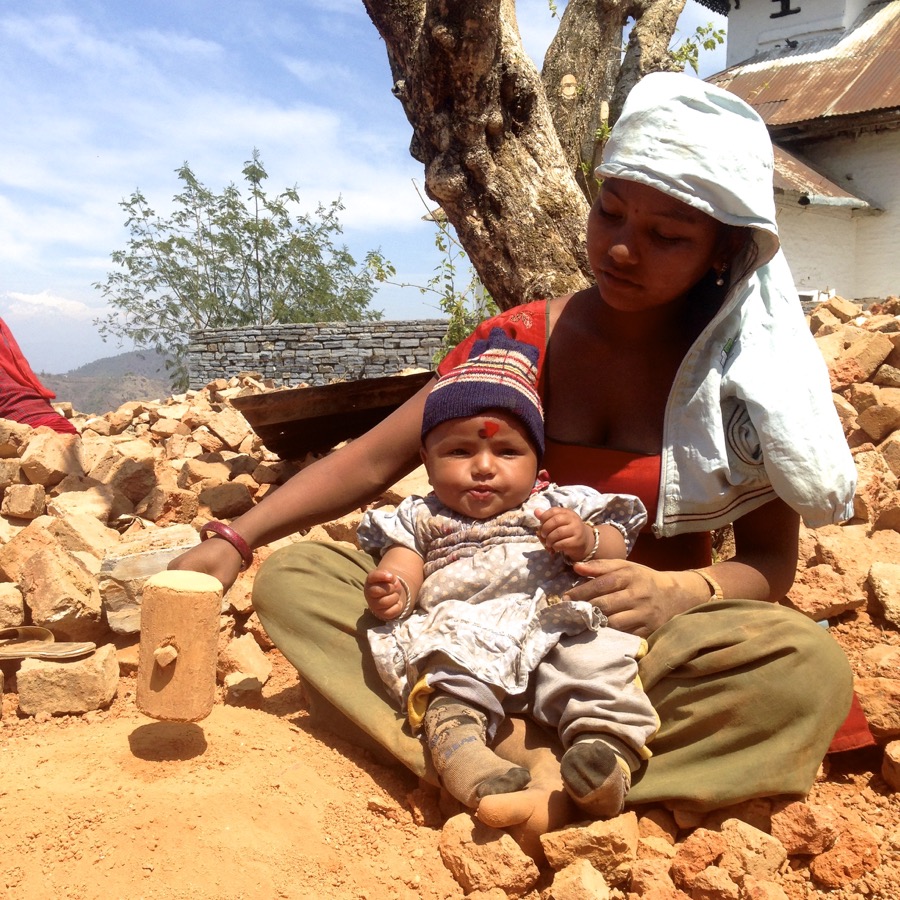 Bricks! We have been to so many brick fields in Bangladesh, for stories about the industry and how it’s affecting the workers and surrounding villages. So it feels a bit like coming home. They even use the same name, iter, in Nepali as in Bangla.

Some of the women crushing bricks are two generations older than me. I think about how many vessels with water they have fetched on early mornings, how many bundles of grass they have carried up the mountains, how many fields they have harvested with the Himalayas in the background.

One of the kids from the temple comes with a baby – chubby, with orange dust all over her blue dress. Her name is Angel, she says, and puts her in the lap of her mother, Soba, who continues smashing.

The sun is getting warmer. In the valley below, to where the crushed bricks are taken, new houses are being erected.

Later in the afternoon, back in Tansen, we buy cups of tea and bring them outside to sit down on the side of the street. A man comes walking, stops to talk. His name is Waibe Rana, he’s a retired army man – Nepalese, but retired from the Indian army.

“I served in the Indian army for 26 years. I served in two wars, Indo-Pak 1965 and 1971. After the fighting ended, we had to stay for long on the border to keep up the defence. I still remember everything. Sometimes I wake up at night and think that I’m shooting.”

He tells us he has six kids. All grown up now.

“My daughter lives nearby, in Butwal. My eldest son works in Kathmandu, he sends people to work in other countries. All kinds of places – Malaysia, Dubai, Saudi Arabia. My four other sons are all in the Indian army.”

It’s been 24 years since he retired. It doesn’t look like it, I say.

“Maybe. It’s because we used to exercise every morning. Running, weightlifting. I still ride my bicycle.”

He looks at the counter inside the small eatery, with samosas, deep-fried snacks and metal trays with sweets made from milk and sugar.

“I’m going to buy some sweets and bring home,” he says.

He points at the sticky jalebi and smiles.

“A foreigner in Delhi walks up to the sweetwallah and asks what these are called. You know what he says? One round, then another round, then full stop.”

Up at the town square, before we head back to the family, I see a father with a small boy. They walk in the direction of the bakery, with its big doors open towards the square. The son wears a sweatshirt that says “Smile!”. He holds the hand of his father; each step he takes, eyes fixed on the bakery.

As they walk inside, I see him get up on his toes and grab the counter. His father pays, hands him something balancing on a piece of paper. They step out, down the stairs, and walk in the same direction they came: the boy holding on to a chocolate cake with both hands, smiling just like his sweatshirt says; the father, with so much love, holding on to his son.