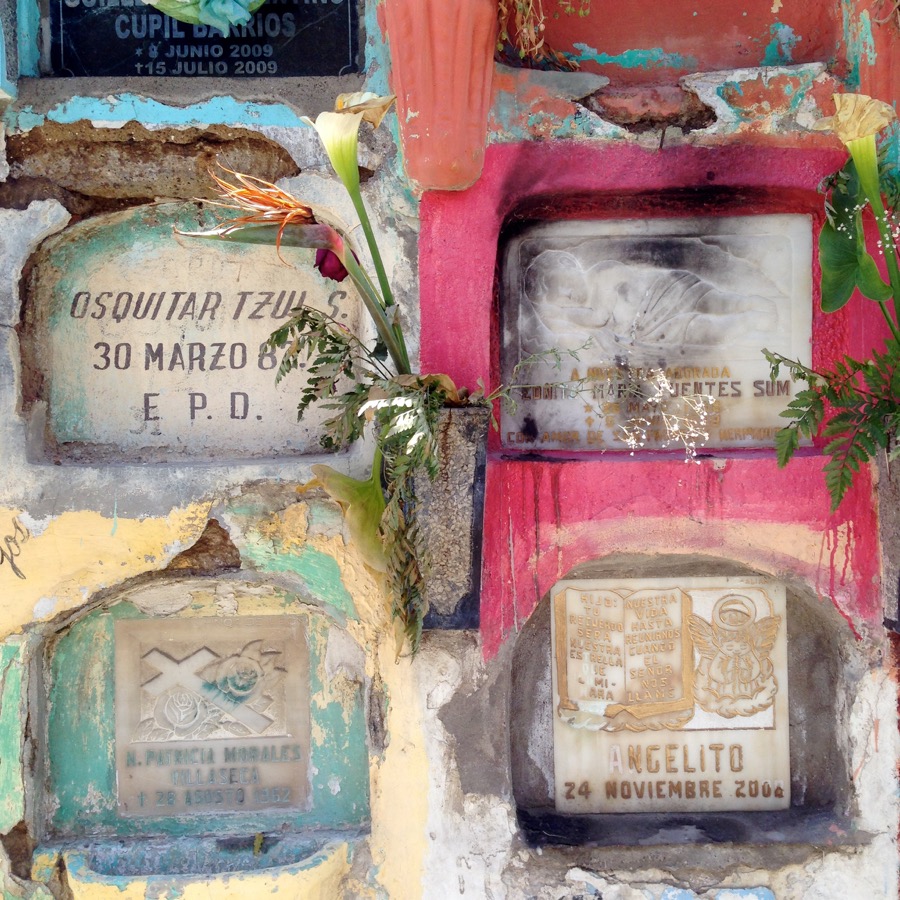 Cemeteries are not for the dead. If anything, they are for us, the living. They are welcoming spaces, despite what comic books and ghost stories have led us to belive. They are places that allow us to imagine things. Other realities, other worlds. Those of the past, of people we have never met, homes we have never visited.

I love the big cemetery in Zagreb, set on a hill overlooking the city (I love the road to get up there as well, which takes you through overcast residential areas and unkept greenery). When I jumped from night train to night train going from Croatia to Syria a few years back, I walked around for hours among the monuments and war memorials and golden statues up there.

There’s a beautiful graveyard in Sur in southern Lebanon, just nearby the sea, with two parts: a Muslim one and a Christian one, for both communities to bury their people side by side. It was hot last time I was there, in July or August last year, it was Ramadan I remember, and there was an old man in a plastic chair singing (it was reciting I guess, but his voice was singing) from the Quran for his buried son.

In Chittagong in eastern Bangladesh, the war cemetery set up after World War II is like a piece of paper ripped out from a history book. It has modest graves, lined up next to each other in perfect rows. They look the same but bear different names – Indian, British, Japanese, from soldiers who died in the forests and mountains and waters surrounding the city. 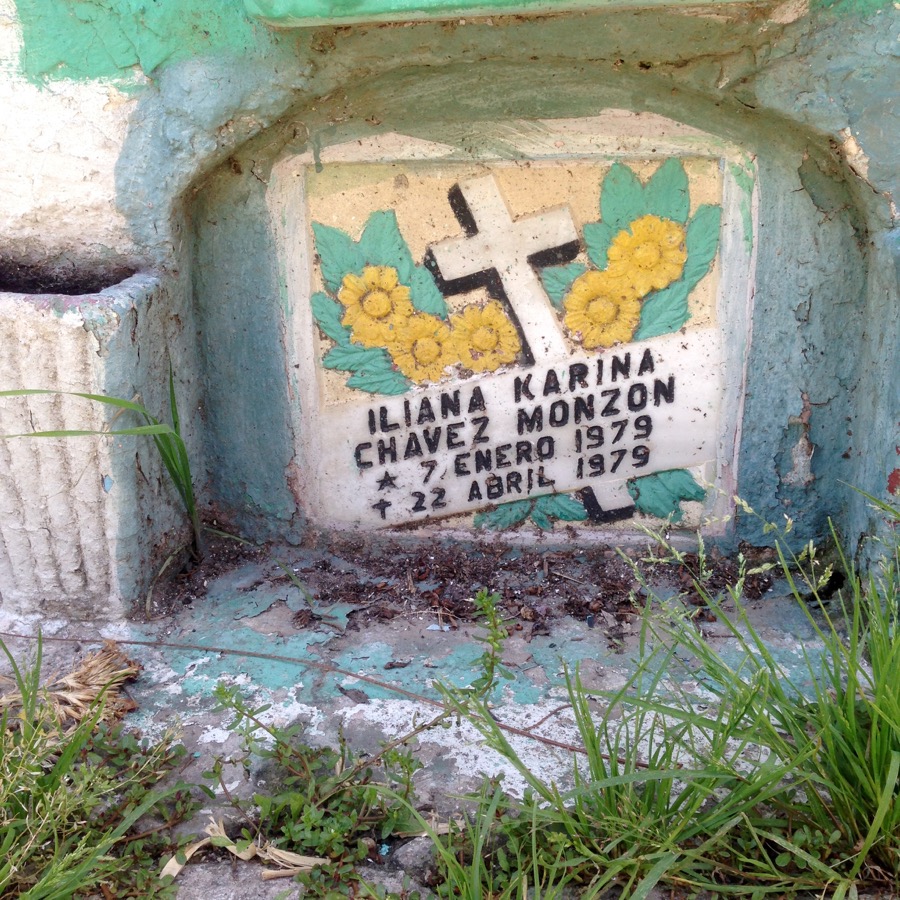 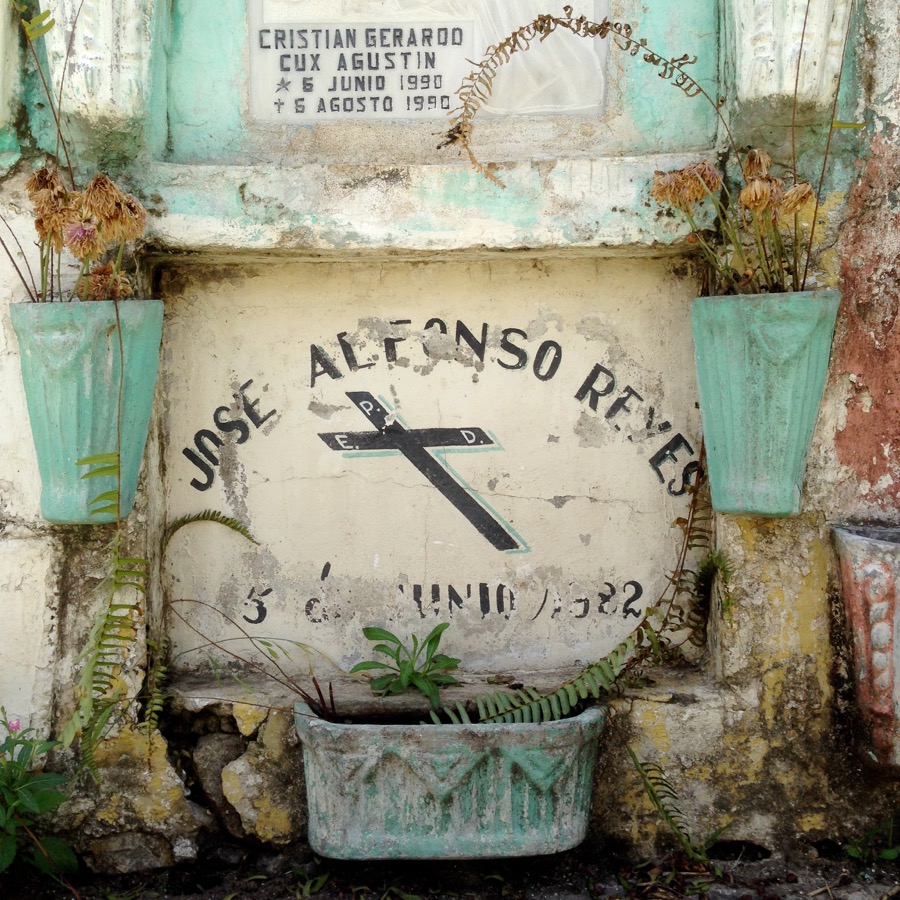 In Guatemala, the cemeteries are bathing in colour. Turquiose, pink, soft white and layers of green. Small graveyards in mountain villages hide among the trees; burial grounds in the cities are vast and busy. Like the cemetery in Quetzaltenango, Guatemala’s 2nd largest (but low-key and unhurried, with quiet, small-town streets) city.

The dead of Quetzaltenango (or Xela, the shorter name of this mountainous city) have a peaceful resting place – bright and green, frequented by wandering visitors. I don’t know which part is best to sleep in – the main area, where box-like graves in all imaginable colours are stacked on top of each other, or the hilly, unkept parts in the back, where the graves are half-covered in greenery. In the front, there are large monuments for important families: pyramids and gothic tombs, with stony statues guarding the entrances. The graves in the back are simple, with almost invisible paths leading in between them. Tracks of the kind you can’t see, but only find through following the instincts of your feet. 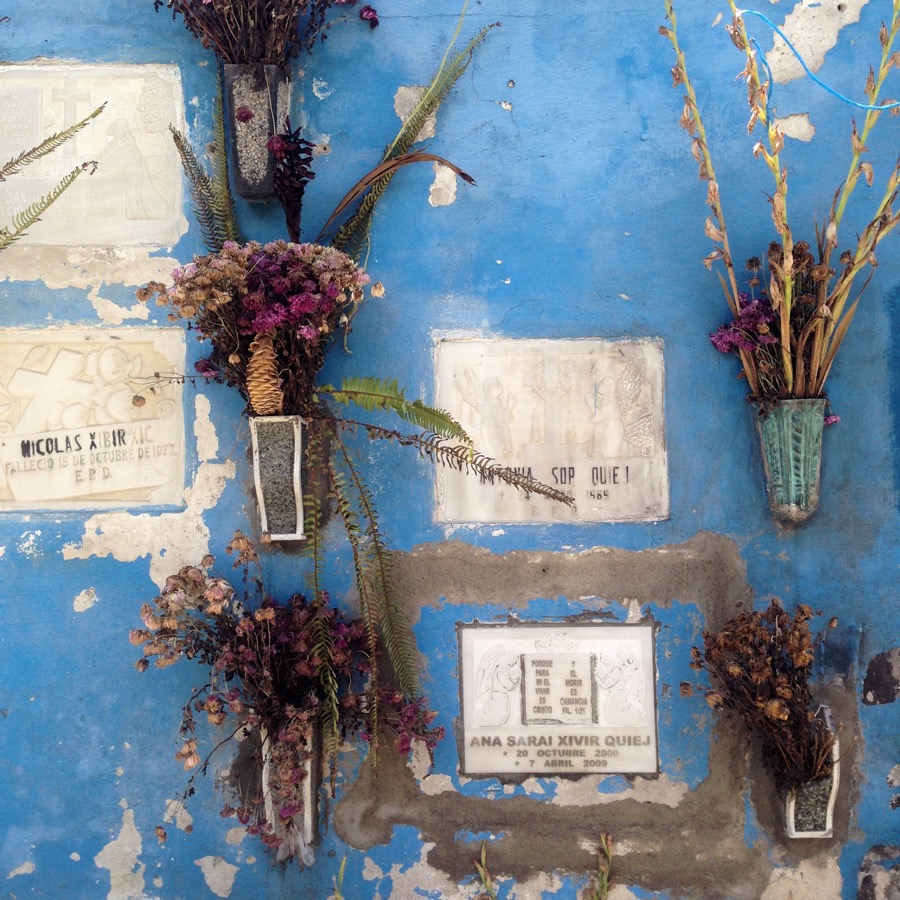 There are flowers everywhere. Brought by visitors, picked in gardens or meadows – or bought from the ladies outside, the ladies seated on the pavement in front of the church, in a sea of blossoms and bouquets.

To walk around Xela’s cemetery is a bit like meeting the people who rest there. 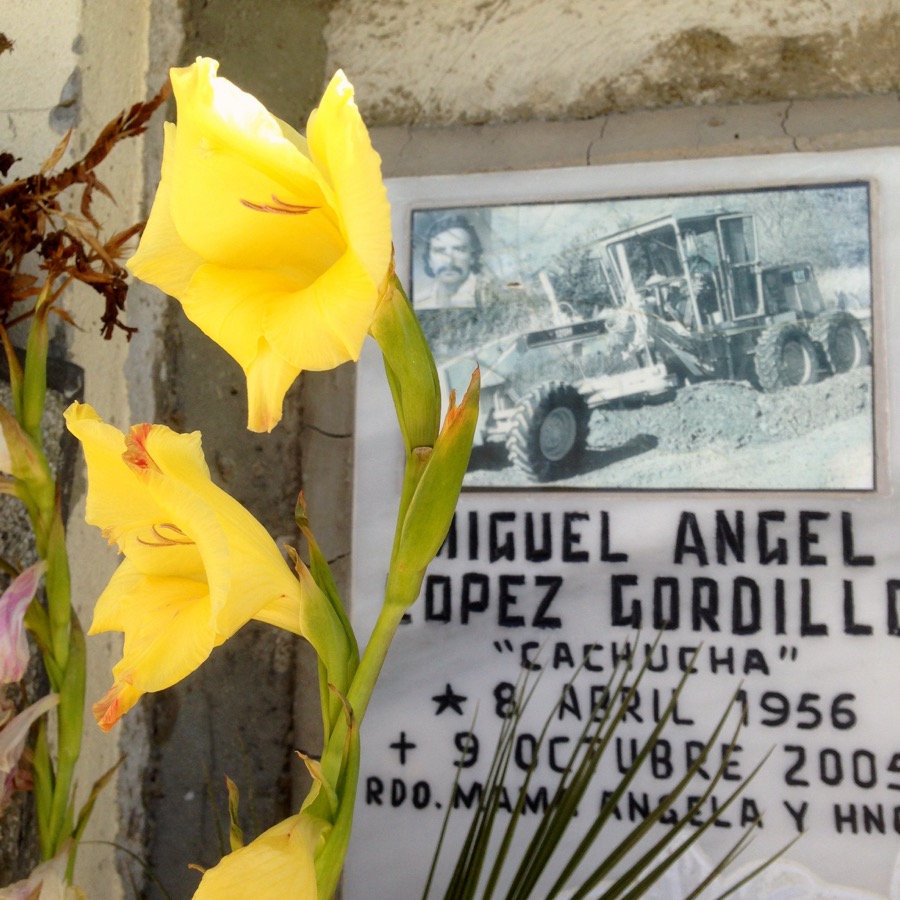 Like Miguel Angel Lopez Gordilla – “Cachucha” – who once was the owner a great tractor. 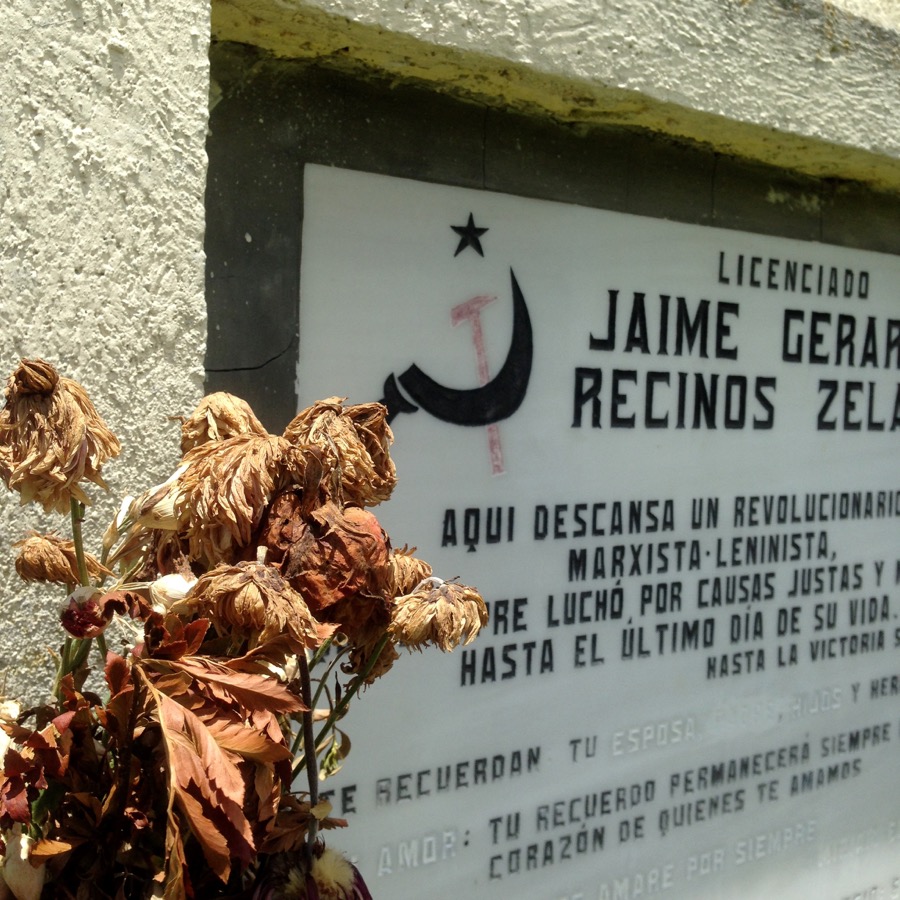 Or Jaime, a proud revolutionary Marxist-Leninist. 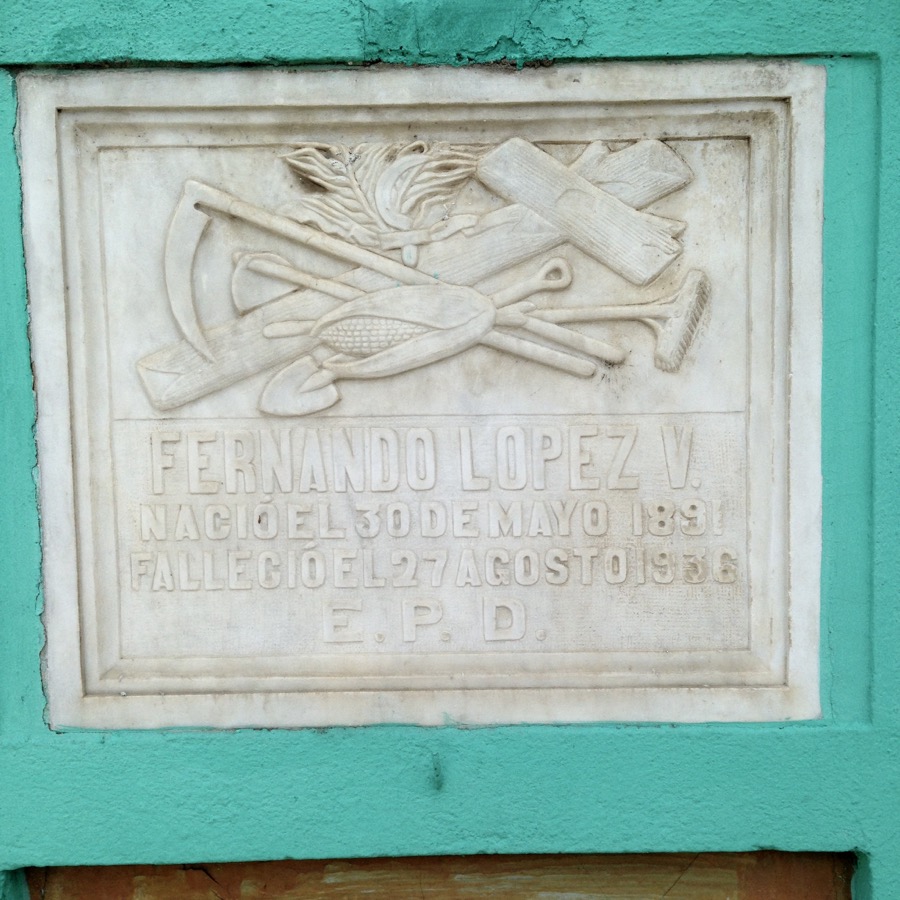 Fernando Lopez, who passed away in the early 1900s, was a farmer. A Guatemalan farmer, a Man of Maize. 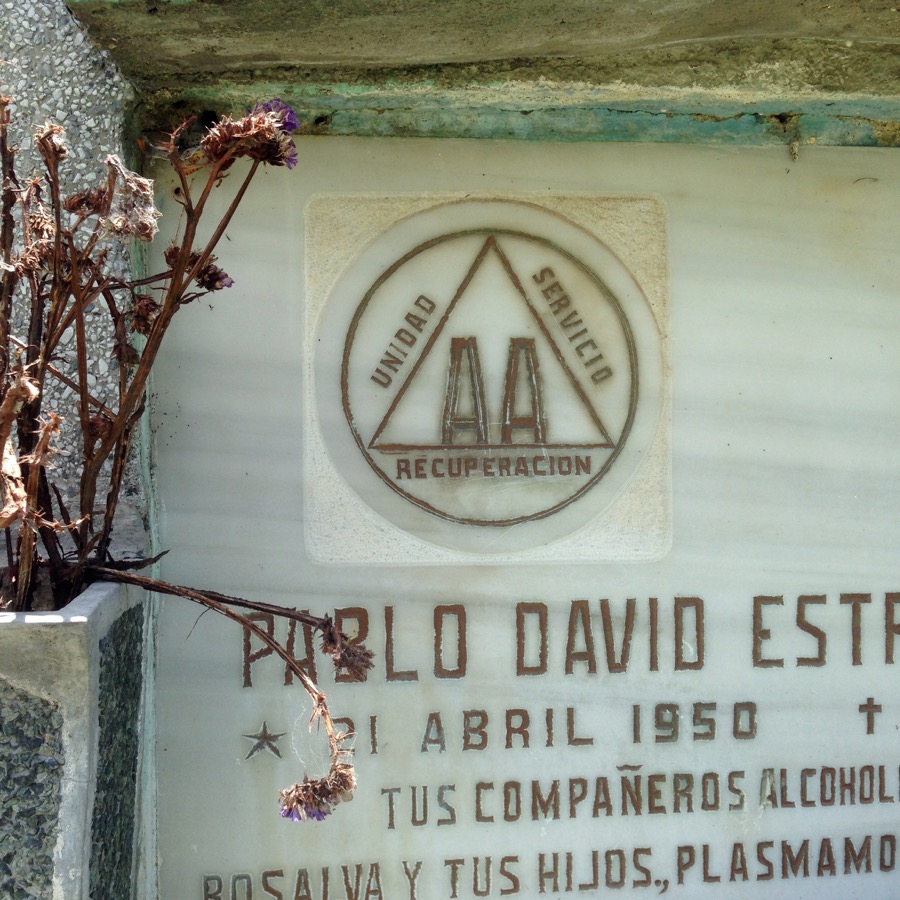 Just like Pablo David was a man of “Solo para hoy”, Only for today. 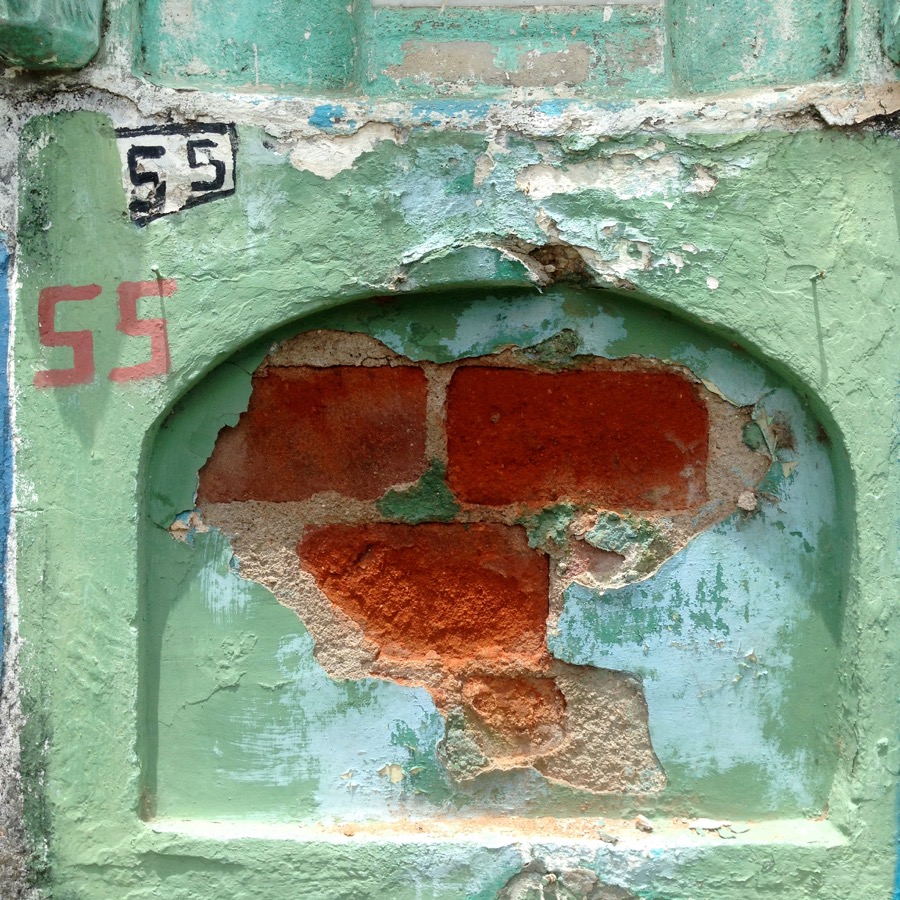 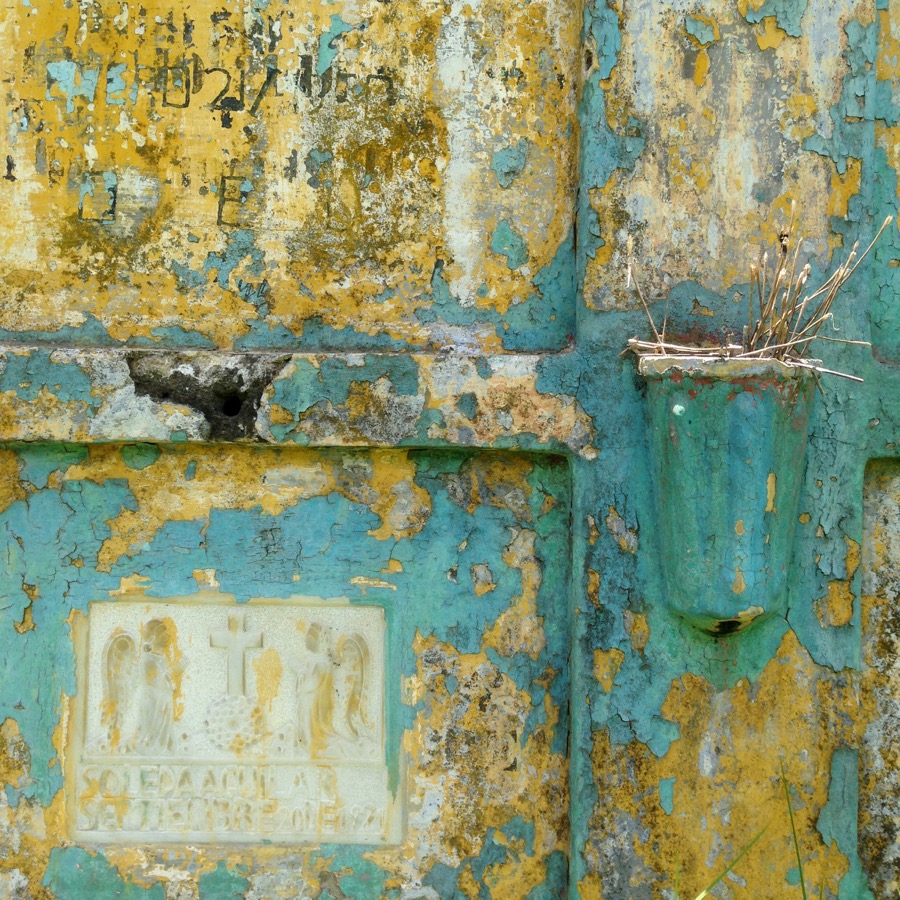 Then, there are those whose names have faded into memory. 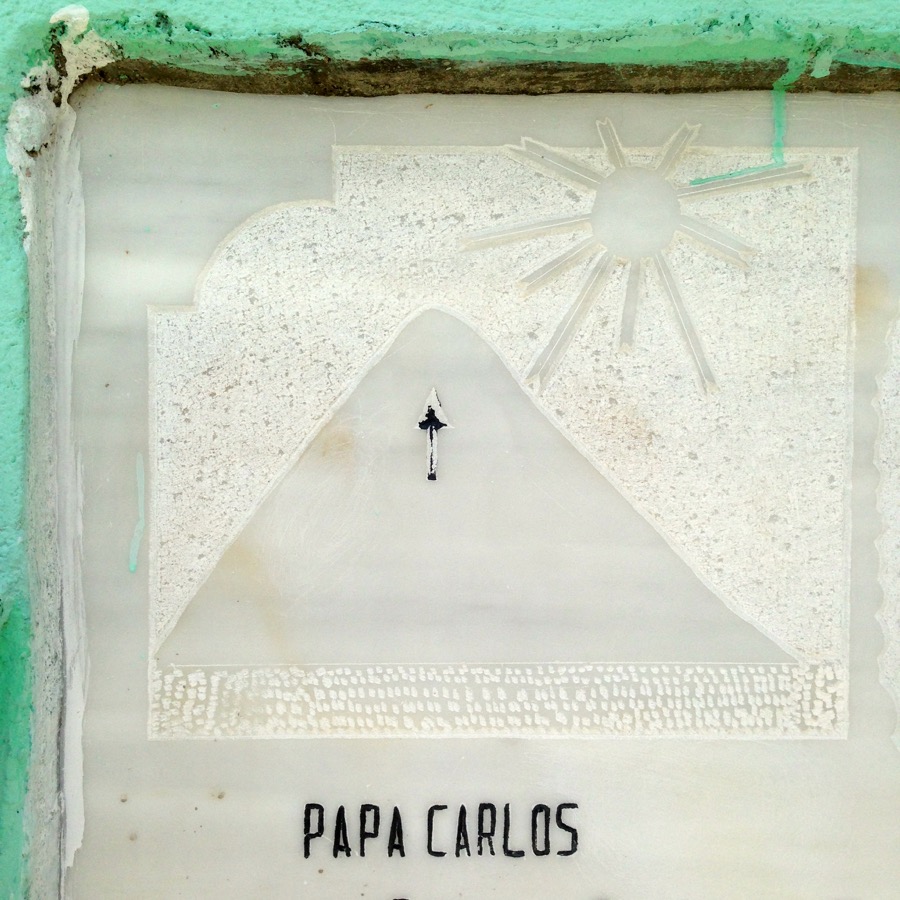 And Papa Carlos and his pyramid. 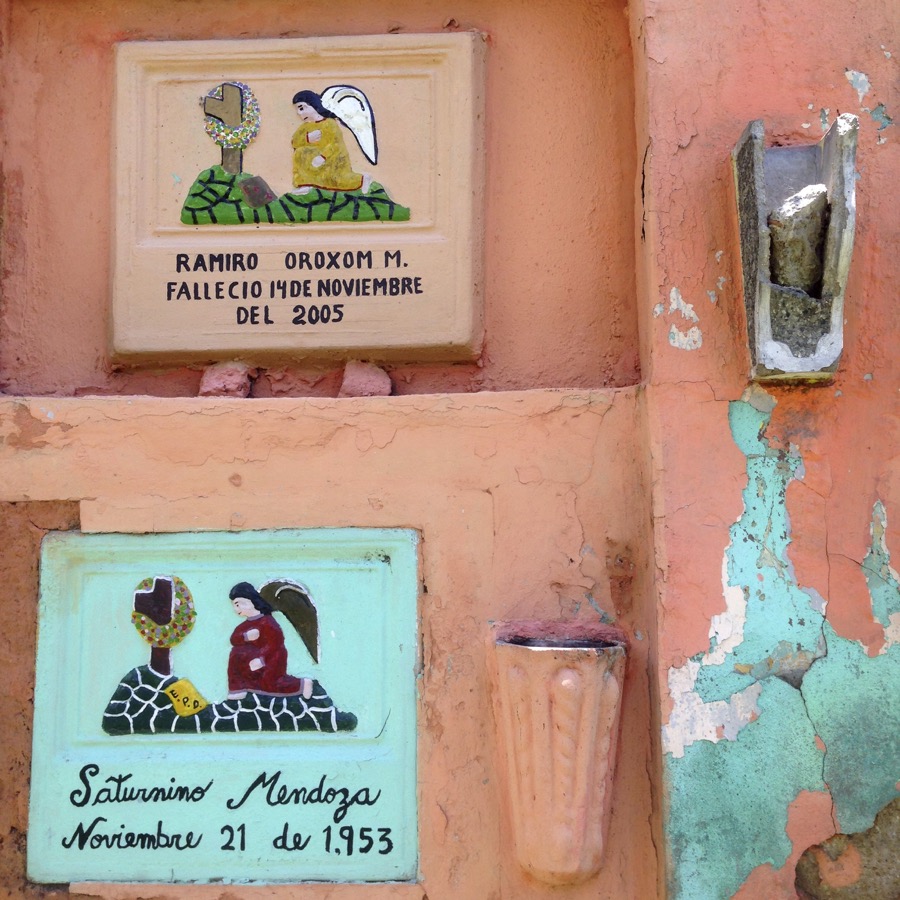 Those who have angels watching over them. 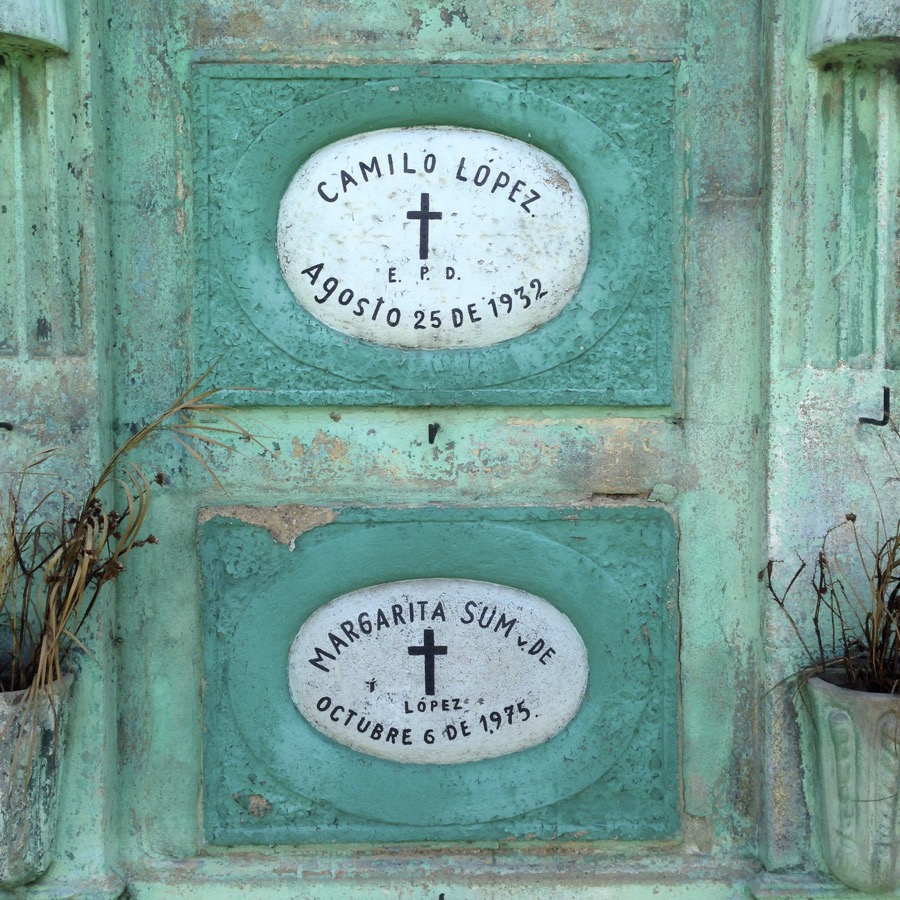 Those who support each other. 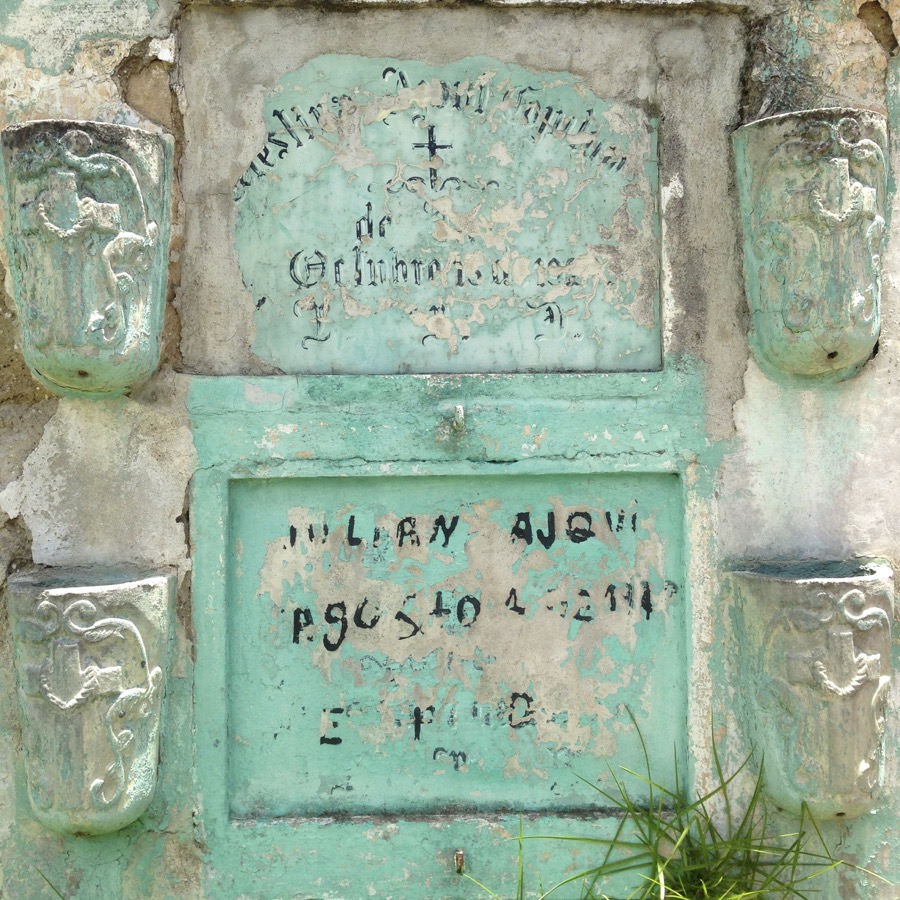 Those who have sunk into oblivion. 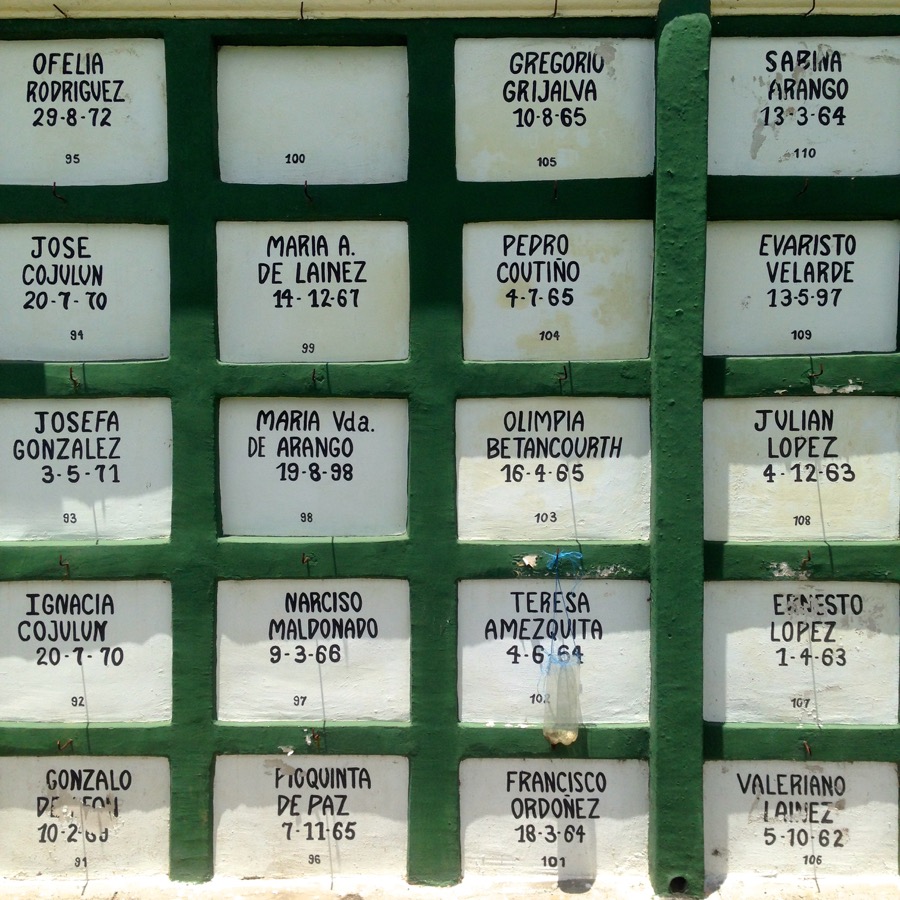 And those who are waiting for number 100 to join in.