Lately, for different reasons, Aleppo has been on my mind. I have been carrying a book around (wrapped in a piece of fabric – it’s a hard cover and has a personal dedication on the first page, and I’ve borrowed it from its owner and want to take care of it), written by a Swede: Annika Rabo, an anthropologist who spent months, years, in Aleppo’s souks researching the social bonds and practices of the city’s traders and shop keepers. 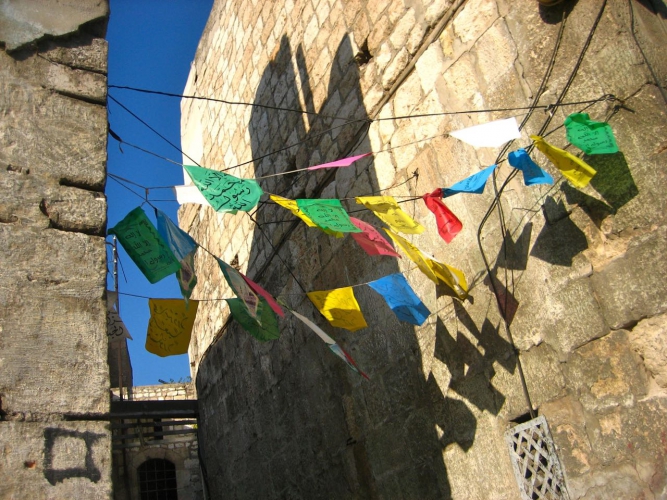 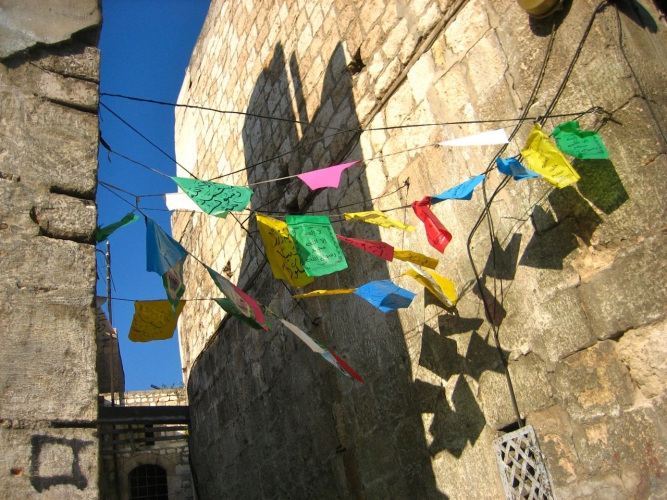 When you carry a book around, even when you don’t sit down and read it, you are in a way connected to its stories. The people figuring in it, the places described. It seems they become part of your conscience, part of what moves around in your mind.

So I’ve come to talk to people about Aleppo. There are many people in Beirut with a connection to Aleppo – the city is not more than a couple of hours away (had the roads been clear and borders open and had there not been people trying to stop that journey, cut us off from each other) and many have family on the other side. Or today, with so many Syrian refugees in Lebanon, they used to live there before the war. 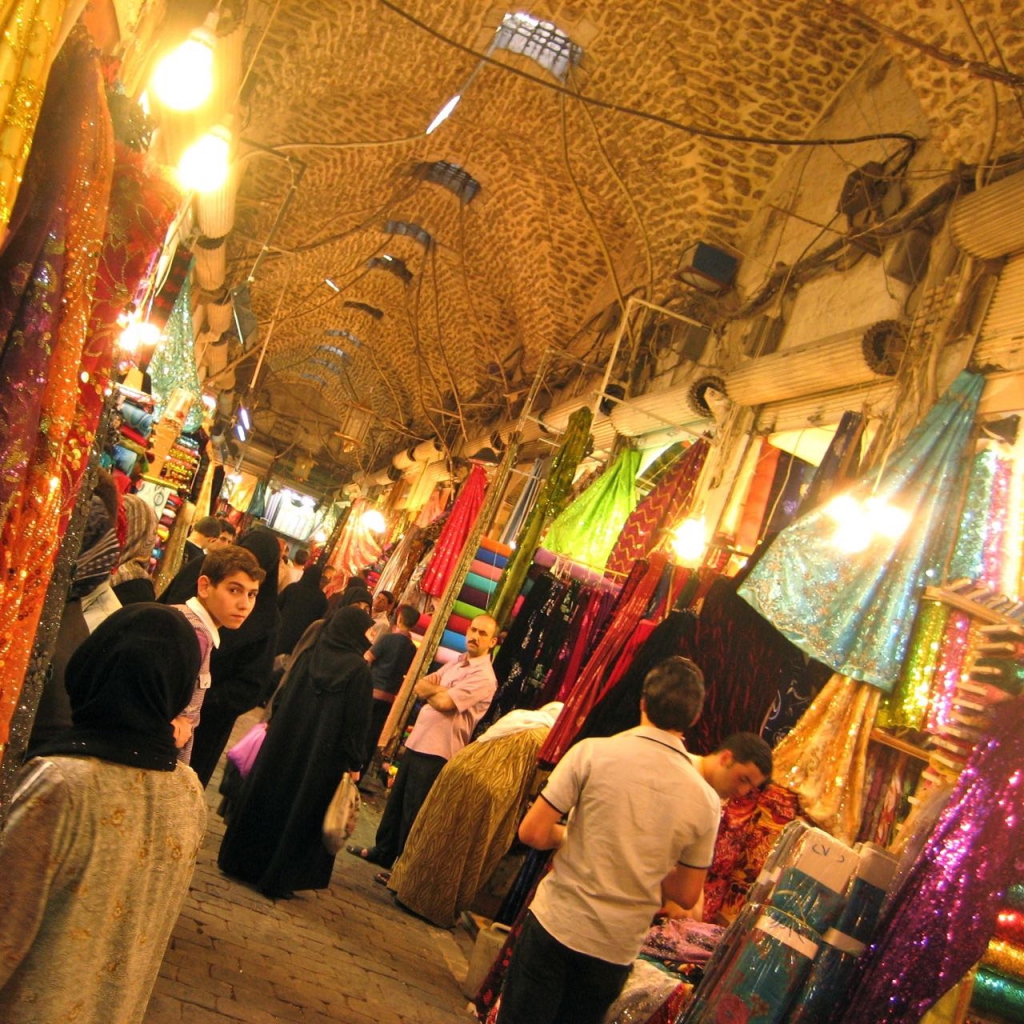 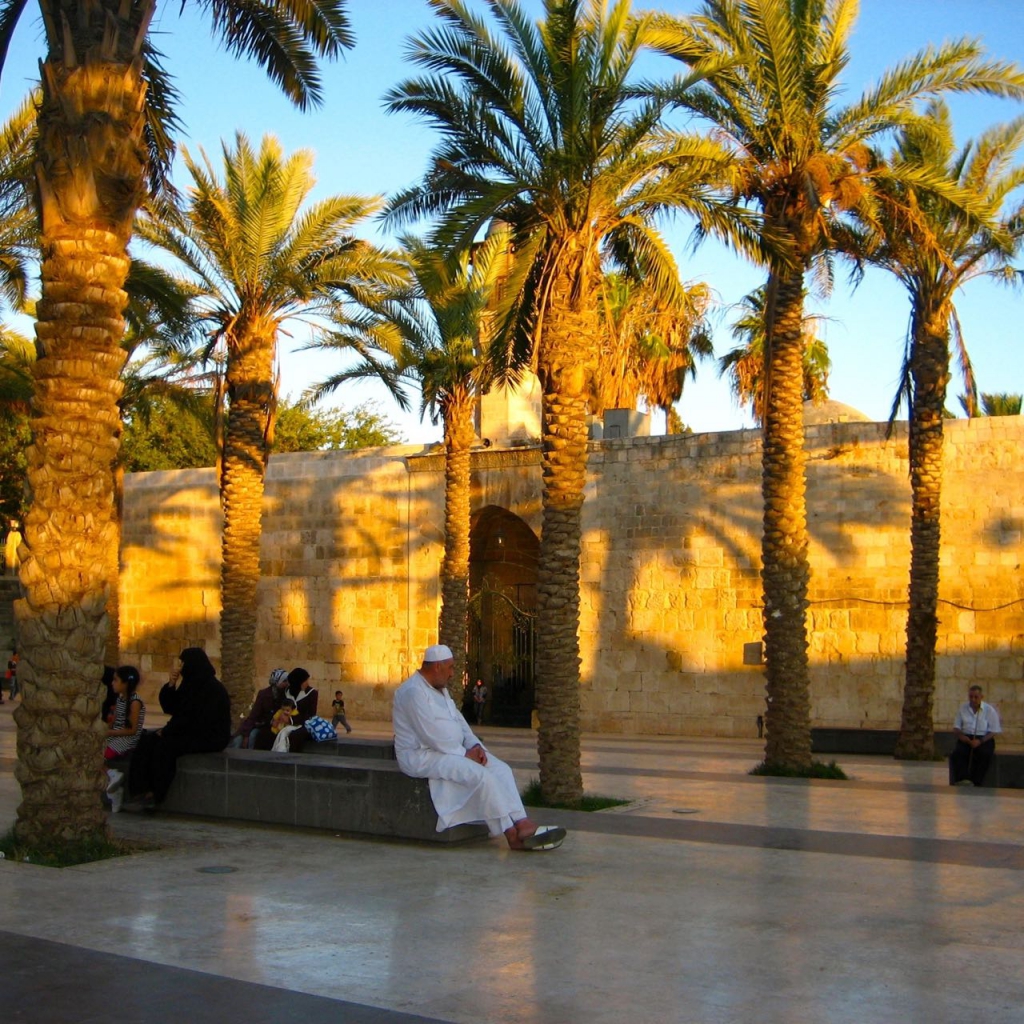 One of them is Omar, who used to be a university student in Damascus; now he’s working six or seven (can’t remember) days a week in a falafel place in Beirut. It’s nearby a main intersection at the beginning of Hamra, and the traffic outside really never stops. It slows down, but doesn’t stop. For the falafel joint it’s good I suppose, people even have time to order and get their food without leaving their car during the worst jams. I’ve talked to Omar about Aleppo, his hometown, but lately we’ve talked more about other things.

About his passport – which has been with the security authorities in Beirut for several months, they refuse to hand it back to him each time he comes to claim it; “Next time,” they say, or “You don’t need it anyway,” and without it he hasn’t been able to go to Damascus for his finals at university, which is messing up all his studies – or about his brother – he left a couple of days ago, thanks to 2500 dollars Omar saved and donated, to try and make his way to Germany and seek asylum, now he’s in Serbia waiting for a friend.

I also talked about Aleppo with Ghassan, a friend and one of the group of people I run with in the mornings. He’s Lebanese, has all his life in Beirut and always had, but has a mother who was born in Aleppo. The family went there as kids, but these days they don’t. Of course. No one does.

But Aleppo used to be a place you went. Always. It was welcoming place, hospitable, sweet and kind. Aleppo to me will always be a serene (and dusty, worn and torn) place, with alleyways and roads that keeps leading you on.

To that small eatery on the square where bakers hang (or hung? I don’t know if they still do) their bread to dry on benches in the sun, where you would order small plates of foul with cumin and chilli. 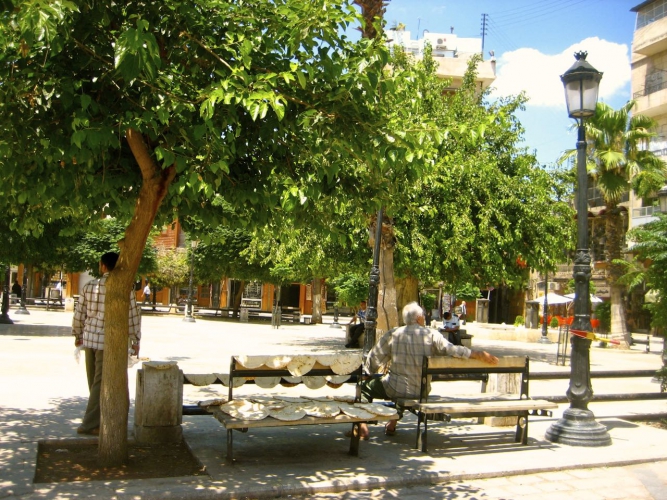 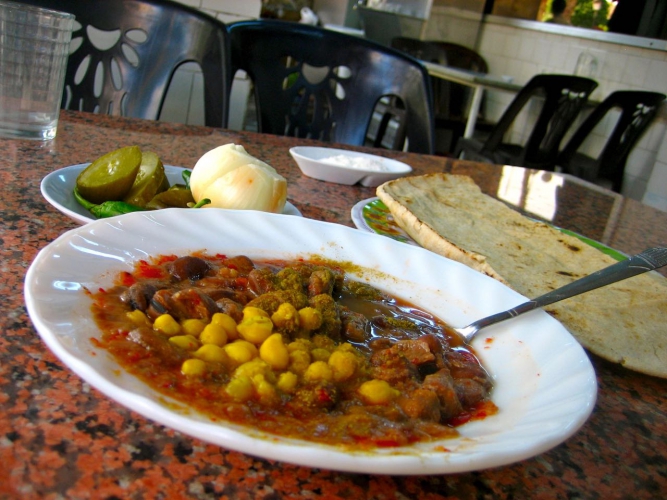 To the park with a myriad of paths leading through it, and families spread out on the grass. To that space outside the mosque near the citadel where the afternoon sun is soft and warm.

To the beautifully kept (it was) Armenian church, overlooked by a man resting on a chair outside. 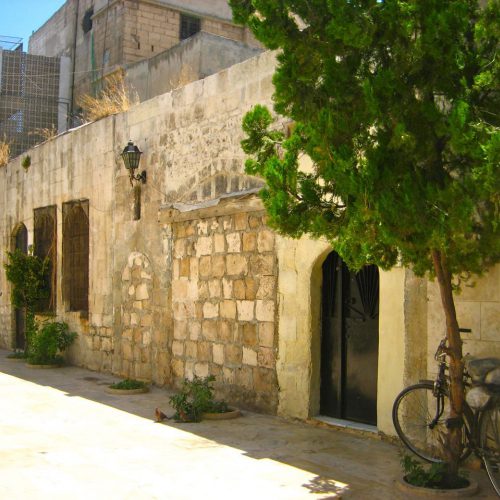 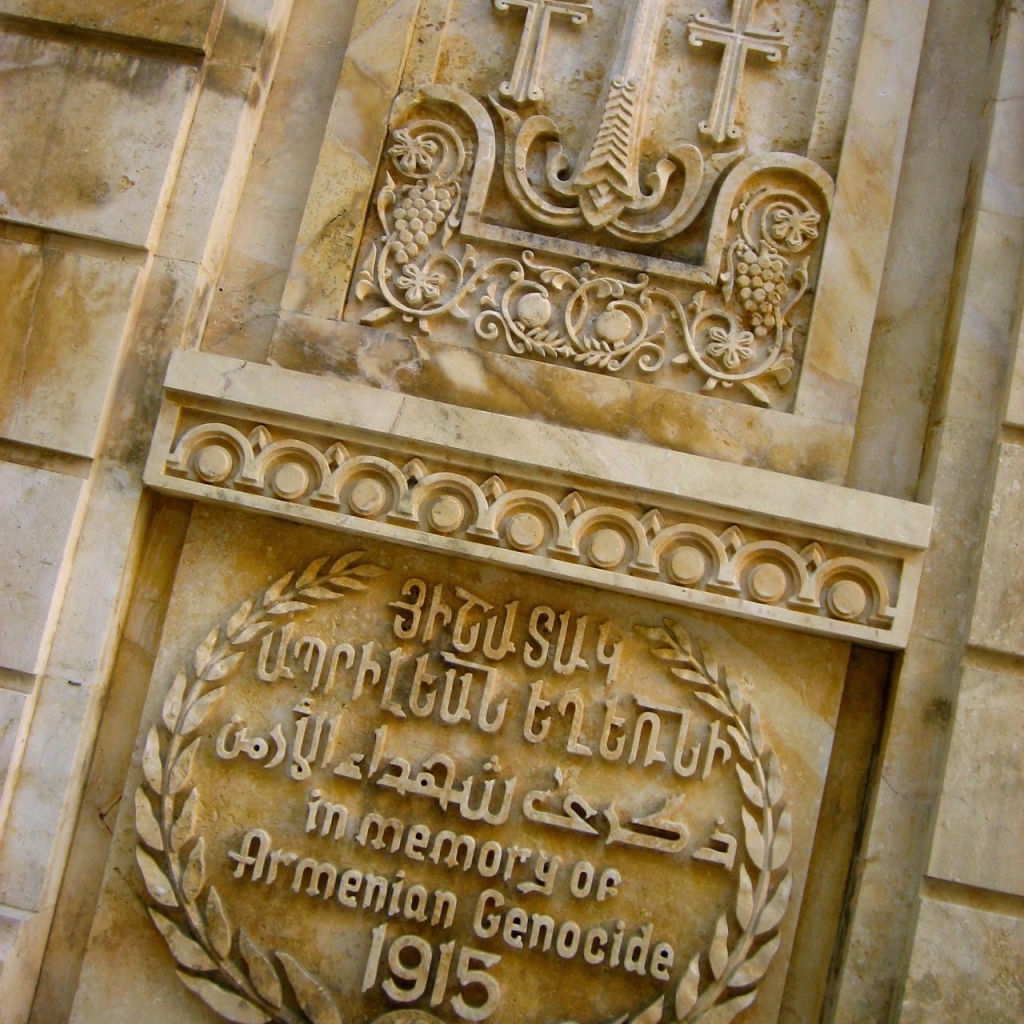 To the shady alleys behind the souk, where kids would run around with t-shirts of Ronaldo and Messi – and that’s also where all the workshops are (were?), small rooms with one open wall and old radios and a mess of tools and half-finished projects in wood or metal.

Aleppo really was a place you went. Since long back in history (possibly longer than any other city that’s alive today, which makes the current division and destruction painful even more), when it was at the centre of important trading routes. So when you buy an orange (or bought, because few people go there to buy oranges today) from a cart in Aleppo, you don’t just buy any orange on any street, you’re part of something that’s been going on since much longer back than any of us can remember.

I suppose that’s why people are mourning this city. The destroyed souk, the demolished houses. The physical destruction – because it’s not only about crumbling stones, it’s the continuous memory of life that once was. The pieces that were left behind, passed down to us by those who left.

When I think about Aleppo, I remember the people at the hotel I stayed a couple of times, an old building with beautiful windows and small rooms overlooking life on the rooftops across the street. I open Google Maps to find it, because I forgot its name. It’s there, right north of Al-Mutanabbi Street, not far from one of the few ATMs that used to always have money when you needed to withdraw, and nearby the street with all the night-open barbeque and mezze places. Qasr Al-Andalus, yes that’s how it’s called. It’s weird because on the map it looks like nothing has changed. The phone number is even there – I wonder if the old man and his young employee are (I don’t remember their names either, and Google won’t be as helpful with that); the two of them who were immensely sweet and let me come and use the shower and kitchen once when I was only traveling through, not staying the night, and who a previous time, when finding out that I was leaving, ran down to the market to get eggs and cheese and bread and olives and prepared a breakfast that I Absolutely And With No Excuse And No Exception had to eat before leaving. I wonder about them. I hope they are well. 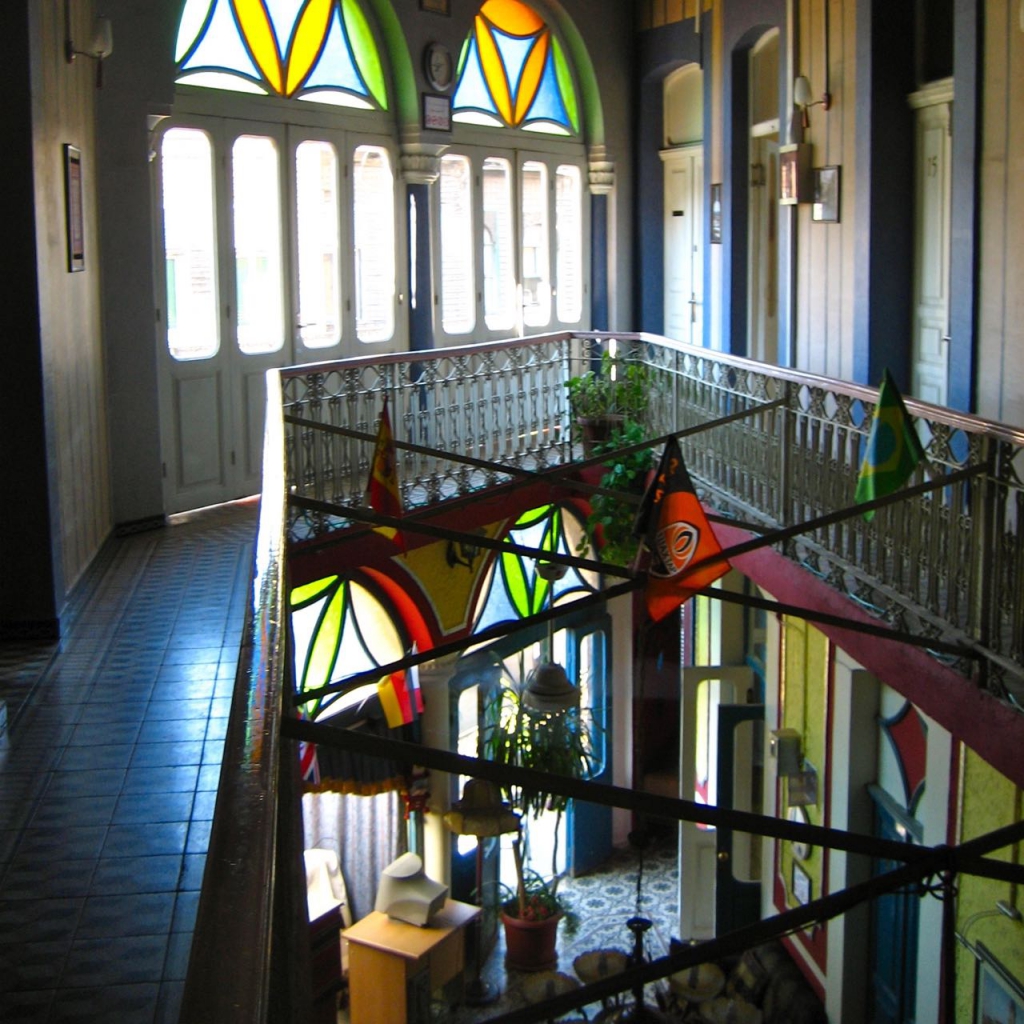 I also remember others, from that trip with the breakfast I think, when I had the company of a British girl I had just met in Turkey. We arrived in Aleppo together, spent a day before parting ways. We walked around I remember, and took a break at that park I mentioned earlier, the one with families and labyrinthine ways. If you’ve been to Aleppo you know that sitting down on the grass in a park means making friends with whoever happens to be there next to you. We took a seat somewhere far from groups of young men (gotta be pre-emptive) and close instead to a couple in their fifties, sixties maybe. As it goes, the conversation started. Not any conversation – my friend and I soon were told the most detailed and personal stories about how they were trying to have kids but kept failing over and over. They had grown frustrated and pretty desperate, trying every means possible. In fact, just before coming down to the park they had been to the doctor’s they told us, and started sharing what had been said. Things were going to be fine, there was still hope. But better, given their age, to buy and eat a variety of medicines, all of which were going to help. The woman showed us a plastic bag full with prescriptions and medicine boxes – I don’t know, more than ten in total. Early on in the conversation, the British girl had told them she was a doctor – maybe this is what led to their outspokenness, but now they absolutely wanted her opinion on these medications. She looked in the bag, took out the medicines one by one – all of them had English texts, with signs and letters unknown to this Arabic-speaking couple. She looked at me, then down at the medicine, met their eyes and said that everything would be fine, not to worry. Later, when we walked away, she told me the medicine in the bag, each and every one of them, was for psychological stress and depression – no super medication to cure childlessness as the couple thought. But better not breaking it to them, she thought.

I wonder how they’re all doing today. It’s been I guess three or four years since that meeting in the park, and the same since I last stayed at Qasr Al-Andalus. Maybe they’re still in Aleppo, living day by day. Maybe they’ve fled and now live somewhere in Turkey or Lebanon – who knows, maybe I’ll meet them on the street one of these days. I hope somehow I’ll get to see them again, in that city that’s always bound people together. Actually, given that, I don’t doubt I will. 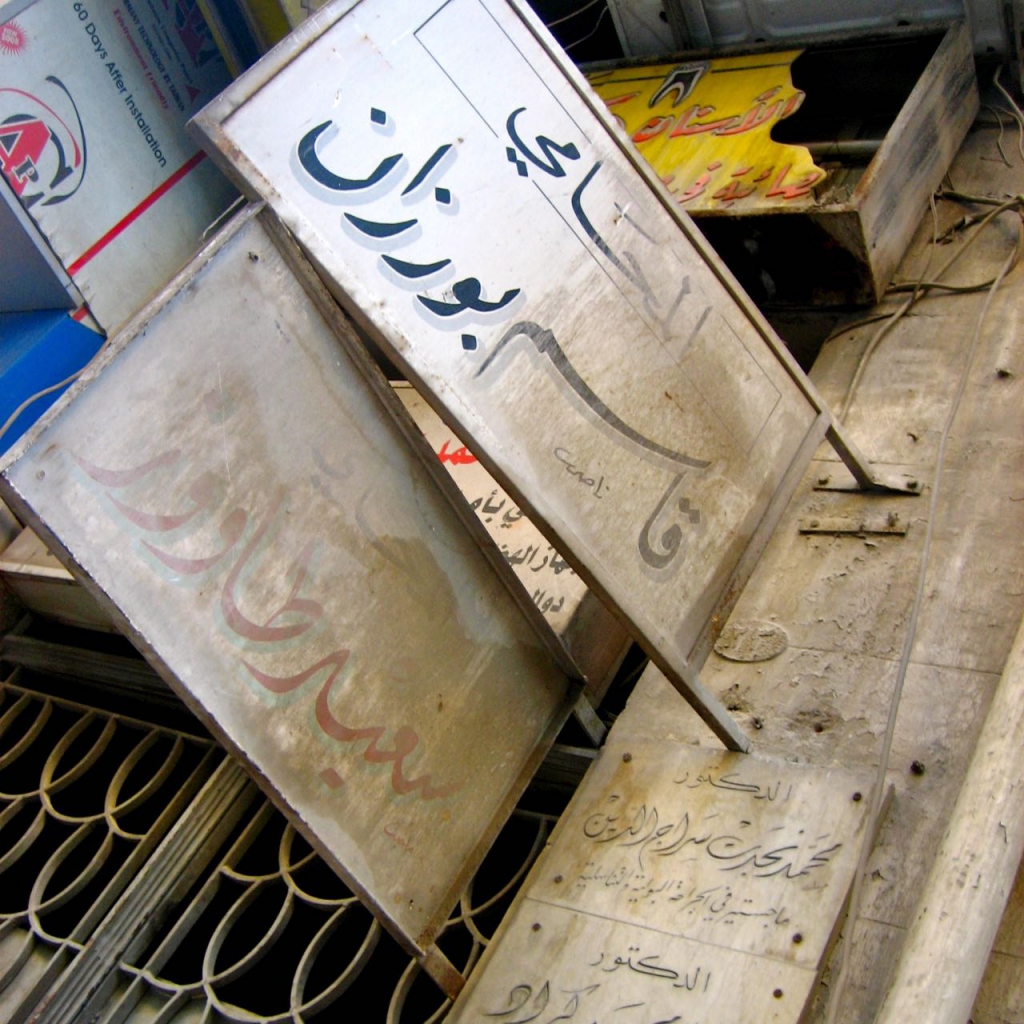 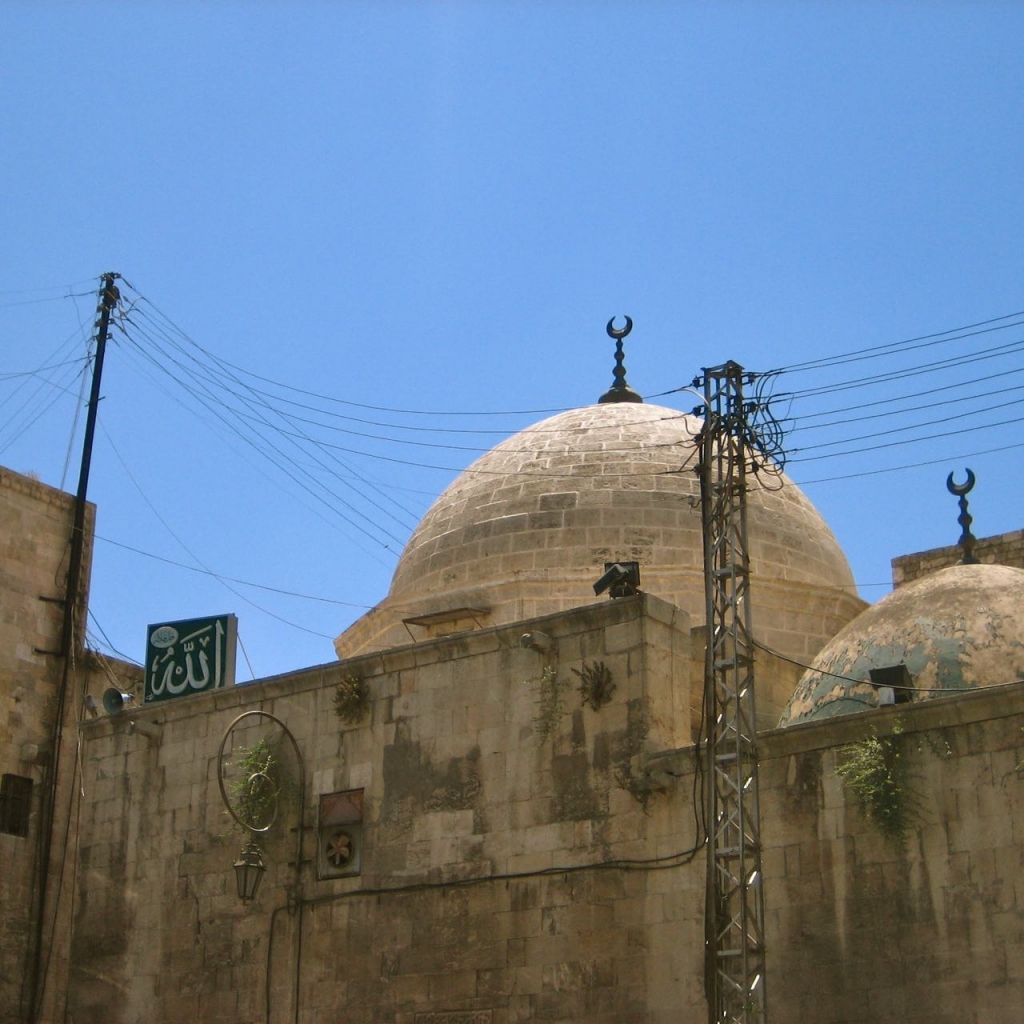