The city and the sea 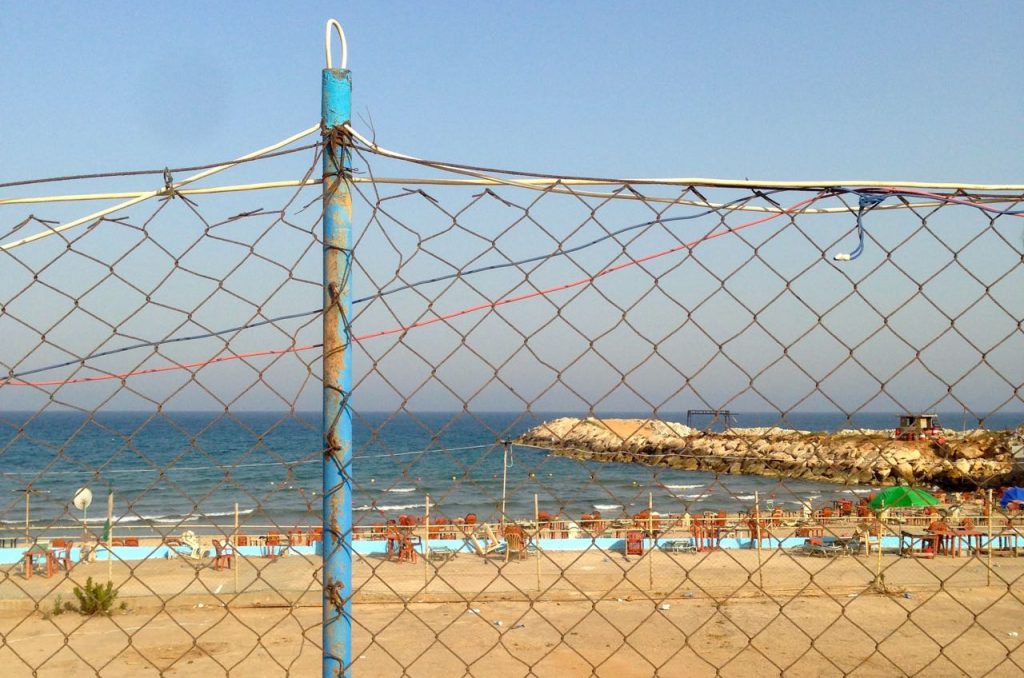 Sometimes you’re reminded how different things look from another perspective.

There’s a small piece of land stretching out into the sea right besides Raouche, Beirut’s big landmark rock that looks like it’s been thrown into the water by giant hands. Dalieh – the land takes its name from 3arishe, a vine or any part of a tree that hangs down, just like this small piece of rocky and overgrown natural hills lead from the city upstairs to where the water begins.

If you’re walking on the corniche that stretches all along the city’s western waterfront, you might not see or take note of Dalieh. From up there, the land seems forgotten or deserted – a piece of untamed wilderness in an urban landscape where every centimetre is either built upon or parked upon or inteded to be built/parked upon.

But if you walk down, you find that Dailieh is different. It’s being used but in a very different way – by families and young couples, kids playing football, teenagers offering rides on horses and even a camel. Fishermen preparing their nets, drinking coffee and smoking cheap cigarettes.

On weekdays Dalieh is calm and quiet. People might stroll down there during the day but it’s mostly the families who live there who frequent the area. In the early evenings people come down and in the mornings too – those who need a dip in the sea before the day begins.

Saturdays and Sundays are busier. This is when the animals are brought down, and when a short lady sets up a small table with chewing gum and cigarettes for sale. When cotton candy in vibrant pink is sold in plastic bags. 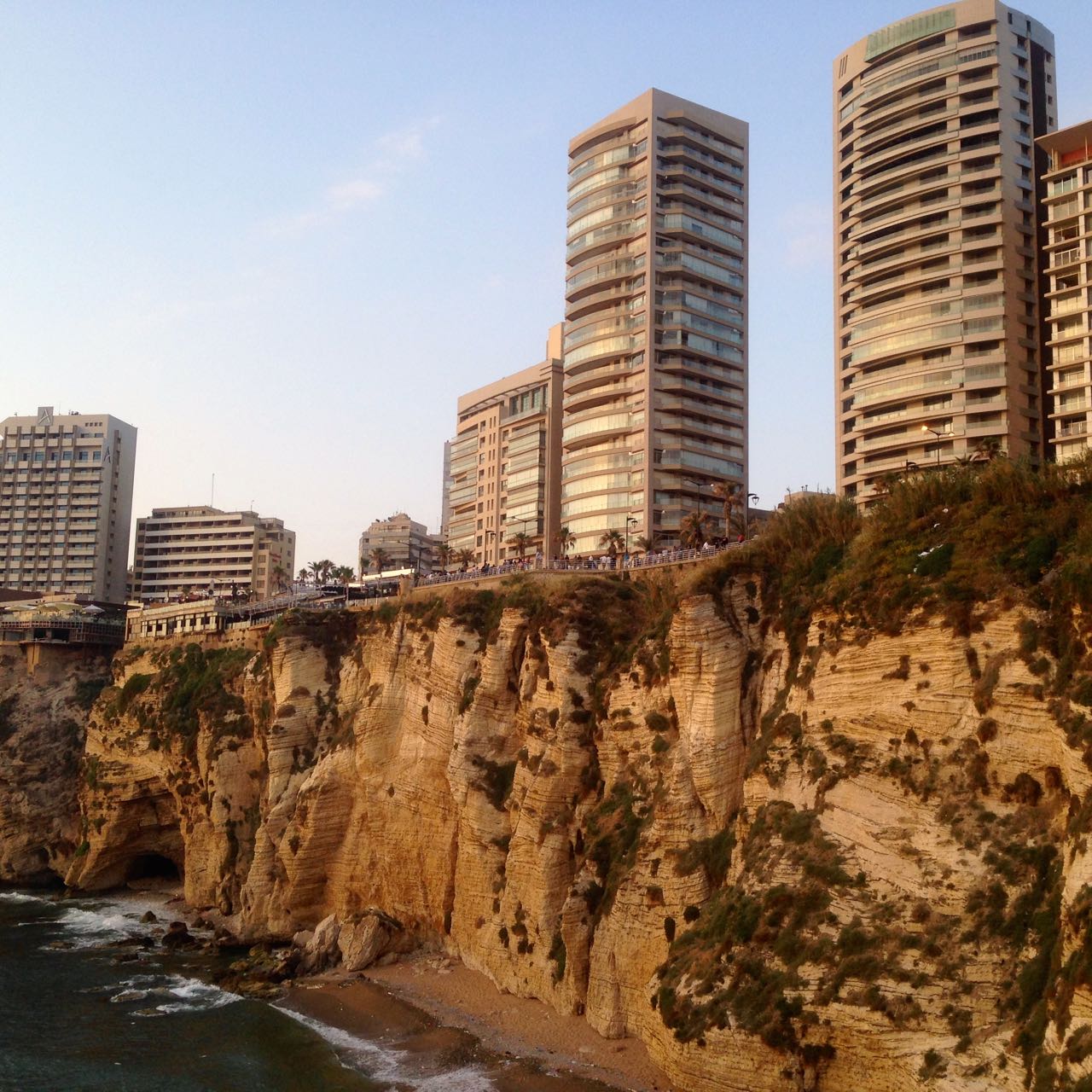 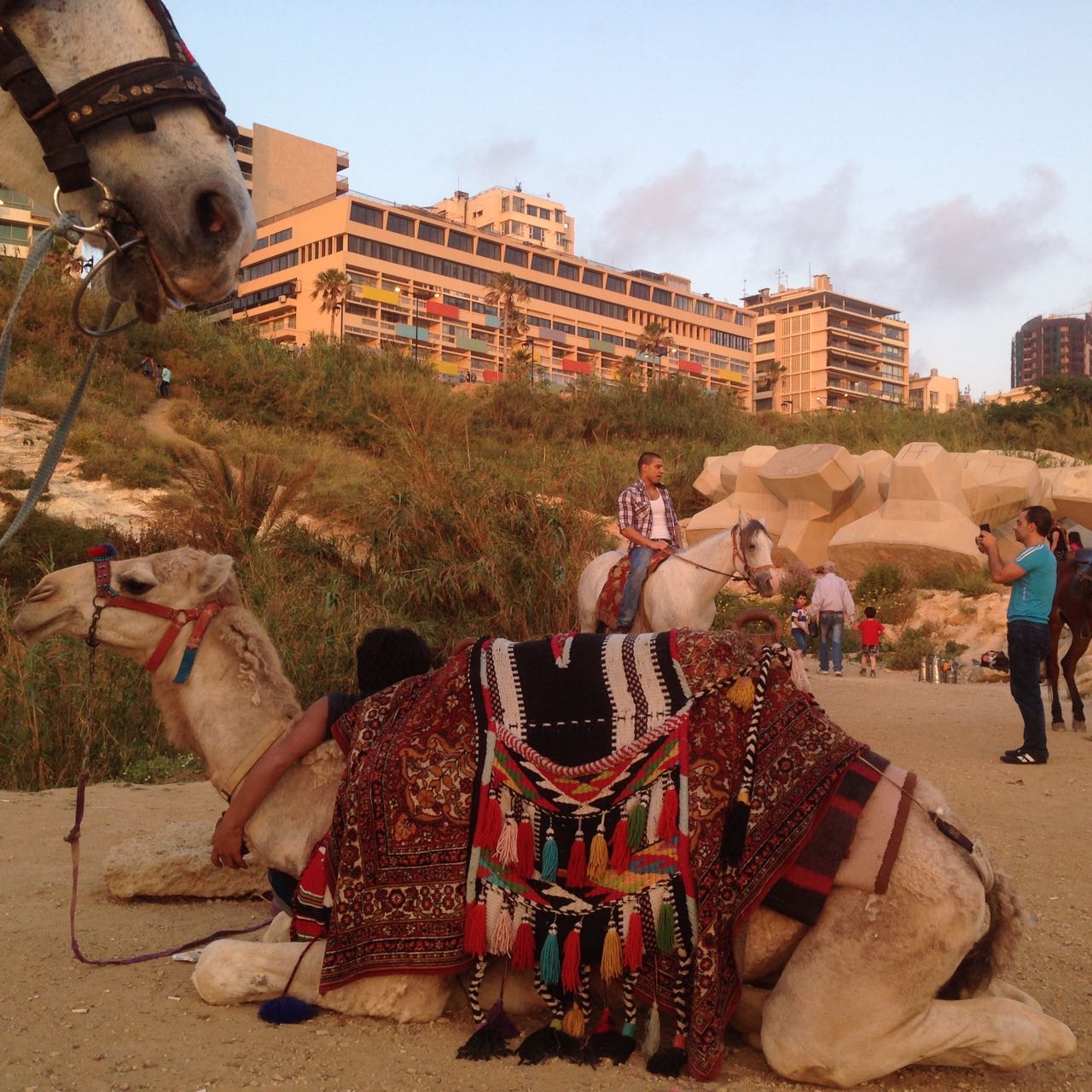 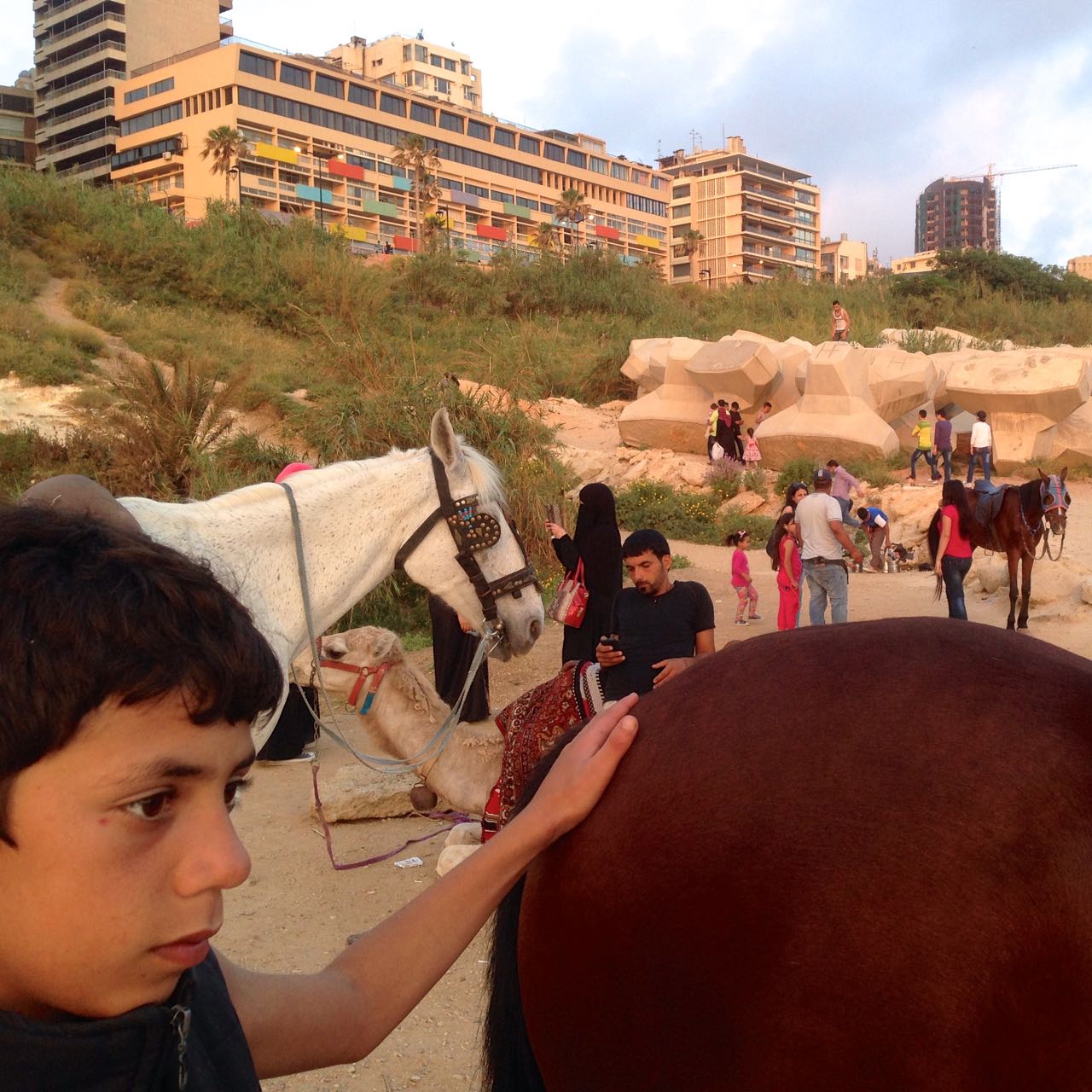 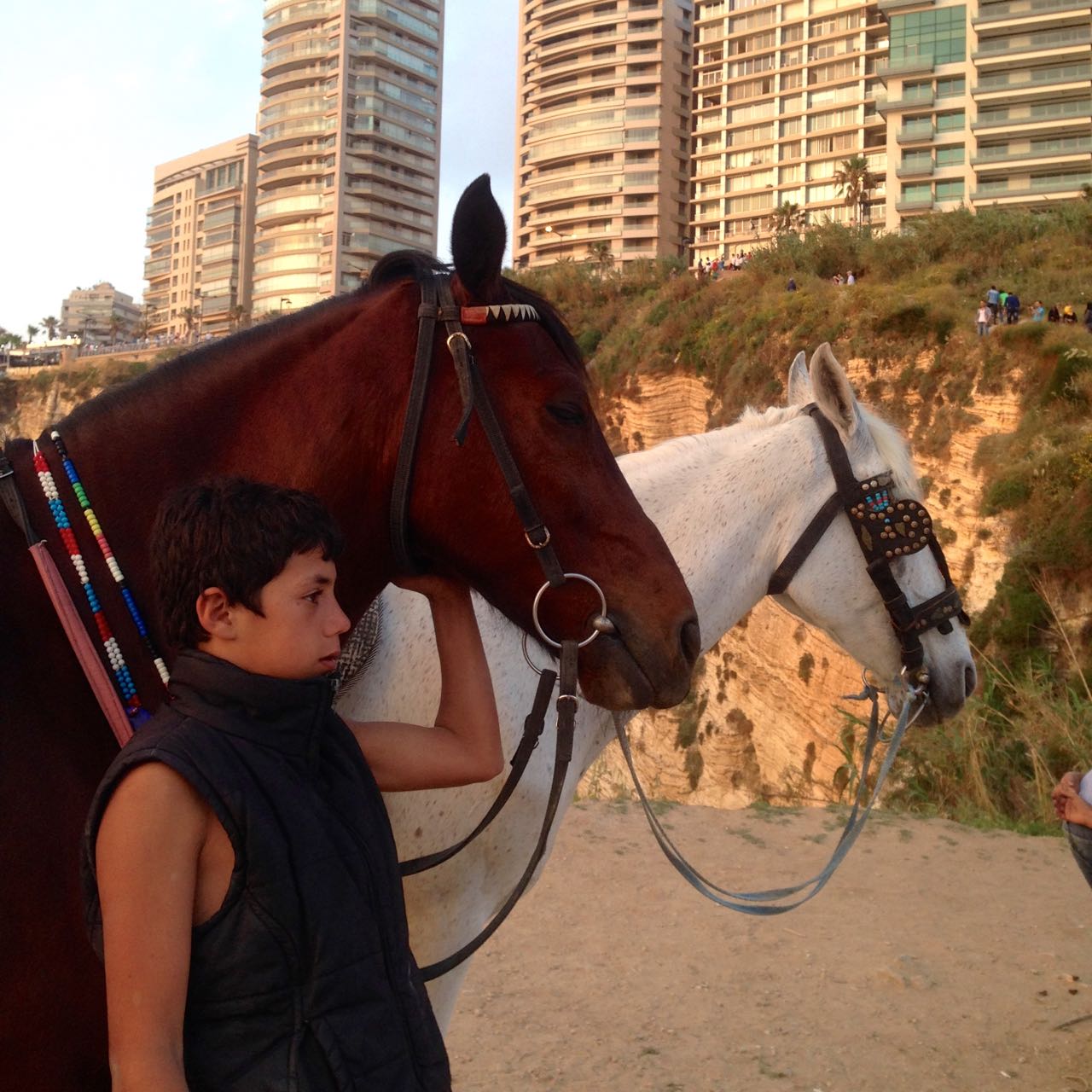 Before, many people in Beirut probably didn’t think much about Dalieh – those who frequent it are not from the same crowds that write articles and run businesses and set the agenda for public debates. Many of them have coffees or meals at seaside restaurants instead, getting their view over the Mediterranean with an attached bill at the end of the visit. Most visitors to Dalieh, those who make use of the space, are people with less purchasing power – and fewer places in the city to go.

But lately, many more have come to know – and talk – about Dalieh.

It was last year that it first appeared. The imposing fence, effectively cutting people off from the wild grass and sloping slopes that until then you could just jump down on over the low metal bars along the corniche.

Dalieh, we suddenly learned, was to meet the same fate as many other parts of Lebanon’s coast: it was going to be developed, built upon, and thereby transfered from the realm of open, shared and public use. It turned out the architect hired to draft a proposal for the project (no one knows exactly what will be built should the plans go ahead, but developers in Beirut have a solid track record of constructing fenced-off, private “beach clubs”, hotels and establishments offering fabricated concepts of being “by the sea”) is the renowned Rem Koolhaas from Holland – the civil campaign launched to protect Dalieh wrote an open letter asking him to consider the value and history of the site, to which he answered briefly in the comments section.

The fence has been up for almost a year now, and the small restaurants that used to serve coffe and tea and late night snacks in its place have been removed. But people are still going down to Dalieh. There’s an opening in the fence, and the steep road leading down to the area is still accessible. People have created art in the fence – figures made from ribbons and thin ropes who try to climb up and get across. 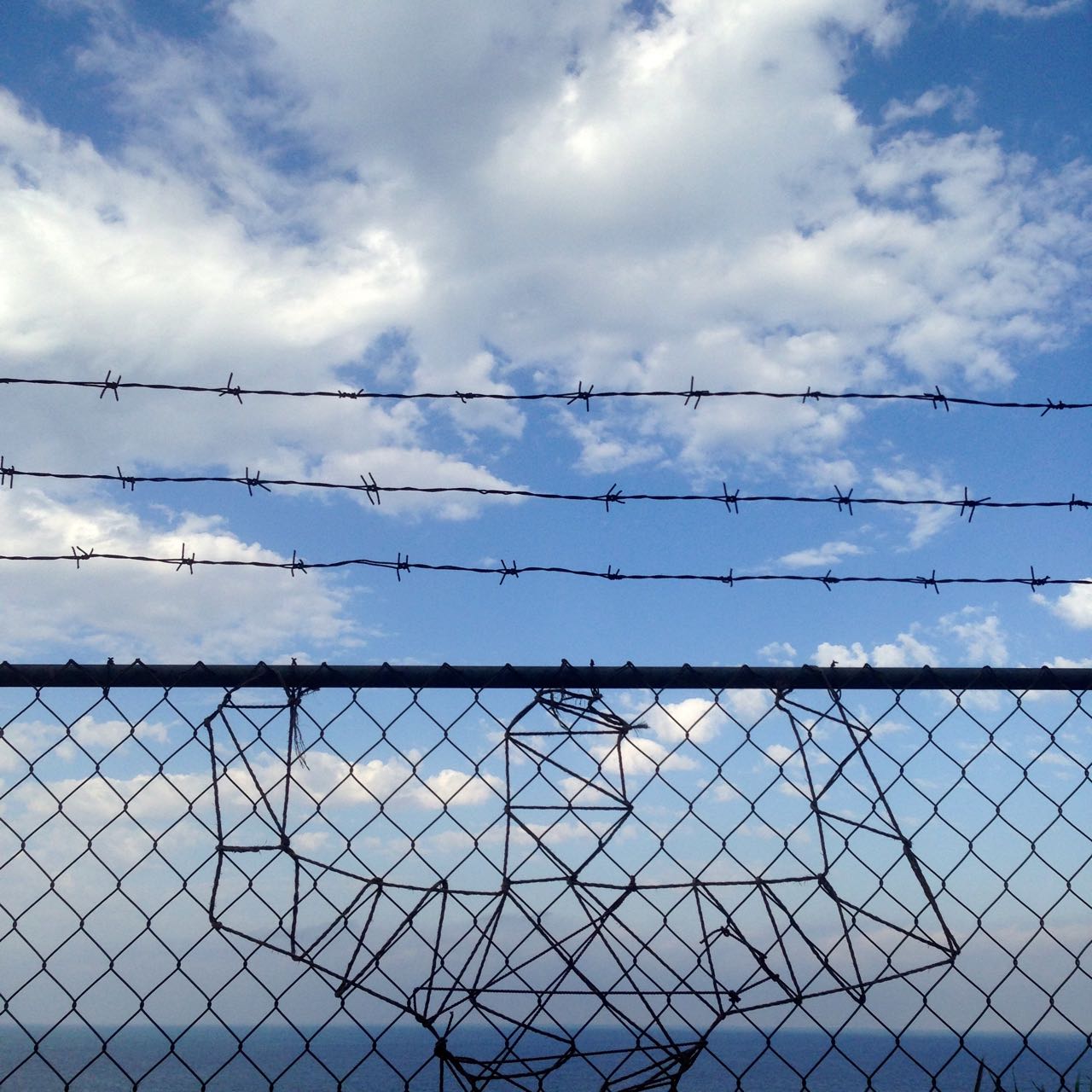 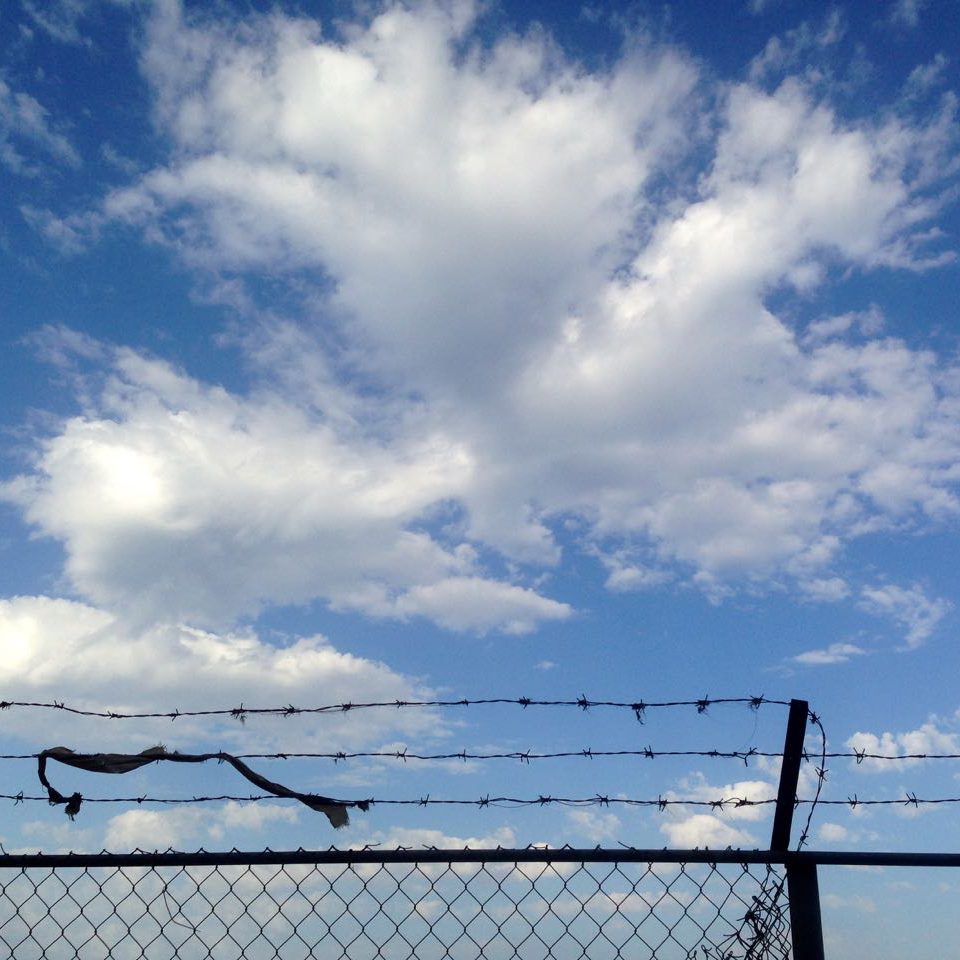 Ali Itani, a fisherman with a navy t-shirt and tanned arms, says that both his father and grandparents were born on the rocks. He lives in a small shed-like house with his wife and kids – or, lived actually. One morning a few weeks ago, the families – there are 14, says Ali Itani – woke up to a mass of police with arms and bulldozers. They came to destroy the houses – the families have for long fought against eviction, claiming they have the right to stay on the land where they have always lived.

“They told us ‘this is our land, you have to leave’. But we said no – you only bought it yesterday.”

Ali continues to talk. About before, when they used to grow tomatoes and potato and aubergine in Dalieh. About his skills as a diver – he once was awarded a trophy by none other than Rafiq el-Hariri after jumping from the Rouche cliff, he says. Now, the main buyers of the very land he’s sitting on is the Hariri family.

Going up and down the coast of Lebanon means traveling with the sea. It is right out there – the familiar and friendly Mediterranean, green and blue and, being a small sea, most days quietly calm. But at the same time it’s far away. Many parts of the coast is treated with no respect – either sewage is pouring out into the sea or bottles have congregated into artifical, plastic dunes. Or, the land is unaccessible. Resorts and private establishments, with names like “Beauville” or “White Beach”, block the view, close people off and ask them to pay a fee in order to reach the water.

In Beirut, Dalieh is one of a few rare spots where you can easily go down to the water. The public beach Ramlat el Baida is another, and – if you jump across and then climb down – the rocks outside the corniche as well. Besides that: hotel complexes, hotel complexes under construction, a commercial marina, a long stretch of overcrowded informal housing reaching down to almost touch the sea and sheltering families who escaped from past conflicts in Lebanon or the ongoing war in Syria. 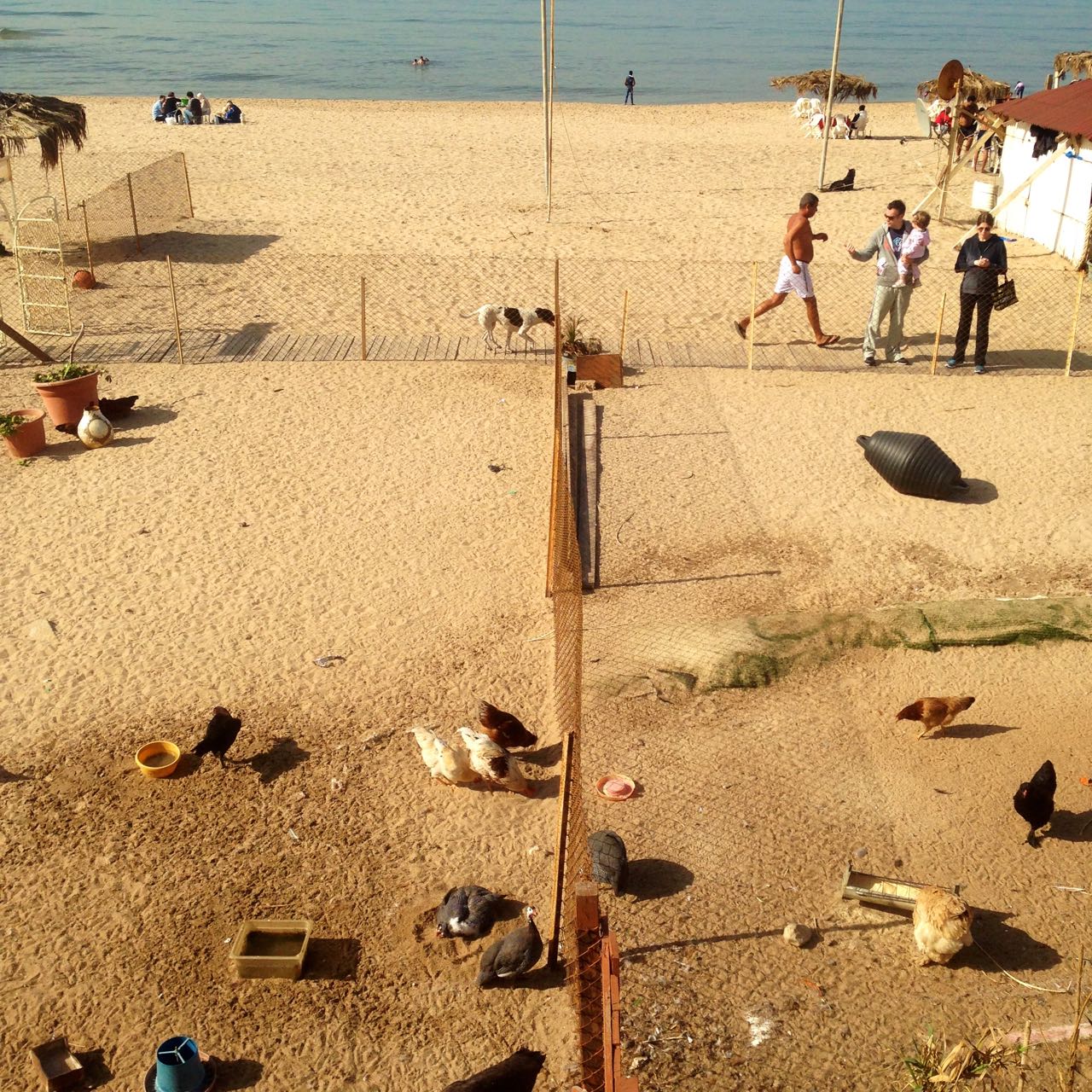 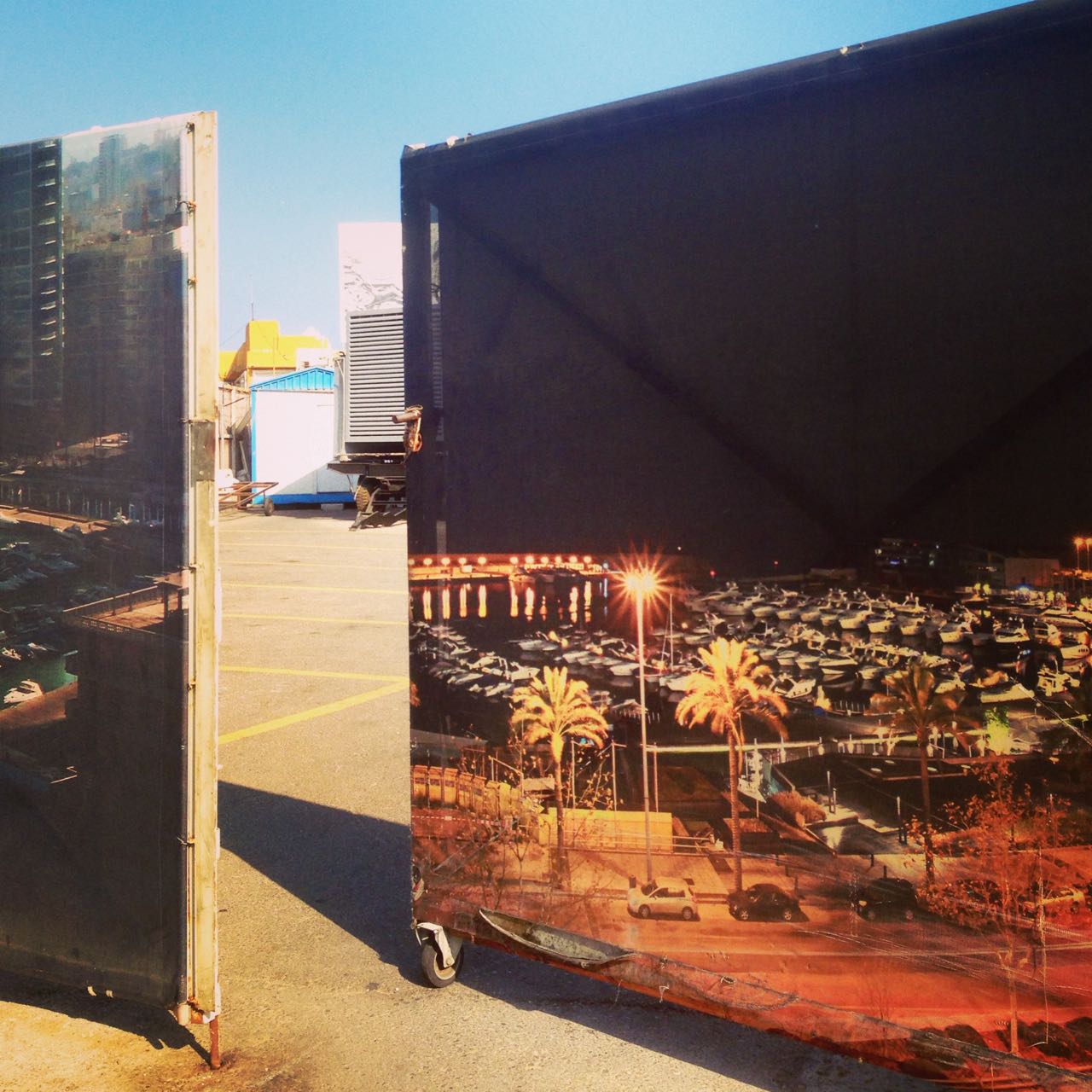 At Ramlat el Baida, Beirut’s only public beach; an advertisement on the corniche.

There’s something else about these fences and cement walls standing in the way between people and the water. Something to do with Beirut as a city and Lebanon as a country and the trajectory from the past. This is a place with deep connections to the sea. All four main cities of Lebanon are port cities, resting their gaze on the horizon – from Tripoli with its markets and diverse urban population in the north to Beirut with its ever-growing sprawl in the middle of the country, then smaller Saida and finally, all the way down south, relaxed and friendly Sour.

My friend Sarah, who is part of the group trying to protect Dalieh in its current form, lives in Ein el Mreisseh, close to where the corniche begins. A lot of hotels stand next to each other down there, and the road that leads next to the car-free corniche is lined on the other side with gigantic, towering highrisers, stretching their shadows all the way down to the water. Urban Beirut literally touches the surface of the sea. Sarah said tourists in the area often ask her, “Where is the sea”. As in, how can we reach the water, how can we get down to it. They see it – the sea is there – yet it’s not. 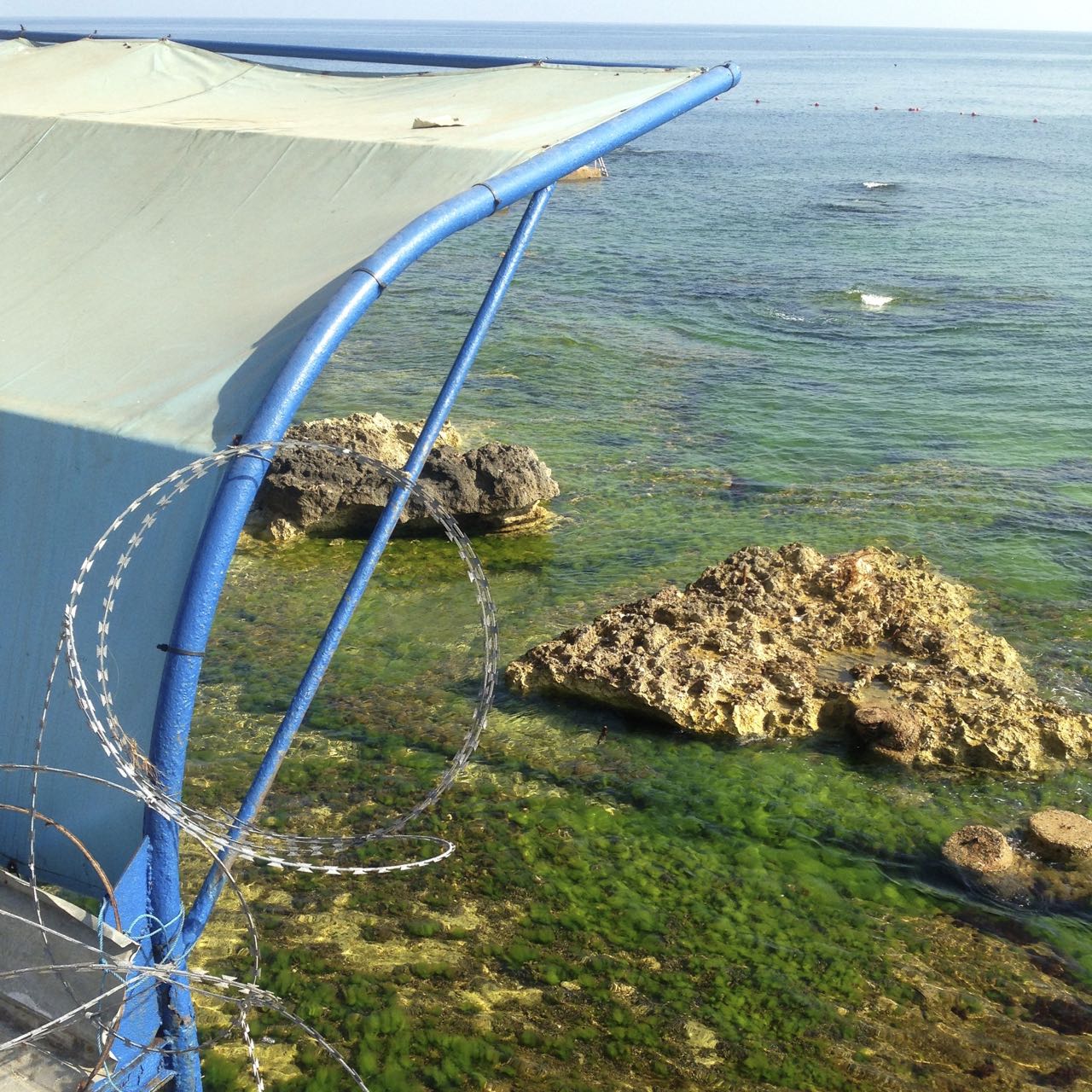 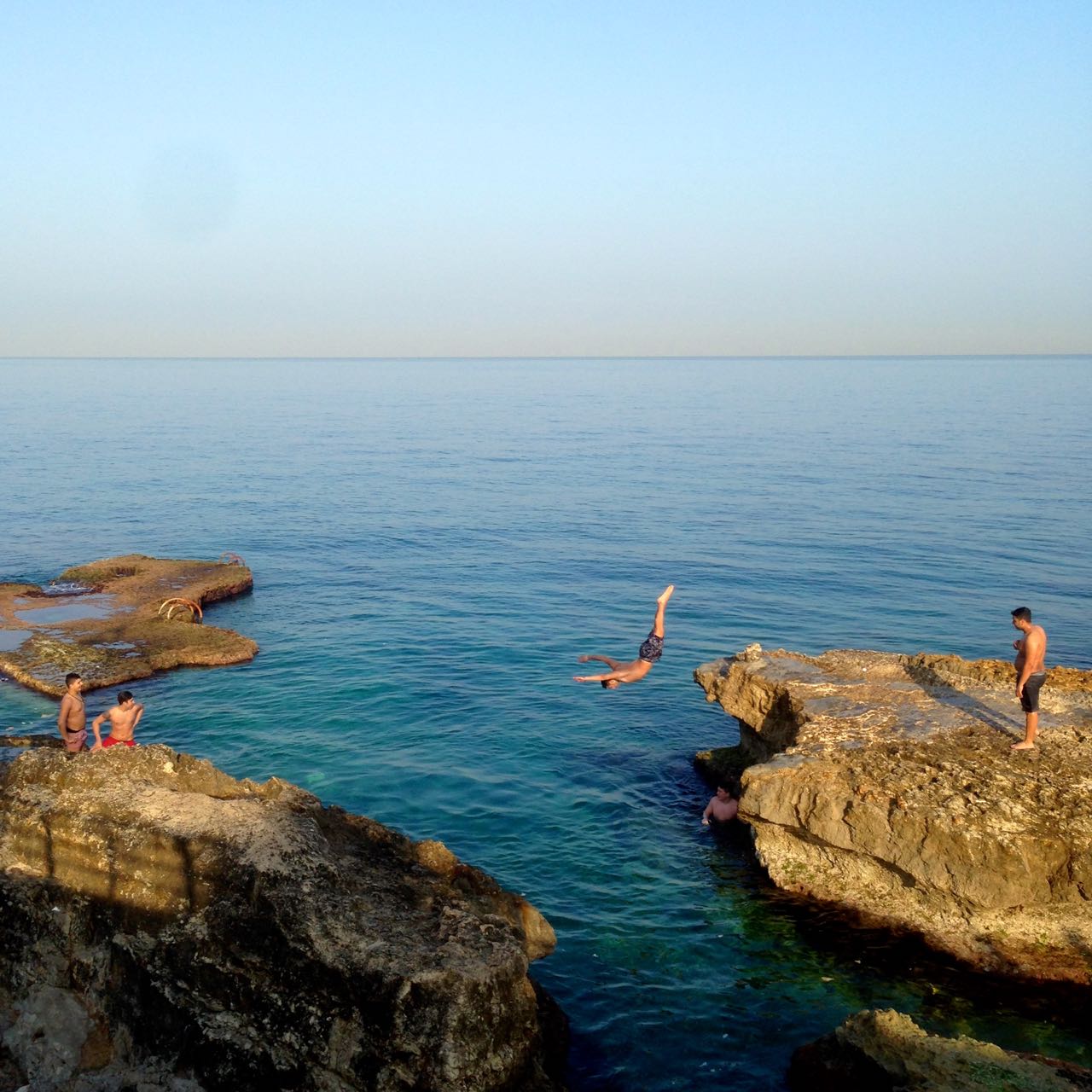