Yussra Ibrahim al-Muhammad stands in her small kitchen taking up 1/3 of the tent where she’s lived for over three years now, in a camp settlement just outside Qabb Elias, a town in the Bekaa Valley. Her kids run in and out of the kitchen: they’re playing outside, hanging upside down in the small tree that grows in front of the tent.

She’s joined by her mother in law, Azra Ali al-Mohammad, a tall lady in her seventies with strong hands and a smile. They show what’s on the shelves – not much besides what Yussra already mentioned: rice and oil and sugar, plus a plate with cooked and mashed eggplant and cucumbers in a box underneath the shelves. Azra points to a few cans with beans. “It’s for Maha,” she says – Maha is one of the kids, five years old and with a cancer diagnose from when they still lived in Syria. She goes with Azra to a hospital in Beirut now for treatment, every two weeks. But it’s costly. Most good health care in Lebanon is private and expensive, different from pre-war Syria where hospitals (although standards were often basic) were free or inexpensive.

For refugee families, including those without children with serious medical conditions, expenses seem to be growing more and more overwhelming. The small minority of families who had a little bit of money upon arrival, and now rent apartments in Beirut and other cities, are quickly seeing their savings disappear. Others, the big majority of the 1.2-1.5 million Syrians who have fled to Lebanon, are fighting every day to get by.

We did a long report about this recently, for Fokus in Sweden, a weekly magazine on politics and current news. You need to buy the issue to read it (and see Karim‘s beautiful photos), or subscribe to access it online. The short introduction is here.

The stories come from Yussra and her family, and their neighbours in the camp. Most of the families know each other from back home in Syria; they were neighbours already back then, in a small town outside of Aleppo. This is the case with most camp settlements in Lebanon today: they are a kind of makeshift mirrors of neighbourhoods or villages in Syria, whose residents have fled and made new homes together.

For many parents, the days have grown more and more similar. The pattern is very much the same: cleaning, washing clothes in buckets of water, taking care – in a shared, communal way – of the kids. Then, either in the morning or after lunch, work at one of the fields surrounding the camp. The entire Bekaa is like one big patchwork of fields and plantations, shifting in shades of green and brown and gold and sepia. Syrians have for long worked in Lebanon; in fact, the country depends entirely on Syrian man/womenpower for several sectors, including agriculture and construction. Even before the war, perhaps as many as 1/2 million Syrians resided temporarily in Lebanon, and travelled back and forth during busy and quiet periods of work.

The difference now: there’s no going back. Azra, the grandmother, sits outside the tent of one of the neighbours. She holds a small cup of tea in her hand, rests her gaze on the horizon where the mountains separating Lebanon and Syria meet the sky. She’s just come back from a morning shift on the fields: there’s grass and leaves sticking out from her socks.

Yussra is going out in the afternoon, together with a group of other girls and women from the camp. A white truck stops just outside, waits for them to climb up in the back. They’re going to a field 10 minutes away to pick loubieh, haricots verts.

“We will stay until six-seven. In different fields every day, depending on the season. Cabbage, peaches, zucchini, aubergine.”

The young man in the truck drives away; we follow him on the dusty road, lined on both sides with greenery. All kinds of vegetables grow there – apart from what Yussra mentioned, things like sweet corn, potatoes, cauliflower, grapes and olives. Tobacco, in never-ending rows. And another smokeable plant: the unmistakable cannabis sattiva, very happy in the dry and hot Bekaa soil. We did a few stories about the cannabis growers in the Bekaa back in 2013/2014, including this for Norway’s Aftenposten Innsikt and this for The Caravan in India. The issue, in short: Lebanon has a very lucrative hashish production and holds a top-5 position on the list of global producers; growers are mostly left on their own by the police, except for times of relative calm and when the state decides it needs to look good and makes a raid or two. At the moment, with the entire security crisis and the nearby war in Syria, no one has time to care about a minor thing like cannabis growing. If you drive around the Bekaa these days, you can impossibly miss that: the valley this summer is full of fields where what used to be potatoes is now something much more lucrative (and much more sweet and smelling). 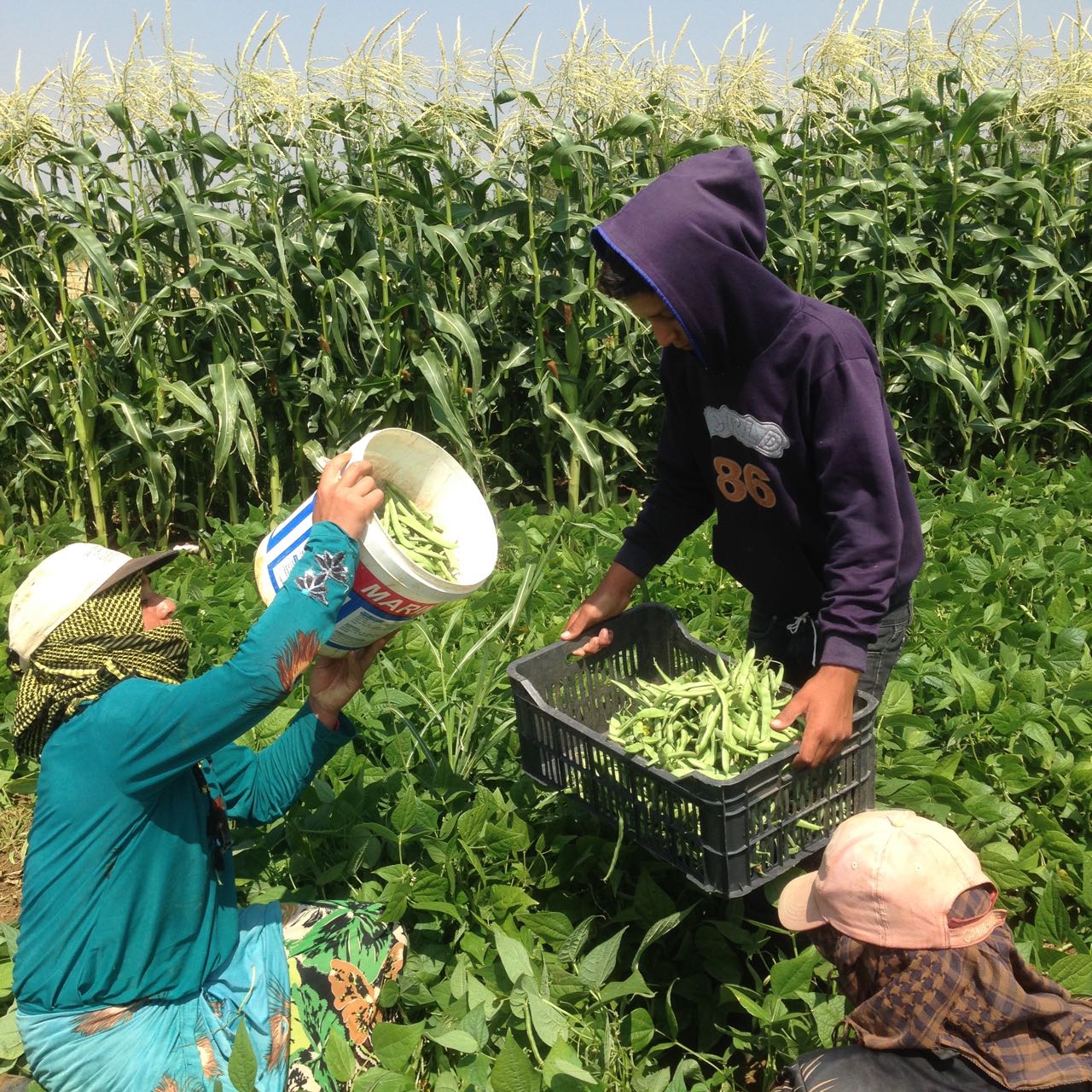 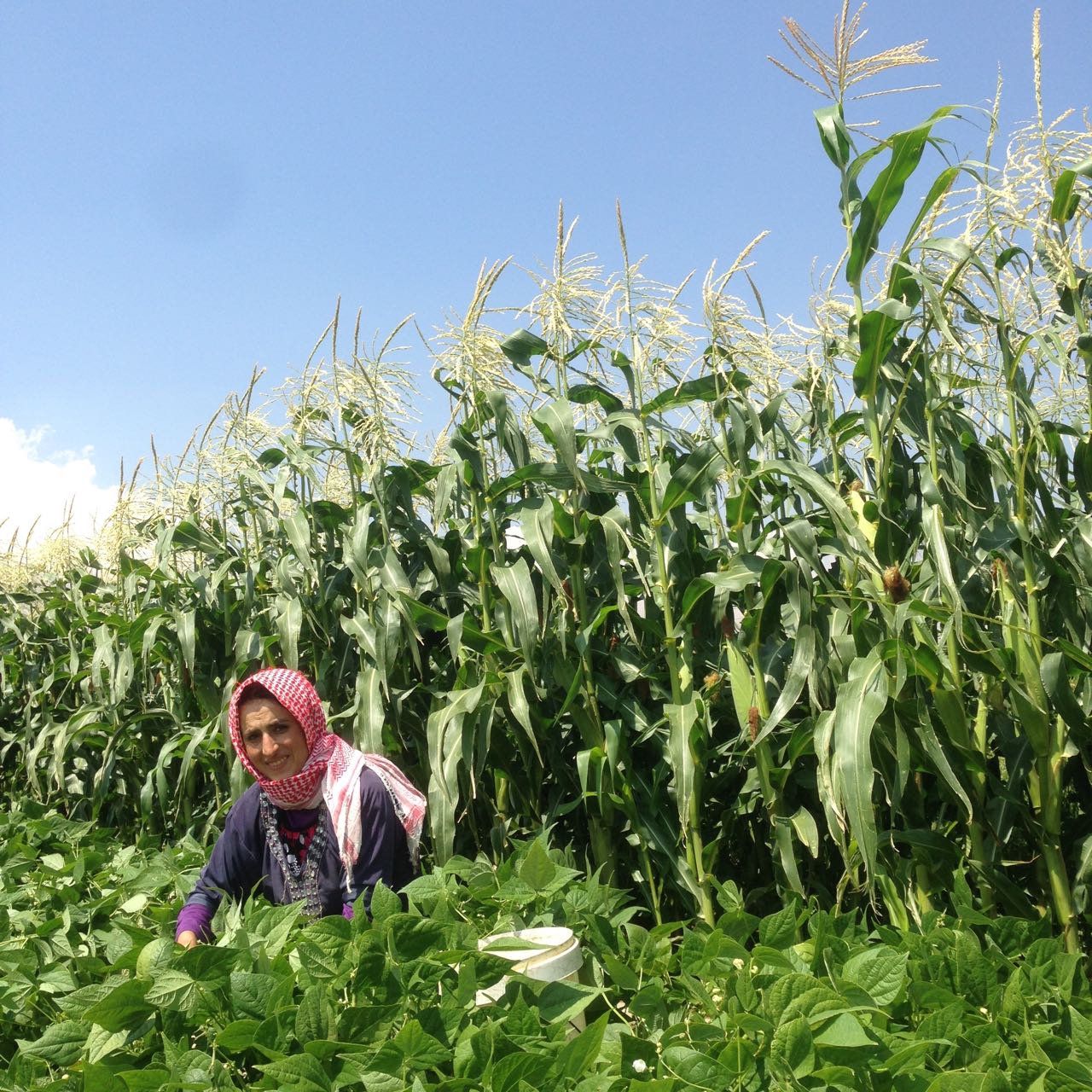 Yussra Ibrahim al-Mohammad, working with picking haricots verts. A young boy from the family that owns the land carries away the harvested vegetables.

For the workers, picking one thing is not so much different from picking another. Yussra and her neighbours though, still work with harvesting things that will be sold in Lebanon’s vegetable markets. They earn maybe 10-15 000 lira, which is 7-10 dollars. Khadidja, 12 years old and the oldest daughter in the family just next door to Yussra, wears a red sweatshirt with a silver heart on the back. The tiny look-alike diamonds glimmer in the sun. Yussra takes her hands, shows their hardened skin.

“These hands should hold a pen, not work on the fields.”

An hour’s drive away, just outside the city of Baalbek in another part of the Bekaa, a big twice-weekly market is full with people. Each Wednesday and Saturday, “the people’s market” brings vendors and shoppers from all over the surrounding area. Grapes and nectarines sell for 1500 lira (1 dollar) per kilo; apples and peaches for less. Plastic toys, things for the kitchen, towels and appliances and tools – everything offered in piles on foldable wooden tables.

Khalaf, seated on the back of a pickup, sells bags with potatoes and onions for 2 dollars each. His customers these days, he says, are mostly Syrian like himself. The market is cheaper than most other places. A woman walks past with a babystroller filled with plastic bags. There are radishes, a bag with soft peaches, tomatoes and salad. She’s from Yarmouk, the big Palestinian camp in Damascus. She doesn’t want to be in a picture, she says, but asks: “Sweden? Please, how can I go there? I have nothing here, I’m Palestinian. We live just over there, in a small place, more like a garage. I go here to get cheap vegetables, that’s the only way. These I got for free when I told the man who sold them I have no money.” 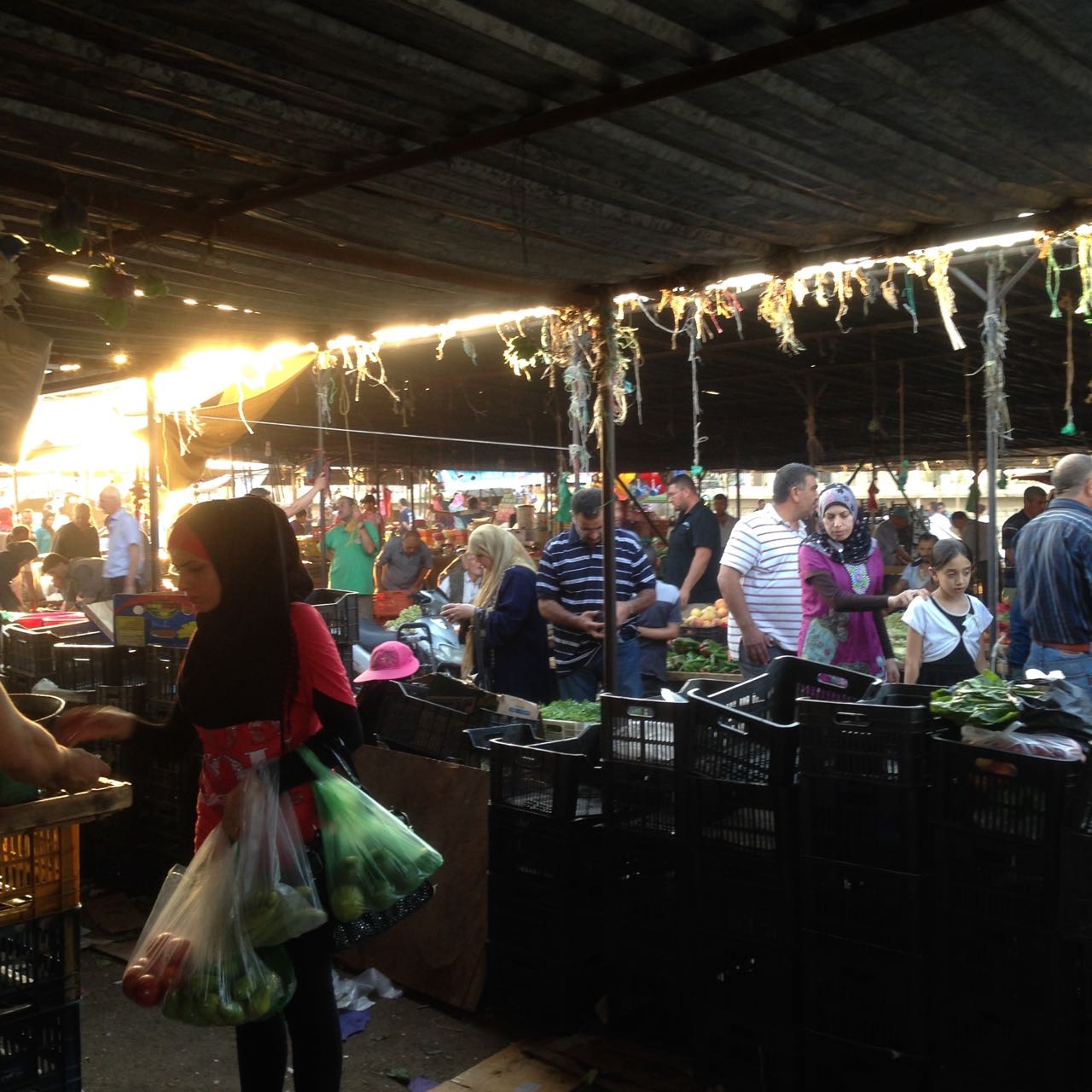 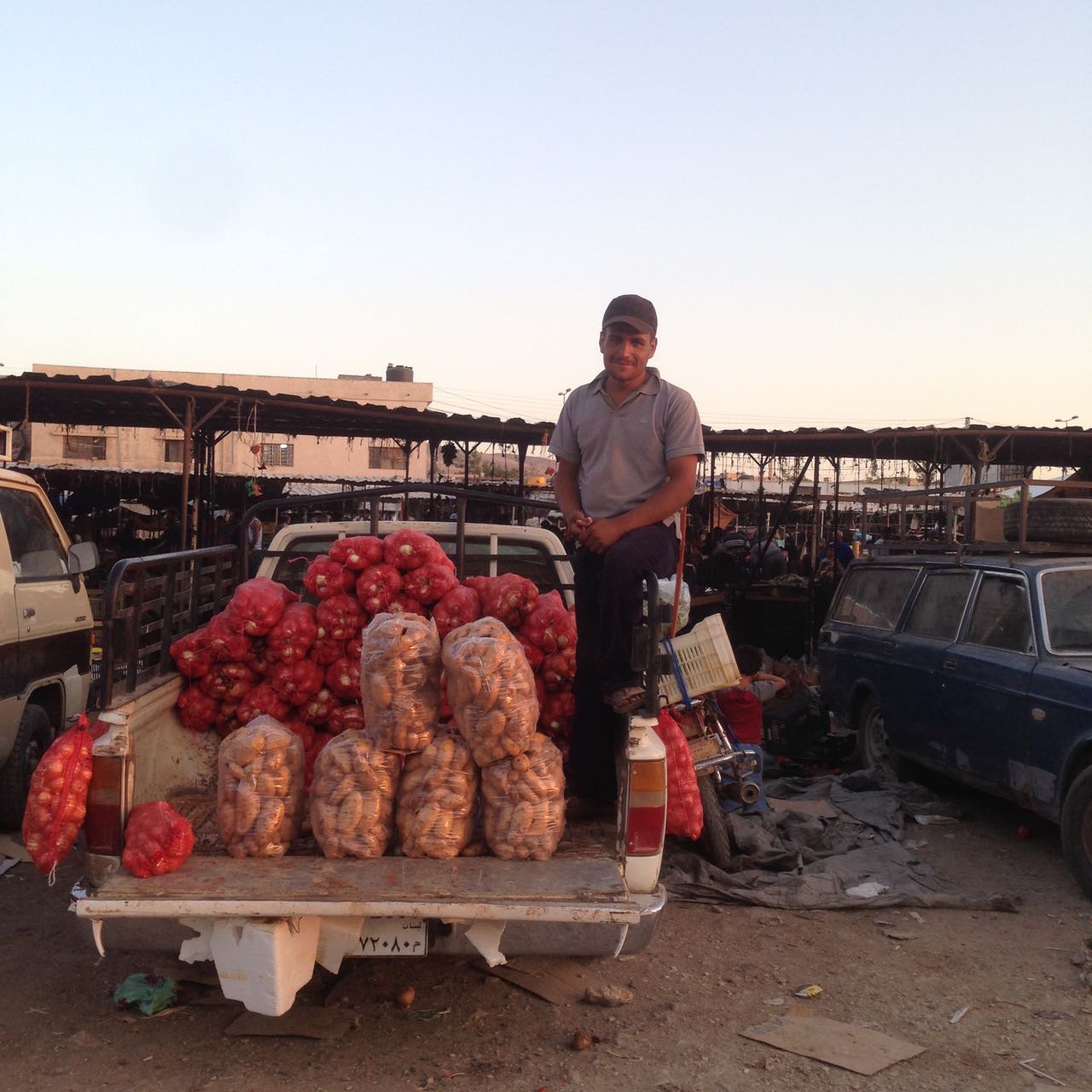 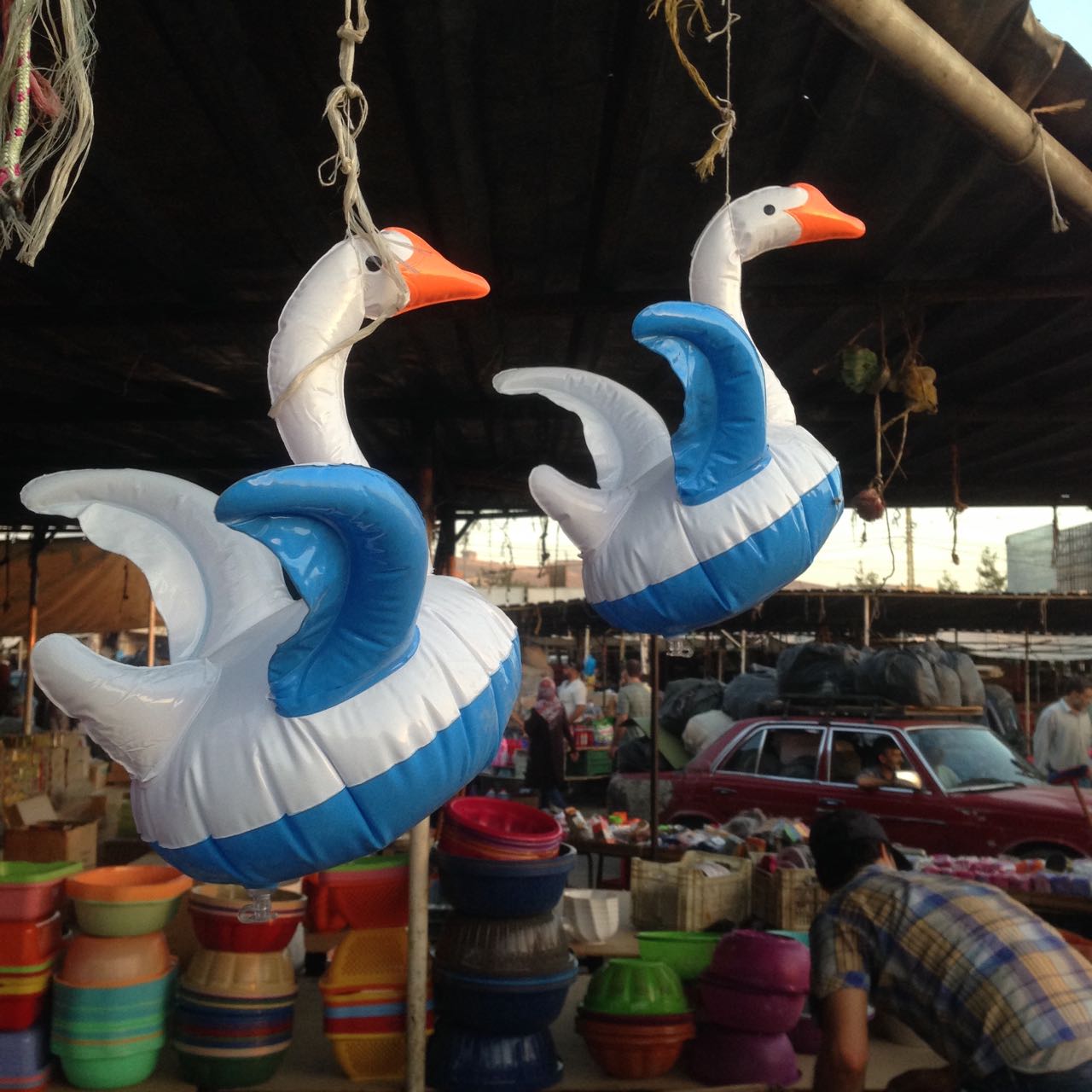 About 50% of customers today are Syrian, said the market vendors. Khalaf from Syria sells onions and potatoes at the market.

Money. The story for Fokus, about Yussra and her family and neighbours, was in every way about that. A few weeks ago, UN’s World Food Programme (WFP) announced that they would start giving Syrian refugees in Lebanon and Jordan 13.5 dollars each month, a cut in half from the 27 dollars they had received earlier. 27 dollars in a country like Lebanon, where prices are similar to or higher than those in southern and central European countries, is very little. Yet, it’s the sum calculated to cover the most basic nutritial needs of a person each month. Now, millions of Syrians receive only half of that amount.

The reason is something affecting not only Syrians but other refugee communities too – South Sudanese in Sudan, Ethiopians in Kenya, Yemenis and Iraqis displaced in their own countries. The UN and other agencies are going through a huge and serious financial crisis, where global needs far exceed incoming donations and contributions. Have talked to great people about this – Joelle Eid from WFP, Michel Gabaudan from Refugees International – and their explanation is very straightforward. We’re going through a period of time when a very big number of people, more than since the end of WWII, have been forced away from their homes. The conflicts in CAR, South Sudan, Yemen, Iraq and Syria; the Ebola crisis in Western Africa. The earthquake in Nepal. Emergencies are so many and so serious, and all happening at the same time, that funds are nowhere near enough.

In the light of this, seeing the debate in Europe (at least on social media and among generous communities and groups of people, many publishers and sensible commentators and politicians) take a new turn after that photo of 3-year-old Aylan Kurdi is I suppose a step in some kind of right direction. What we still haven’t seen though, is a real move towards the kind of major re-thinking that really needs to happen, where responsibility is taken for not only the safety of refugees but also the causes behind today’s conflicts and global socio-economic inequalities.

Awaiting that, there are some really interesting statistics I came across while looking into all of this lately. Oxfam did what they call a Fair share analysis back in spring, where they look at how much wealthy countries are contributing in relief to the Syrian crisis in relation to GDP. There’s also the Global Humanitarian Assistance Report for 2015, which is an informative source of information and statistics, and the UN Financial Tracking Service, where you can follow what’s happening to the global aid money. 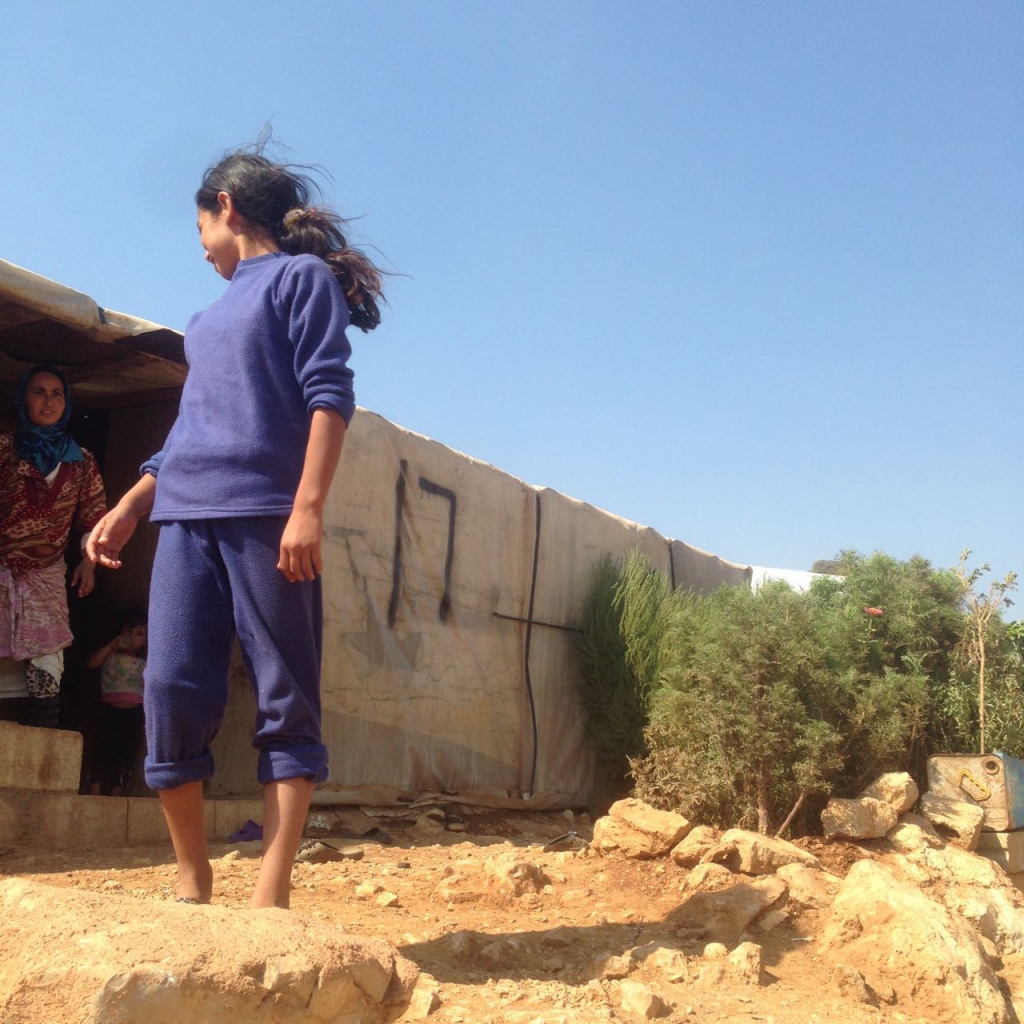