That’s the name of a restaurant serving funked-up traditional Bengali food – but also an expression can signify most of one’s feelings towards this city. Calcutta is a place for those who like to travel in time (any city is of course, but some more than others): it began its journey as a small village, got rapidly occupied and made into the first proper city in the British colonial empire in India, then lived through years of struggle and development and then handed over the role of Indian capital to Delhi a little more than 100 years ago.

Today, after having seen both the proud Indian independence and several tragic partitions and population movements in the Bengal, Calcutta rests assured on the banks of the Hoogly, stretching its limbs in all directions. It’s not the centre of power anymore (that’s Delhi), and not the place to do business (Bombay, of course), but it remains a place with deep, nostalgic roots. It’s been talked about, of course, in derogatory terms – they have called the city sad and smelly, doomed its existence and wished to never return. Seen it as a home for slumdogs, forever having lost its once majestical air.

But those people cannot have seen the thousandfold shades of pastel on its house facades. Cannot have tasted its food on the streets; its pieces of papaya served on coarse banana leaves. They must’ve missed to stop at its teastalls, sat down on its benches of softened wood. Talked to its residents, listened to their stories. Met the people who have migrated to the city: first the Chinese and Armenians and rural Bengalis – the Jews from Baghdad, even! Then, continuing today, families and young people from U.P. and Bihar and Orissa: nearby Indian states, where (as the story goes) jobs are few and wages are low, driving people to pack their bags and migrate elsewhere – to the city, in this case Calcutta, where they will join millions of others, already working away in its streets-shops-stalls-markets-sidewalks-workshops-units-garages-parks-plants-ateliers. 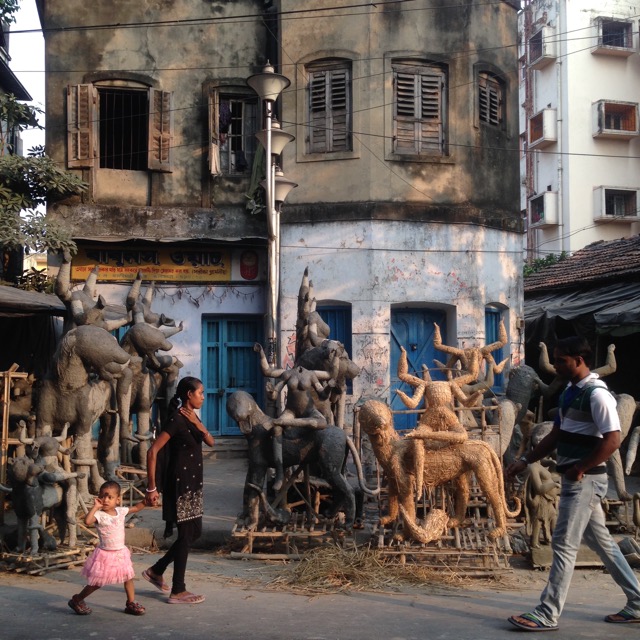 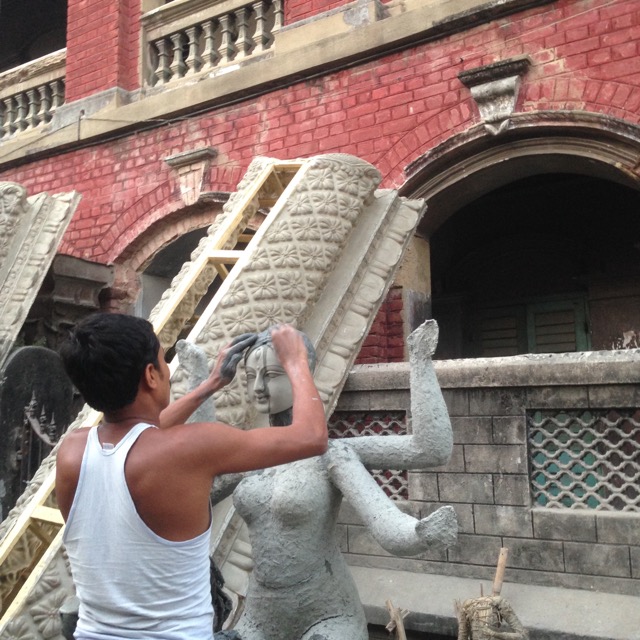 This time visiting Calcutta was right at the busiest time of the year, when one festival begins almost before the previous one is over. Durga puja, Kali puja, Diwali, Jagadhatri puja – all celebrating the spiritual and the divine; all transforming the city to a place of colour and light. Leading up to these events, Calcutta’s craftspeople make large idols to be placed in streetcorners and courtyards all across the city. 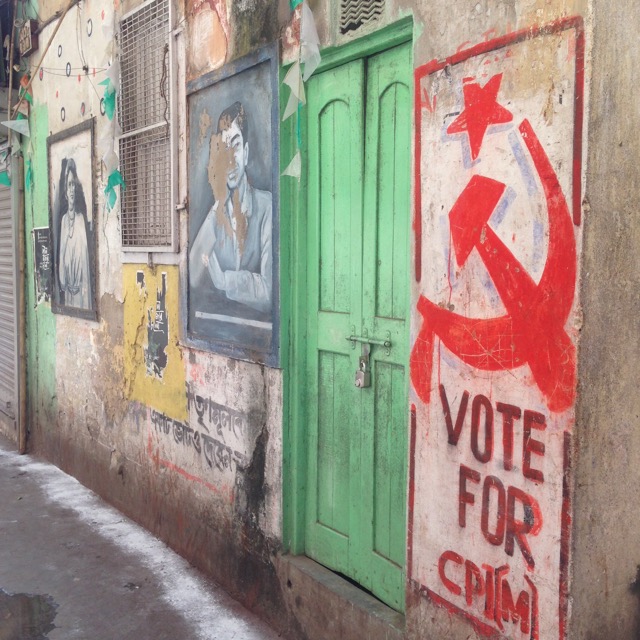 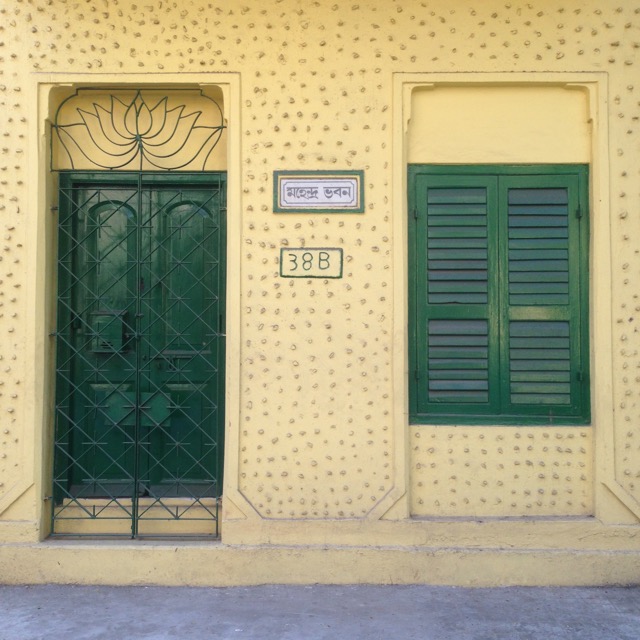 They say Calcutta has always been a leftist city – journalists and writers here are inspired by Marxist writings; the traditional jatra theatre has always been used for messages of solidarity; and the state of West Bengal was run from 1977 to 2011 by the communist-led Left Front, making them the longest-serving democratically elected communists government in any part of the world. Nowadays, the hammer and sickle on Calcutta’s walls are being slowly painted over – the current chief minister Mamata Banerjee has (symbolically) decided to paint the entire city (so it seems!) in blue and white. 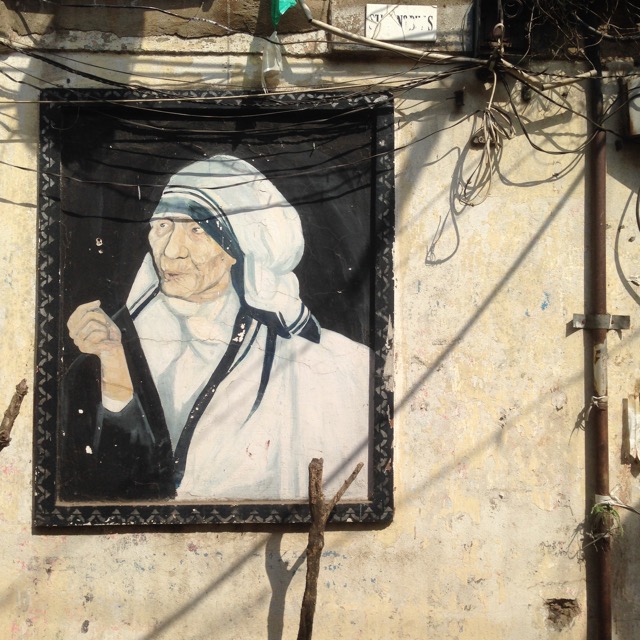 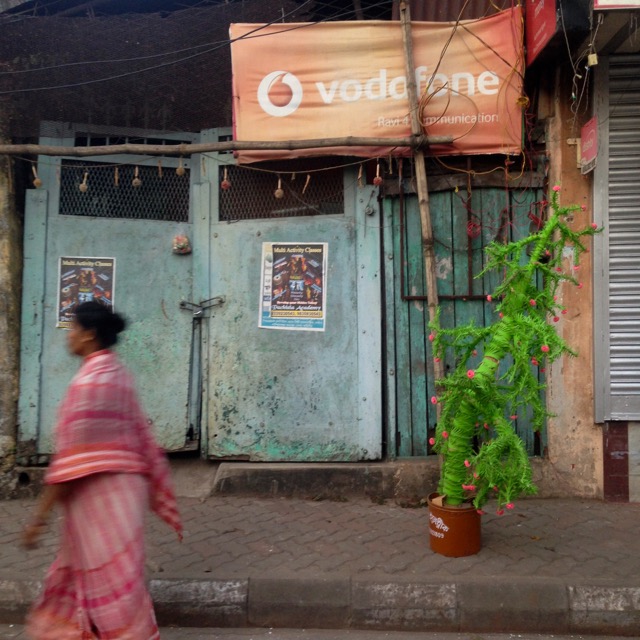 Perhaps the foremost icon of Calcutta, mother Teresa, portrayed on a wall in the city; on a pavement, Christmas decorations. 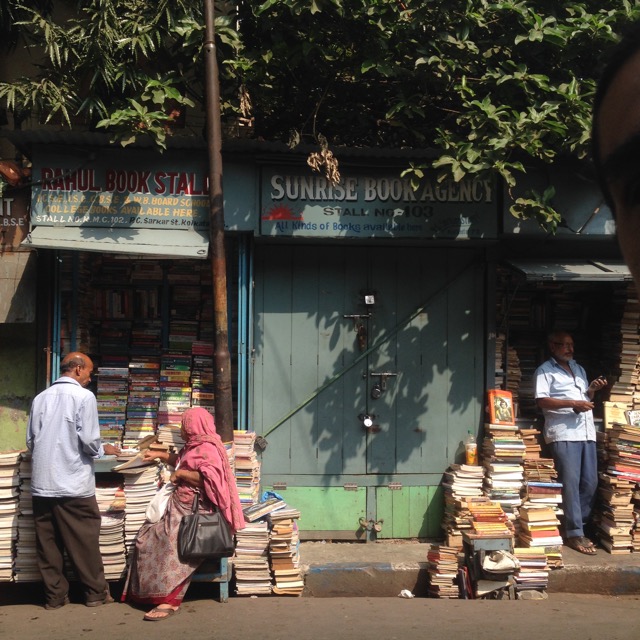 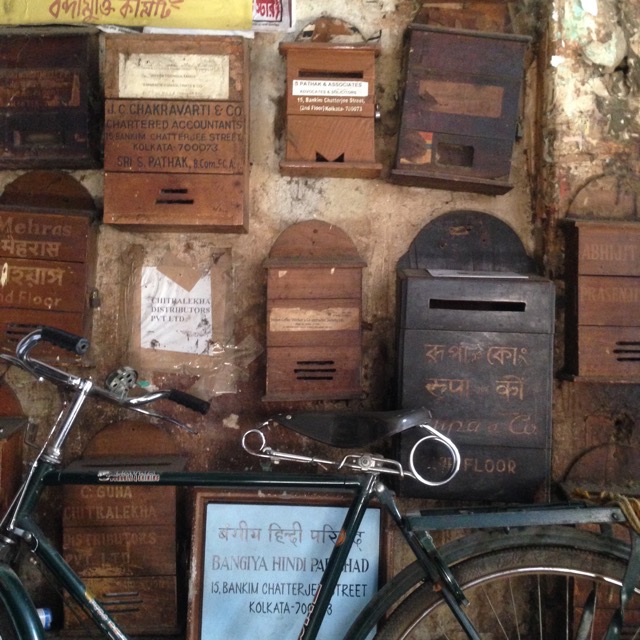 A woman shopping for books at the iconic College Street, Calcutta’s outdoors book districts, where the streets are lined with neverending small book stalls and publishing offices. Inside an old building just off the street, the Indian Coffee House has gathered writers, intellectuals and old friends for decades. 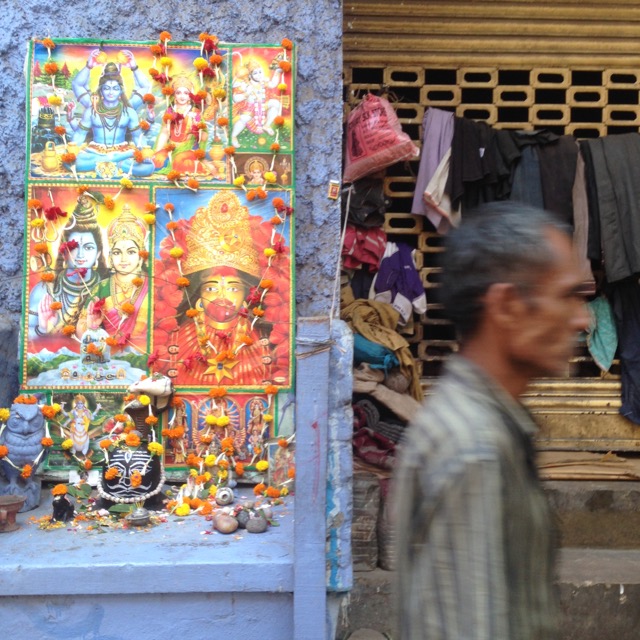 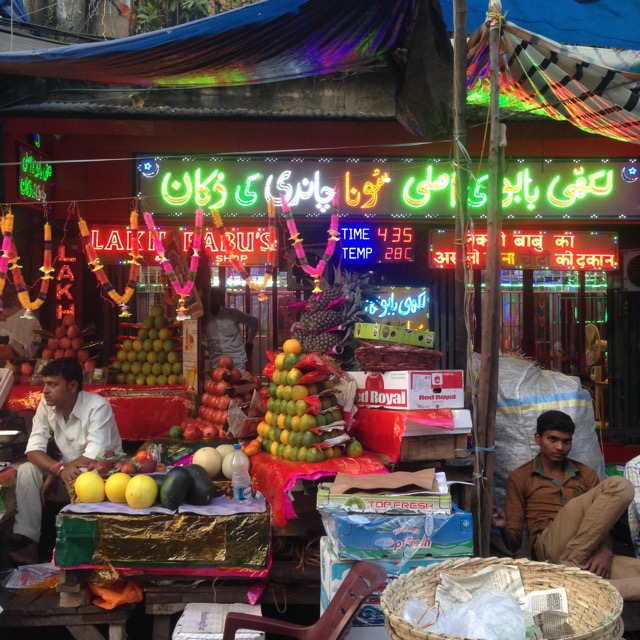 When the streets are more than streets – homes, houses, shared places, sacred places – and have signs in several languages. 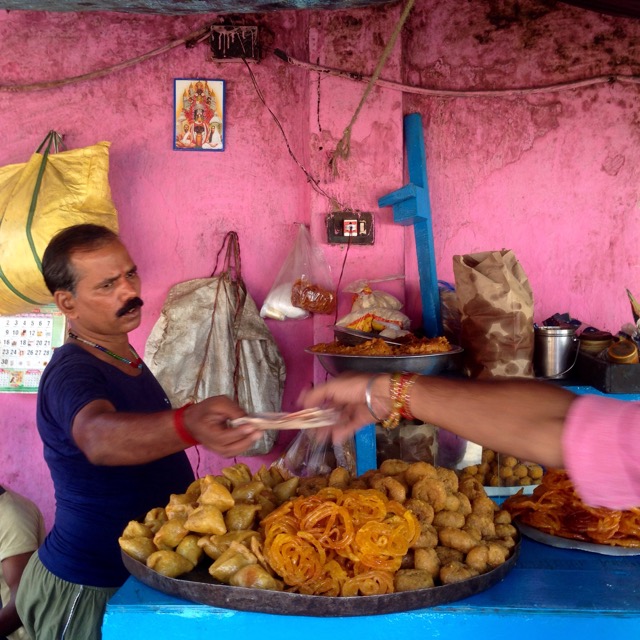 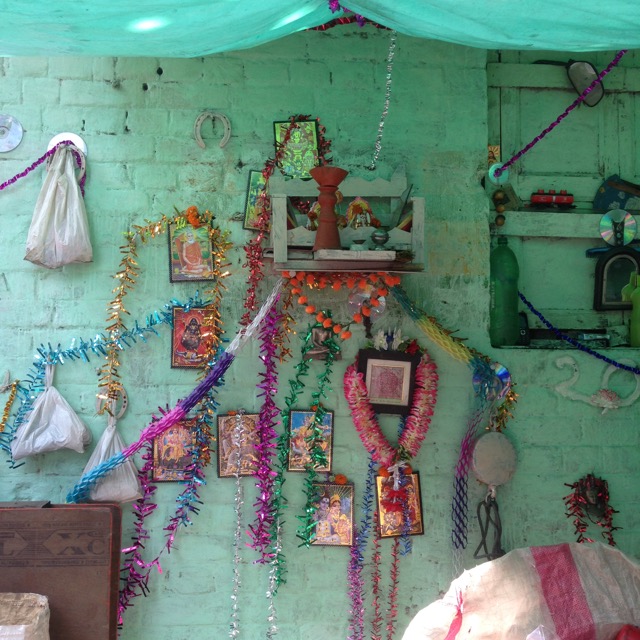 A man selling sweets – syrupy samosas, jalebis, another fried kind I don’t know the name of – hands over the change to a customer. I think for all cities, sweets are what keeps them going! 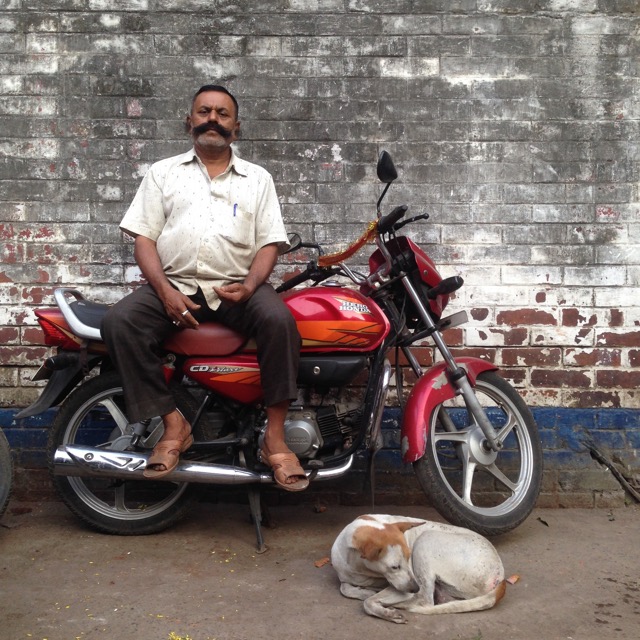 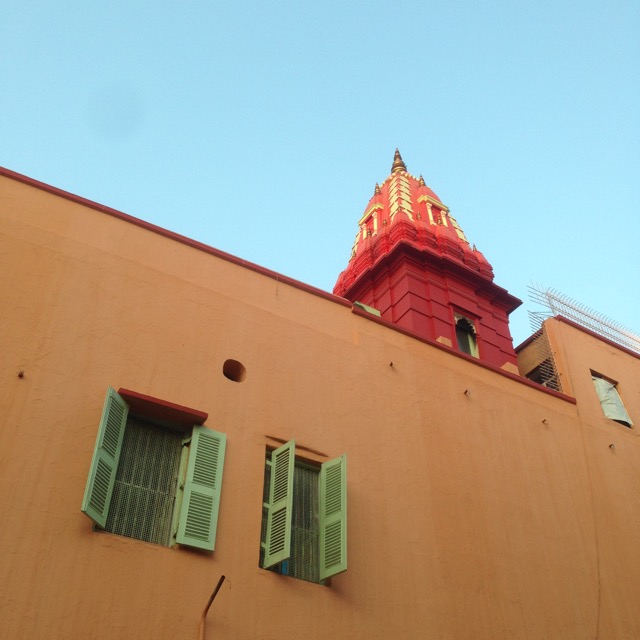 This man was sitting outside a pumping station just off the busy Chitpur road (now Rabindra Sarani – most if not all streets in Calcutta have been renamed, after independence and also during the communist era, making navigating an interesting discovery). 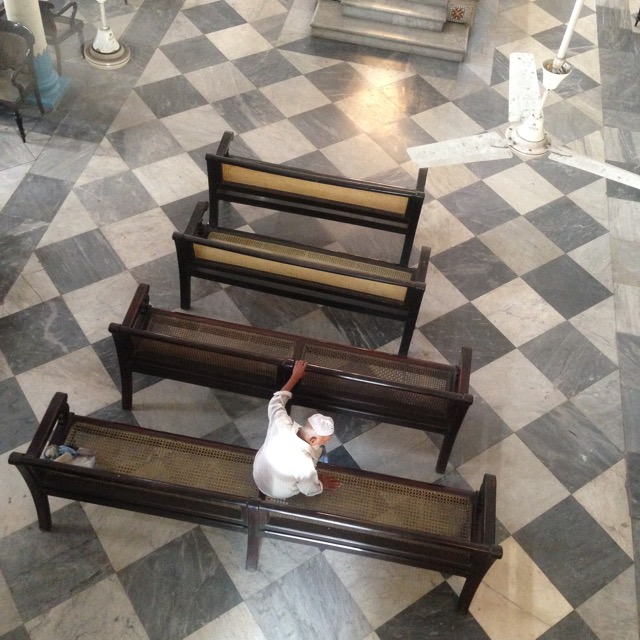 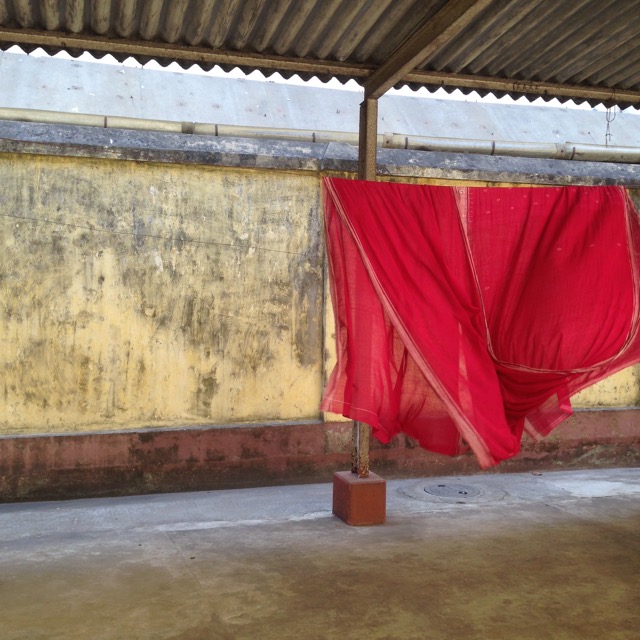 Looking down at Mohammad Khalil, who for 55 years was the caretaker of Calcutta’s Beth El synagogue, as he rests his legs on one of the synagogue’s wooden benches. Still serene and well preserved, it serves as a reminder of the city’s Jewish community, which once numbered in the thousands. Today, only about 15-20 people are left. “The others are in Canada, Russia, the United States. I’m the fourth generation of caretakers here, all of us Muslims,” said Seraj Khan, the son of Mohammad Khalil, as he put a white kippa on his head before opening the heavy doors. 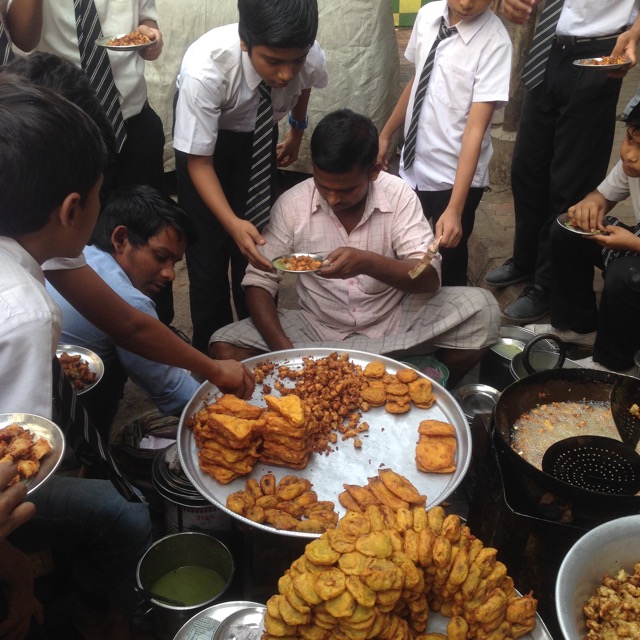 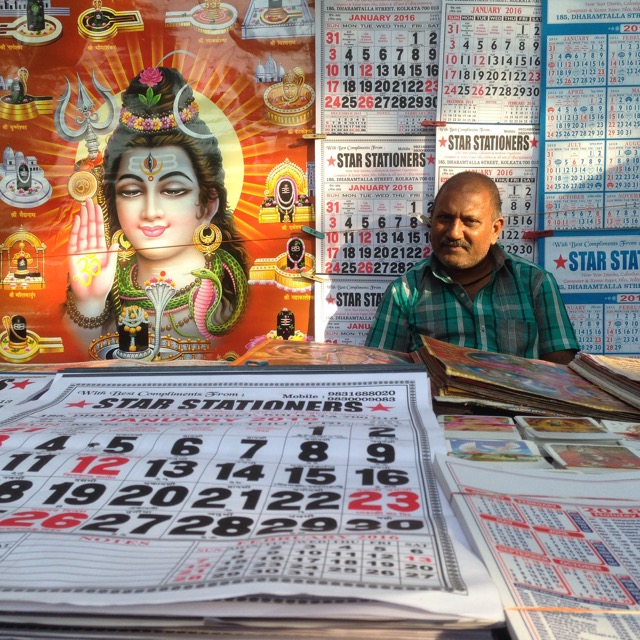 In nearby Bora Bazar, schoolkids buy deep-fried snacks: potatoes, cauliflower, onion and aubergine, dipped in yellow besan (chickpea flour). I loved how the man selling calendars was sitting next to the image of Shiva with a snake around his neck, there was something with the gazes of both of them there next to each other. Divinity and business.

Swedish friends – there will be three stories from Calcutta coming soon (with photos by Karim). For the lovely crafts magazine Hemslöjd, for which we did stories before about sisterly craft in Guatemala, Bengali weaving and patchwork and Syrian displacement. And for the equally great Vi läser, a publication about literature and reading where two spreads each issue is dedicated to a place somewhere in the world and its books. The third one is a story that looks back in history – to 1971, when 10 million refugees from Bangladesh sought refuge in India (and met open, not closed, borders).