Anyone who has been to a fair number of bus stations in southern Asia – or most other parts of the world as well – can easily close their eyes and imagine an unwelcoming place, hot and dusty and very much somewhere you want to leave as quick as possible (which is why you are there in the first place, but still). I think about plastic bags blowing in the wind, piles of empty bottles and half-eaten snacks and other garbage, corners from where the you sense the smell even before you sense the smell. I always think about the hard-working and courageous people who work at these stations: the water bottle vendors and those who walk up and down outside the parked buses with home-fried snacks and fruits ready to be cut, and of course the ever-energetic guys who make sure that as many people as possible are encouraged (by every means possible, no tactic is disallowed) to get on their and no one else’s bus. 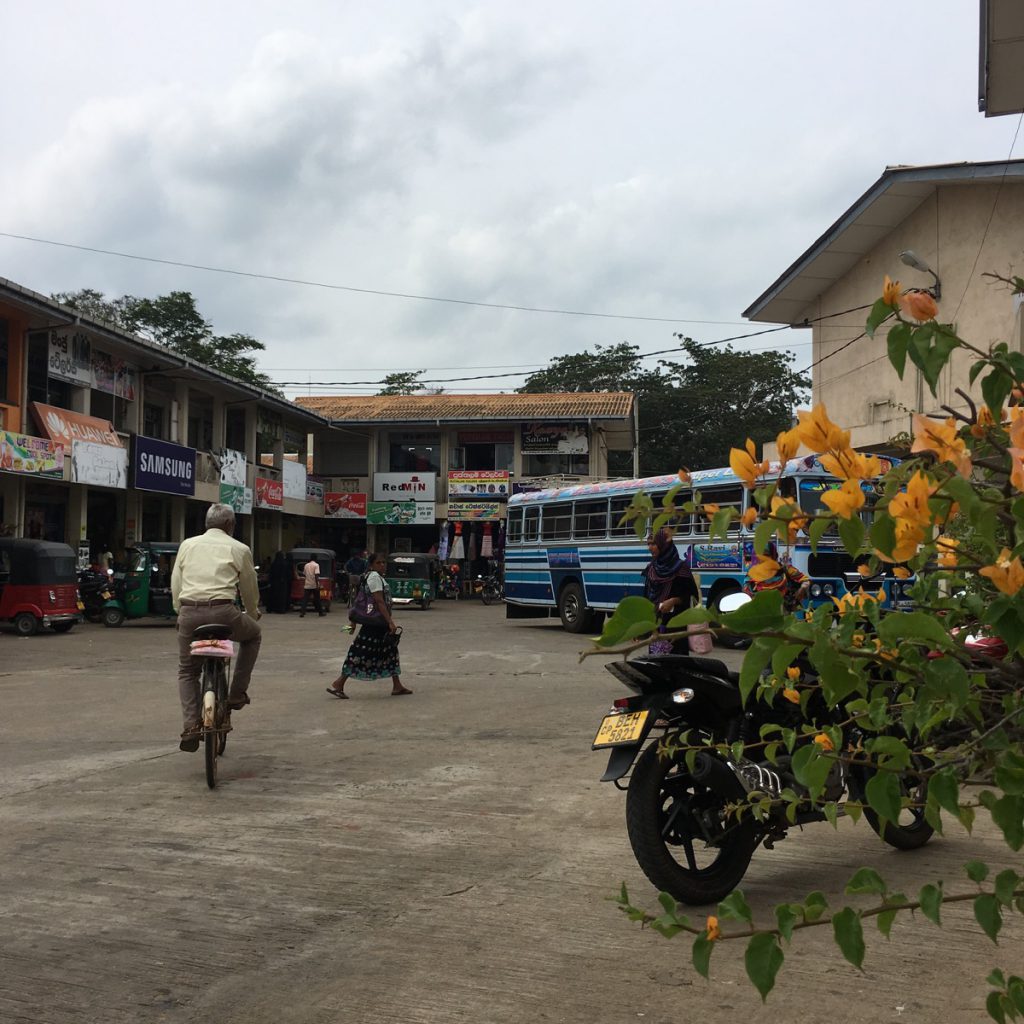 But just the other week, I came across an entirely different place. I first understood it was not like any other bus stop when, upon entering the station, I felt something touching my arm. It was a flower – someone had actually planted plants and flowers. Where were I, was this not a bus station? Then, I caught the eyes of a man with thin legs and arms, dressed in a lungi (actually, in Sri Lanka they say sarong, but my mind can only think of it as a lungi) and busy sweeping the ground clean. He kept sweeping, but there was nothing to sweep – the entire bus stop was already clean! No plastic, no leftovers. Soon, I realised: this was one of the cleanest bus stations I had ever been, definitely when counting countries where stations are places where large parts of the population pass through every day, and which make up small universes of their own. 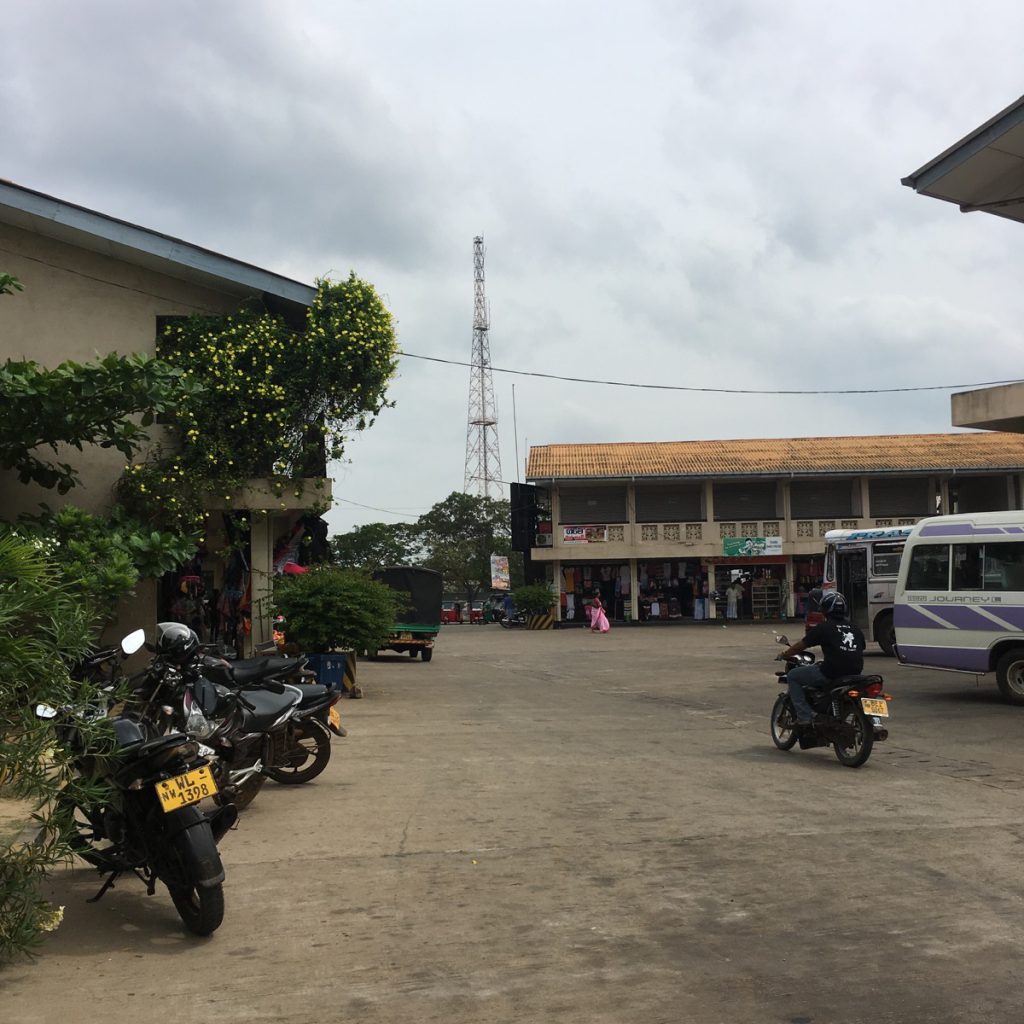 This was in Puttalam, a town on the Sri Lankan west coast. When you mention to someone that you’ve been to Puttalam, the standard reaction would be “Oh, it’s really hot there”. True, it was hot. I don’t know quite why, but the heat in Puttalam – as well as Mannar, the region just to the north of there – is really what can best be described as suffocating. The city is set on a lagoon, but the ocean is at least half an hour or 45 minutes away, and any breeze will be there only in your imagination. Besides the heat, I found one more thing to be very specific for Puttalam, and that was its extremely friendly people. Of course, people are people wherever you go – some are nice and others are rude, and sometimes you come across those who happen to have a really bad day. But still, some places (including Puttalam) seem to just have more of those who cannot wait to give you their best and most glimmering – and sincere! – smile.

Actually, several of those friendly Puttalamers were people in that bus stop. The group of young guys waiting at one of the sidewalk cafés, or the fruit vendors with impressive beards and equally impressive Arabic, learned during long years of working in the Middle East (which basically means Saudi Arabia, or perhaps Qatar or Kuwait – Dubai, they say, is much harder to get a visa for these days – all other Middle Eastern countries are not part of this meaning of “the Middle East”). Even the bus drivers, who otherwise may well be on the grumpier side, seemed happy and content with life. Perhaps it was the greenery and well-swept asphalt that had an immediate effect! 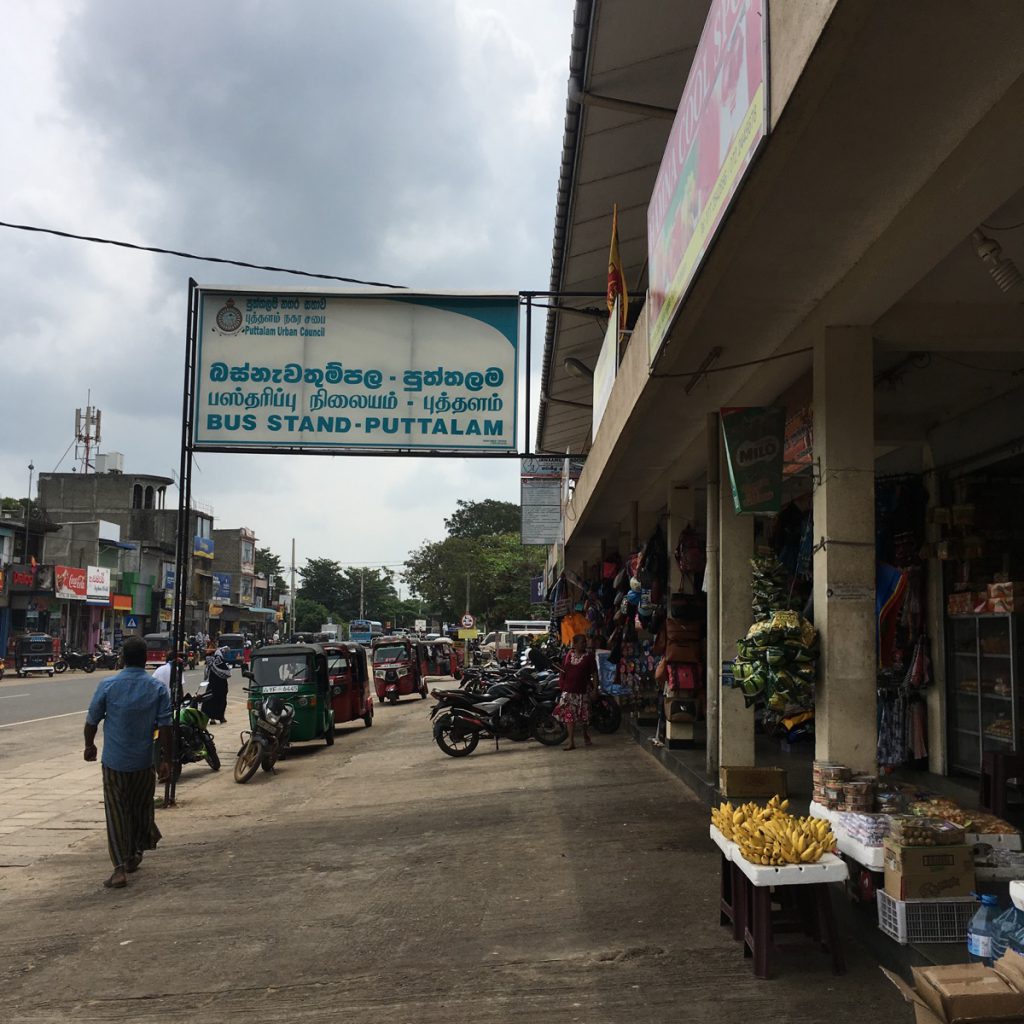 Puttalam Urban Council, says the sign – perhaps it’s them that deserve the praise!

Interestingly, Puttalam has gone through a major transformation in the last 30 years, as a result of many thousands of internally displaced people moving to the city. In 1990, right during the Sri Lankan civil war, the entire Muslim population of the north were expelled from their homes, literally overnight (in Jaffna, the main city in the north, families were given only 2 hours to leave everything and go). This was a politically motivated move by the Tamil Tigers (LTTE) who were then in control of these areas to eliminate, beforehand, any kind of potential gathering of people in what they considered the Tamil homeland to go against their fight. Perhaps 75,000 Muslims were forced from their homes on that occasion, and many of them came to Puttalam, one of the nearest areas with substantial Muslim populations. For a rural region like Puttalam, which already was relatively poor and lacked infrastructure and development, accommodating for so many new people was an enormous challenge – and for those who were forced to flee their homes to start a new life as refugees in their own country, the greatness of the task was even bigger. Today, many families from the north still remain in Puttalam, where they have formed lives and built homes and started jobs and businesses. All of this is another story of course, but is still related to this nicer-than-others meetingpoint for buses. 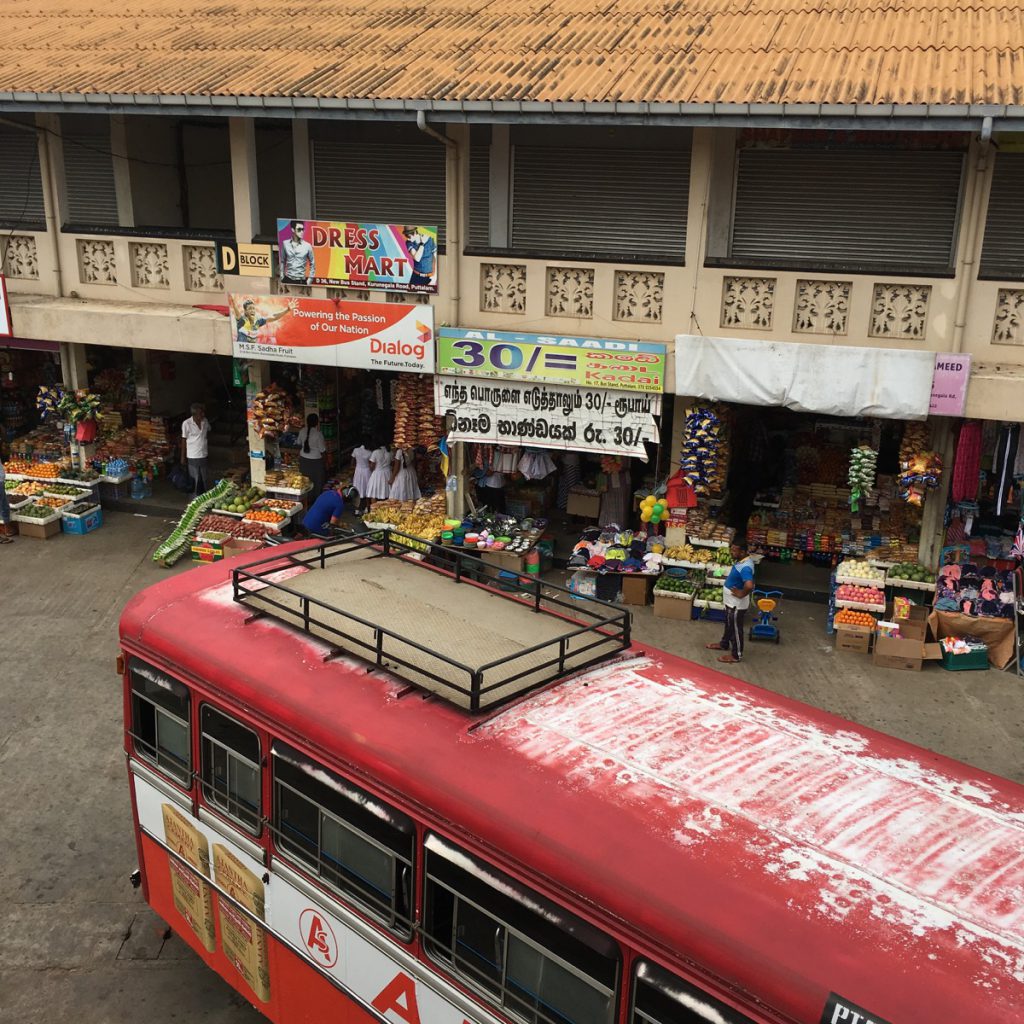 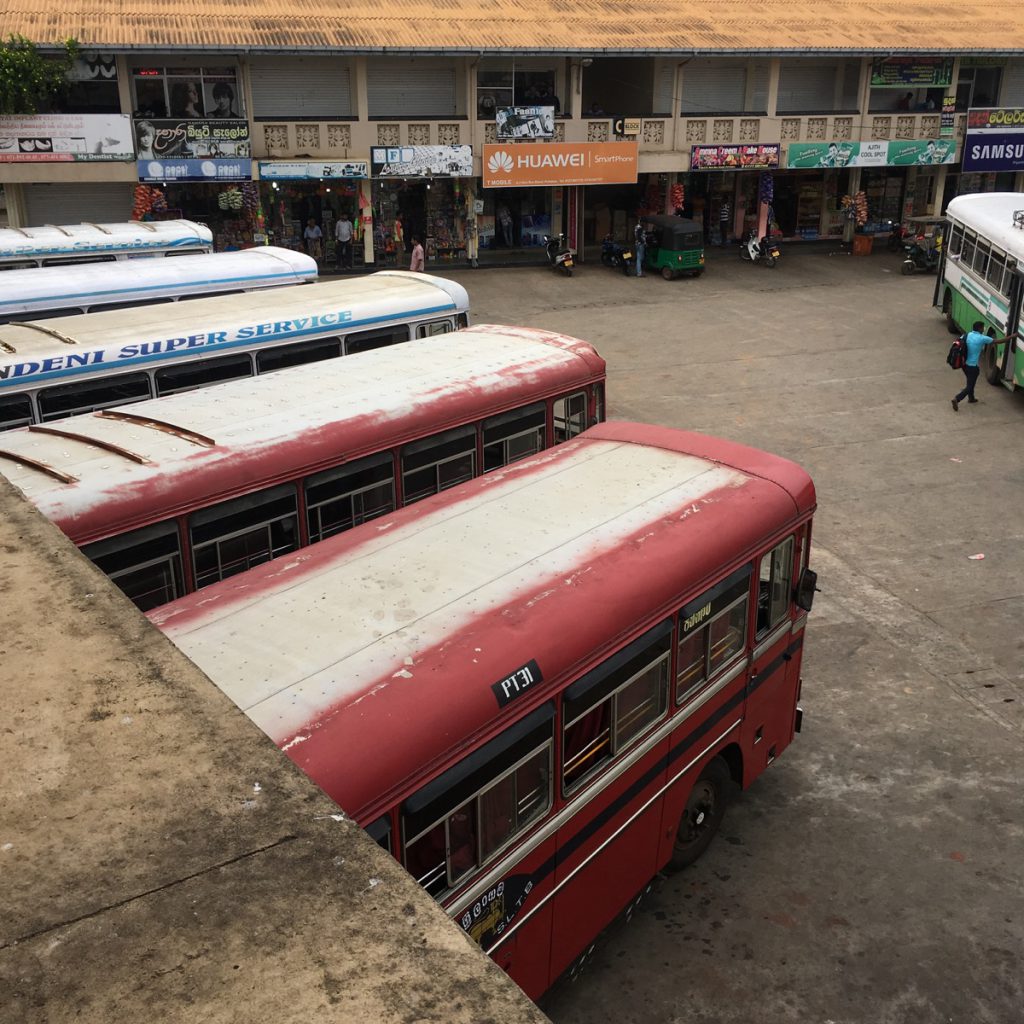 Even the buses are parked nice and neat! 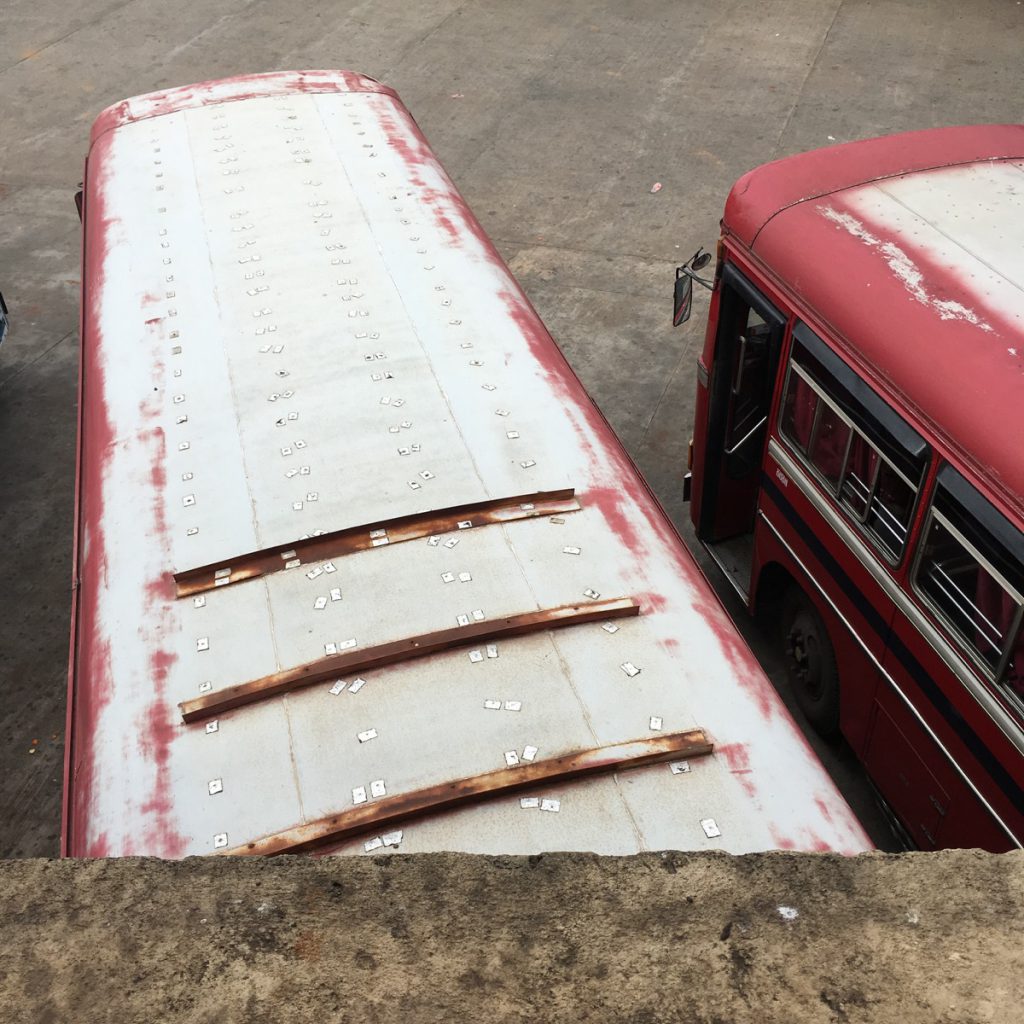