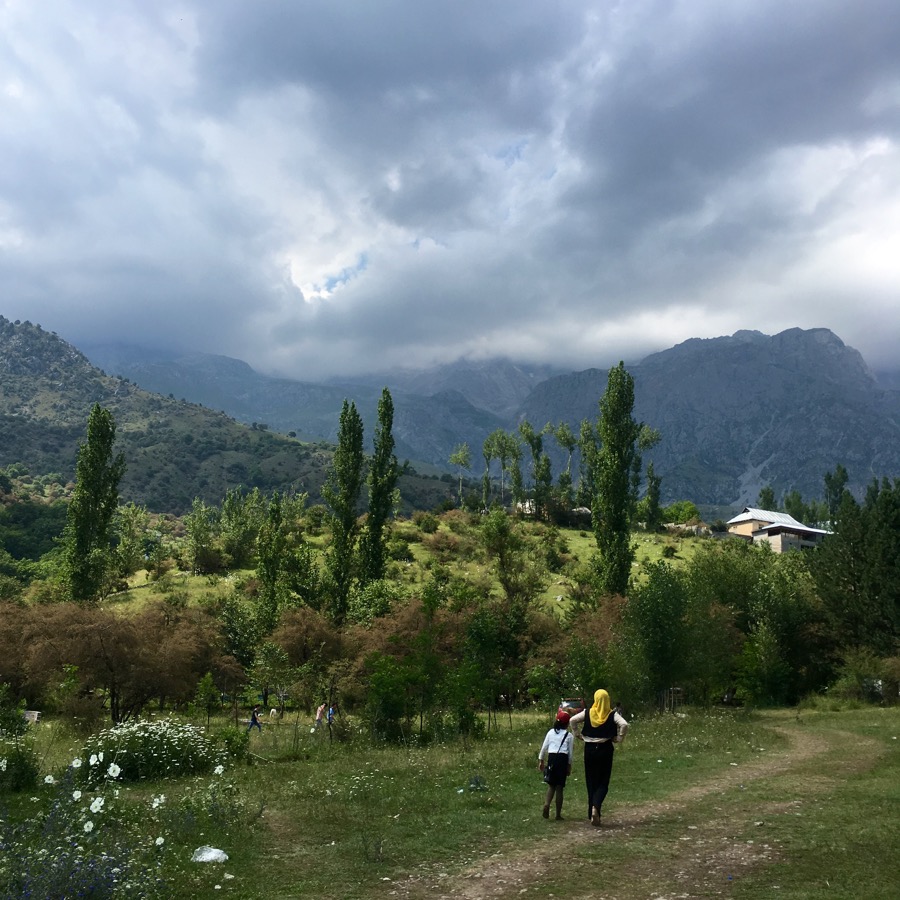 Arslanbob – of walnuts, mountains and divinity

There’s a road leading up from Bazar-Khorgon, a small and dusty town in the Fergana valley, the open lands connecting southern Kyrgyzstan, eastern Uzbekistan and the north of Tajikistan. It leads along a river at first, with houses and small farms on the other side of the road. Then, it takes a sharp left turn, and starts climbing the hilly mountains. It continues past a few small villages until it reaches the end, which is also where something else begins: the mountainous village of Arslanbob.

Everything is different up here, from life down in the valley towns. The mountains are closer, and covered in soft greenery. The air is filled with the sound of the river that flows down through the village, finding its way through stones and pebbles and rocks. The sky is not really closer I guess, but it really feels like it. No one is going anywhere (other than to or from their house), because there is nowhere else than Arslanbob up here. 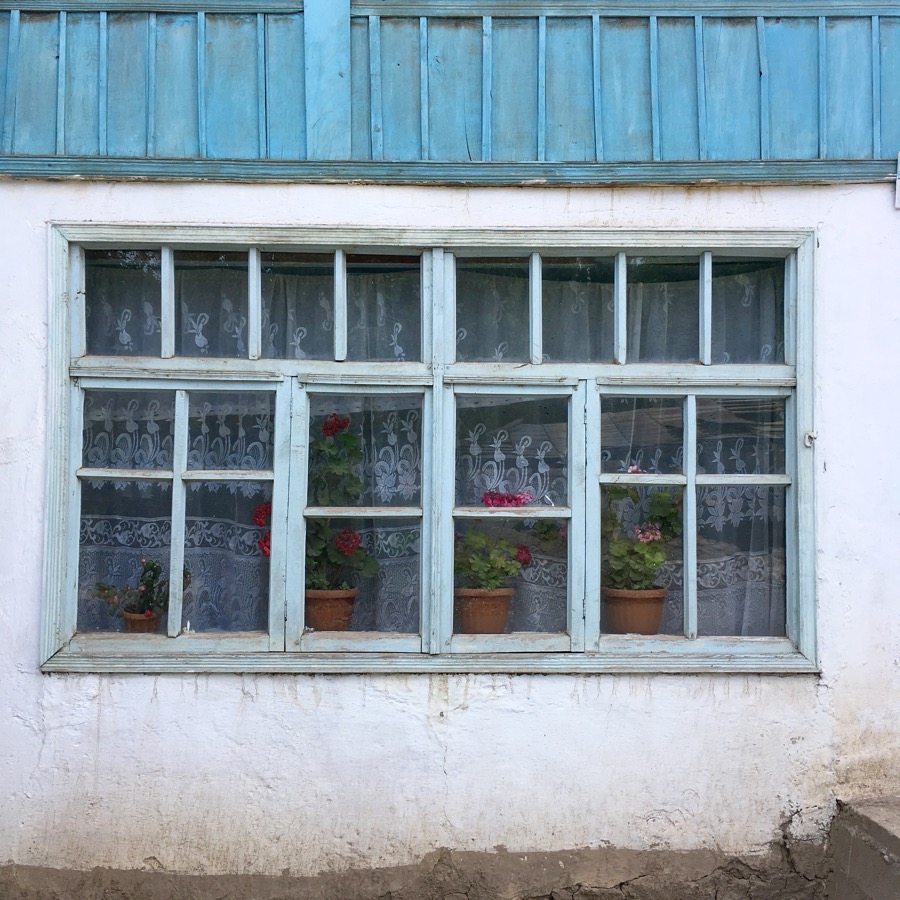 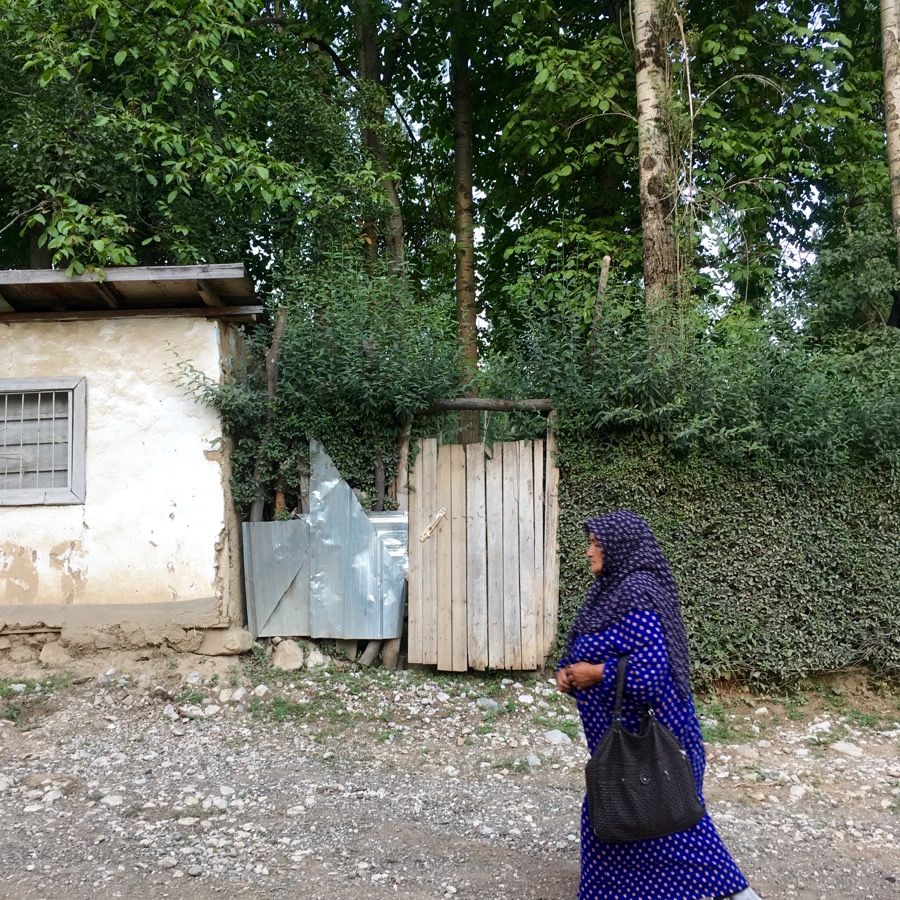 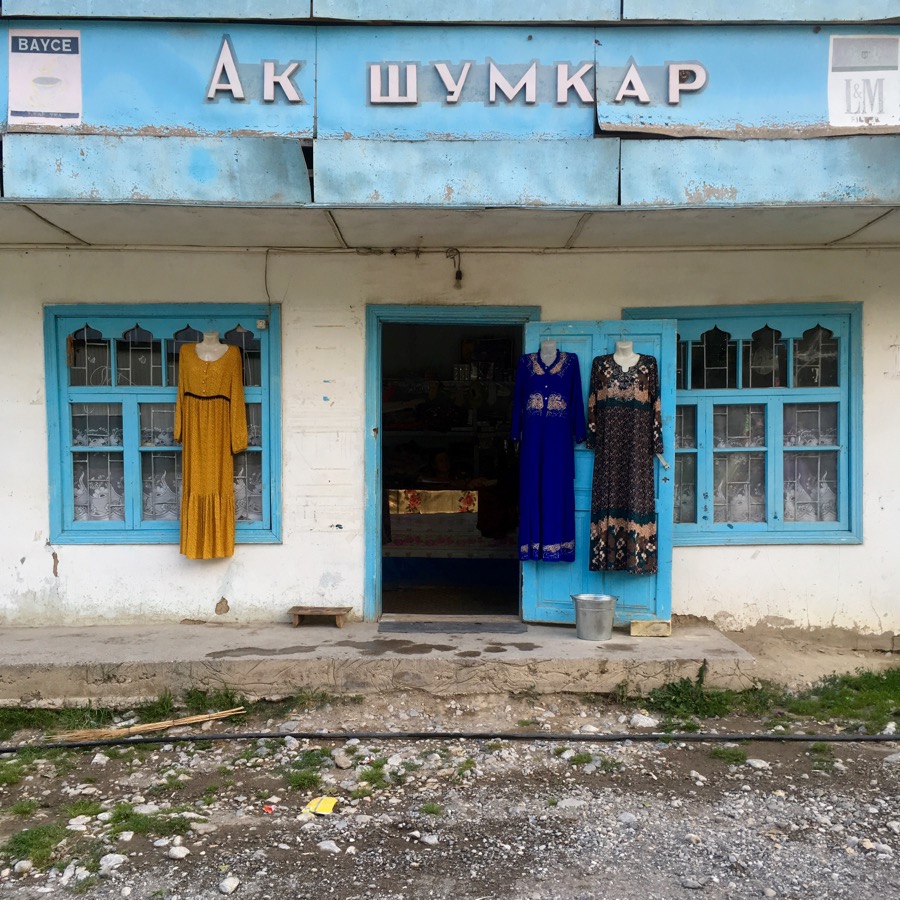 Kyrgyzstan has a great service for visitors and travellers: a nationwide network of homestays called CBT (community based tourism), with offices in many towns and regions. I only had the chance to get to know one of them, the one up in Arslanbob, which essentially is a small building just up the road from the village square and main bazaar. With the help of them, you can contact a family in the area, who have organised a few rooms in their house or farm where visitors can stay – there’s breakfast in the morning and, if you want to, homecooked meals at night.

I stayed with the Abdullajan family – Mubarak and Abdelaziz and their three kids, Hamengul, Fakhrenour and Abdelhalim – on the other side of the river, just south of the village. I think, had there been no return ticket and no work commitments waiting for me, I could’ve stayed at their place for weeks. Eaten cracked wheat and pancakes for breakfast, learned from the kids to count in Uzbek (most of Arslanbob’s inhabitants are Uzbek; the Fergana valley is a diverse region with a mix of Tajik, Uzbek and Kyrgyz communities), gone to sleep and woke up to the sound of the river. 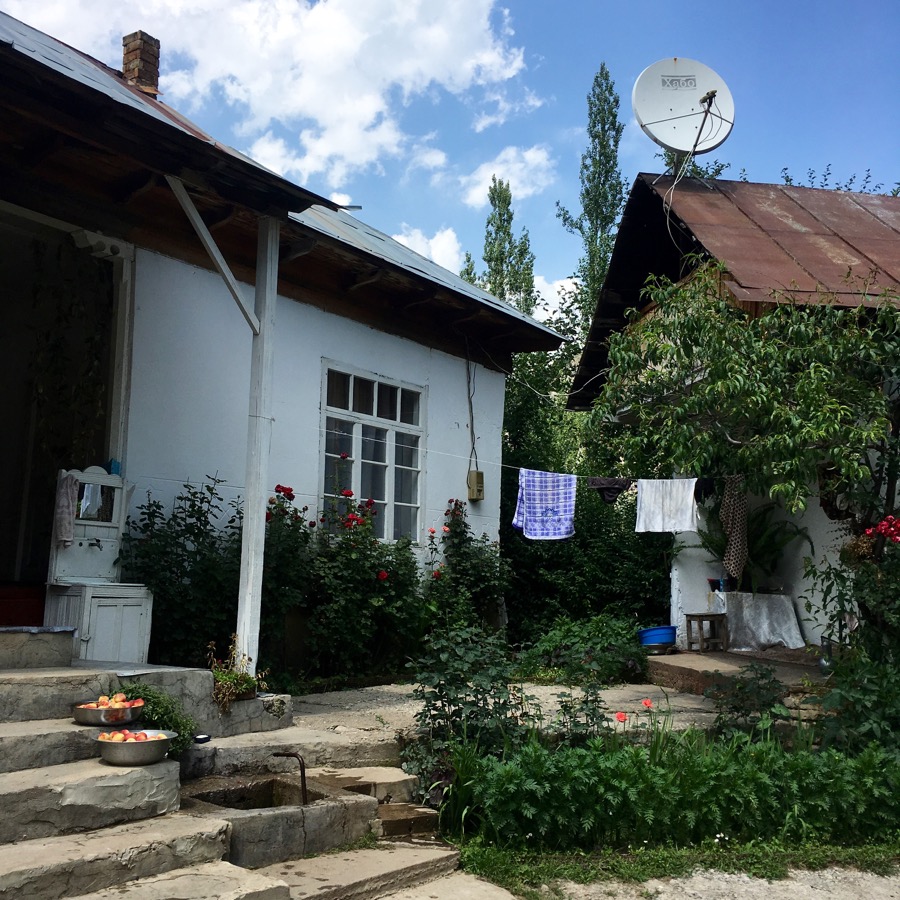 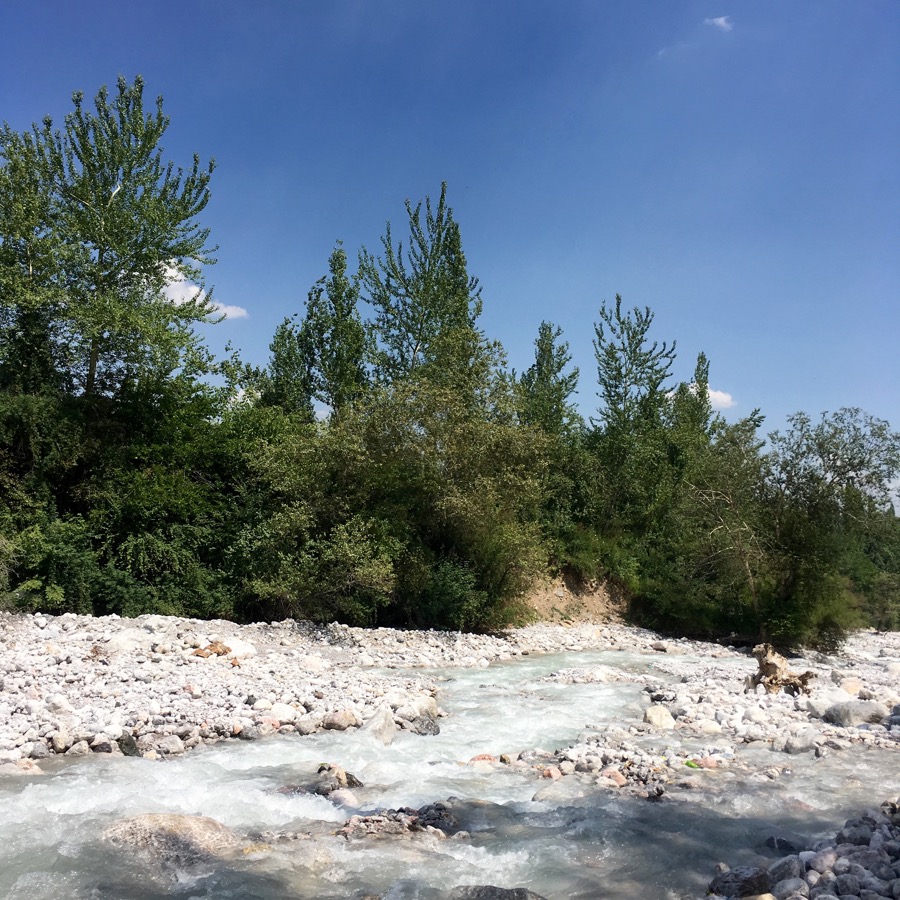 The Abdullajan family’s house; the river that runs past it.

There are many legends surrounding Arslanbob – the figure who gave the village its name, Arslanbob-Ata, who might have been of Arab descent (we’re on the Silk Road, so all kinds of people have passed by); the large (largest in the world, actually) walnut forest just next to the village, where people spend long days and weeks in autumn picking nuts (the schools even close at that time, similar to what schools used to do in Sweden when farming was the way of life, kids would then get a “potato break” when it was time to pick the ever-loved tubers from the ground) and they say was planted by none other than the Prophet Muhammad, who sent walnut seeds with an envoy after having discovered Arslanbob and found it “the most beautiful place on earth”. Judging by the taste of the walnuts I had at the Abdullajan family, that was a divinely good decision. 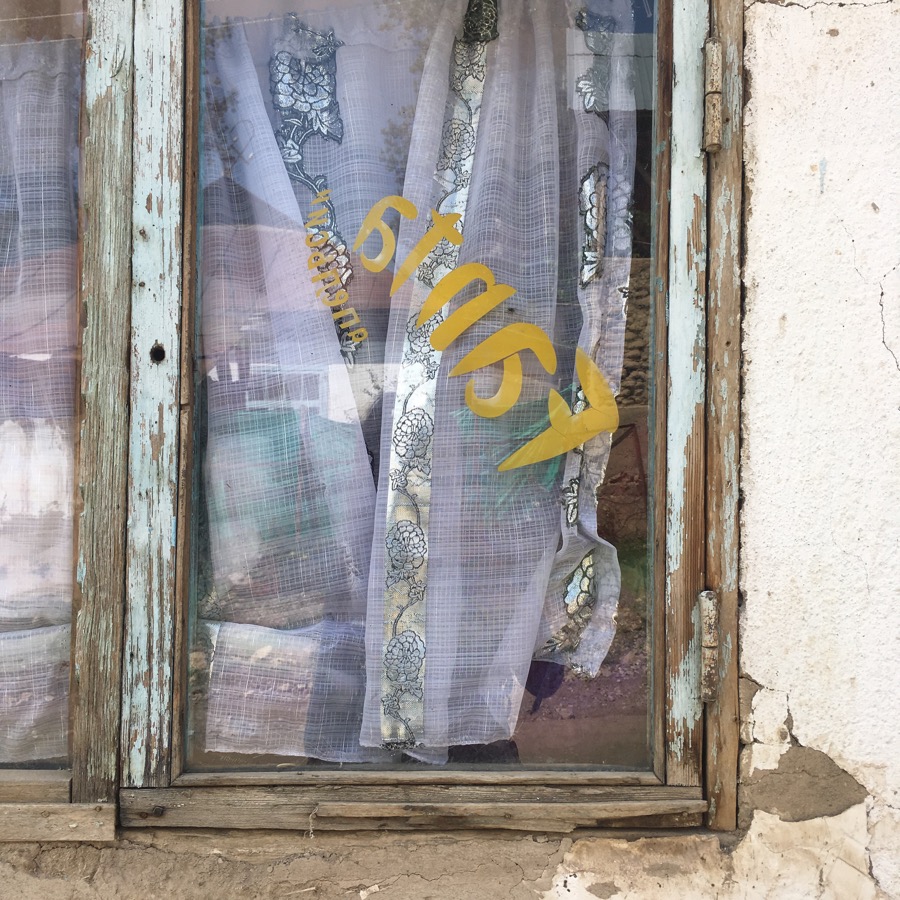 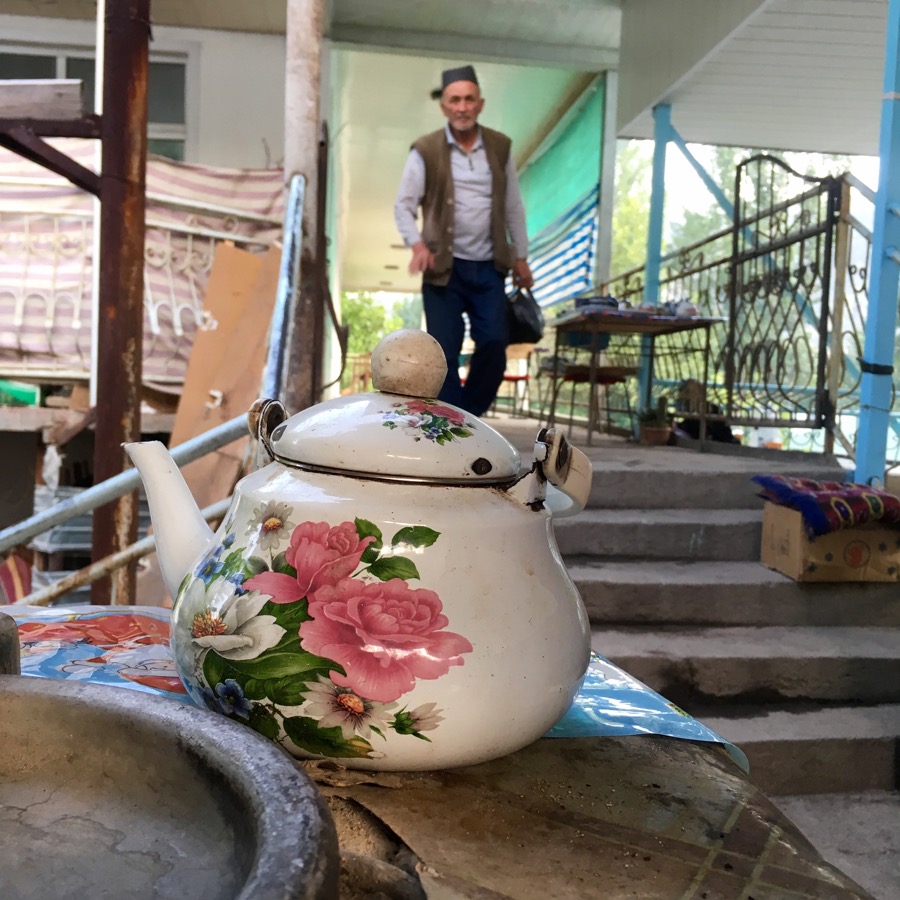 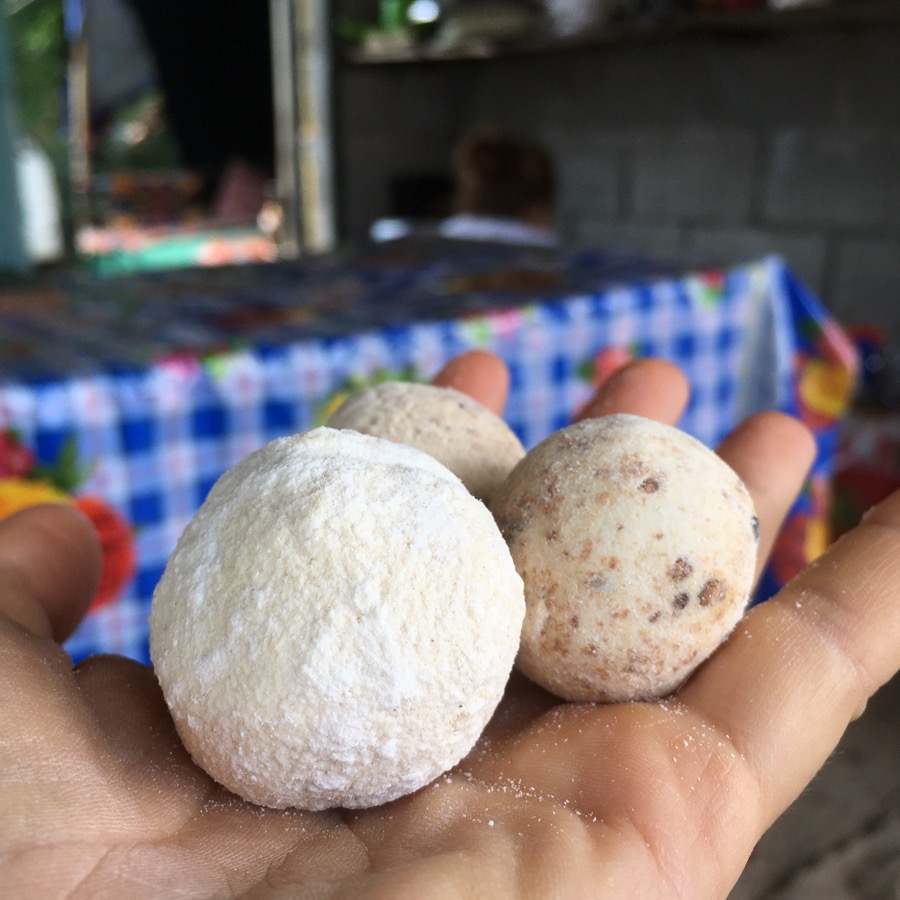 A house and a café in Arslanbob, and three pieces of kurut, the Central Asian dried and fermented yoghurt, with a deep and salty flavour and cousin of the Middle Eastern kishk (in Syria and Lebanon the yoghurt is mixed with bulghur; Kurdish, Turkish and Persian people eat it as well, prepared in different ways).

Most of the legends, however, are connected in one way or another to the mighty mountains. Of course. Similar to the ocean, mountains have a very special power and influence over us. They attract us, make us feel at once small and powerful. Connected to what was before and what will come – liberated from the insignificant matters of the everyday, from everything that matters little in the face of the eternity of nature. I have had many conversations about mountains and seas, often in Lebanon which has both: a long Mediterranean coastline and surprisingly high mountains. People often have a deeply rooted commitment to either (not seldom depending on where they used to go in the summer as kids, to the sea or the mountains). As with many things in life though, having both is even better, which is how this ocean girl came to fall in love with Arslanbob’s mountains. 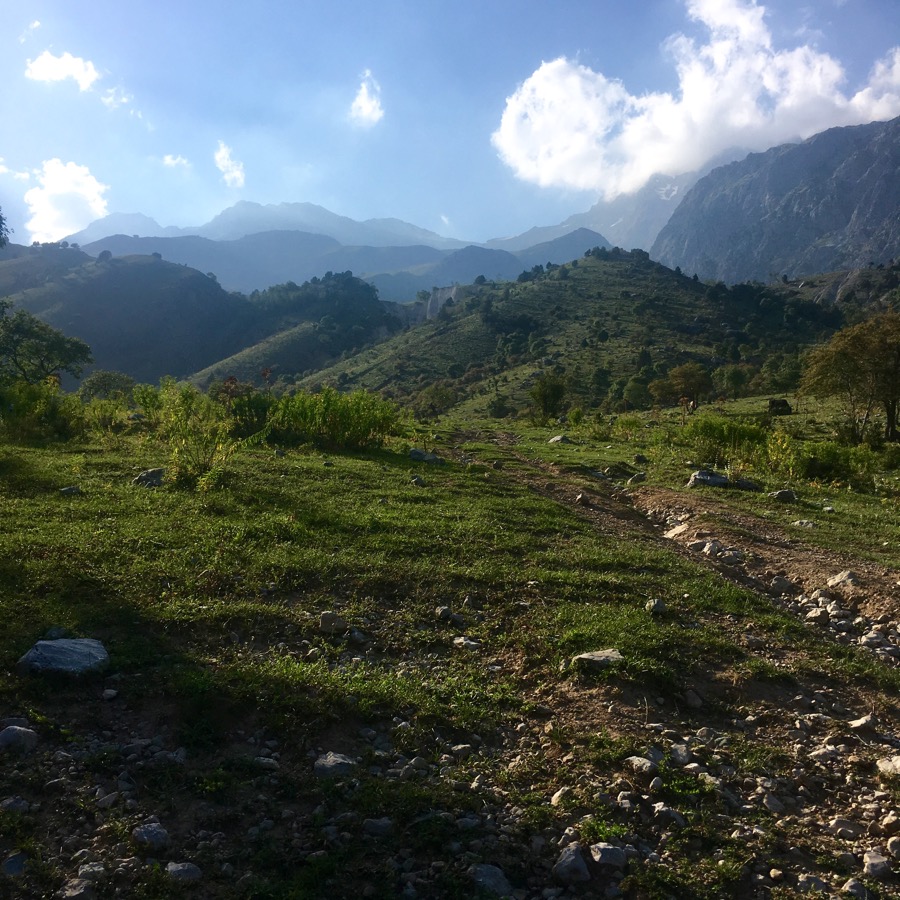 The small square rock, in the bottom left corner of the photo, on the middle mountain range (with the second-lightest colour), has holy powers and is visited by many a devoted – or stubborn – climber. Going up requires a fair amount of intuition or pathfinding skills to stay on the right track (because there are no signs whatsoever, and countless of tiny paths used by happily grazing cows); going down requires the same, because obviously you were not smart enough to look back while climbing, to memorise the way. 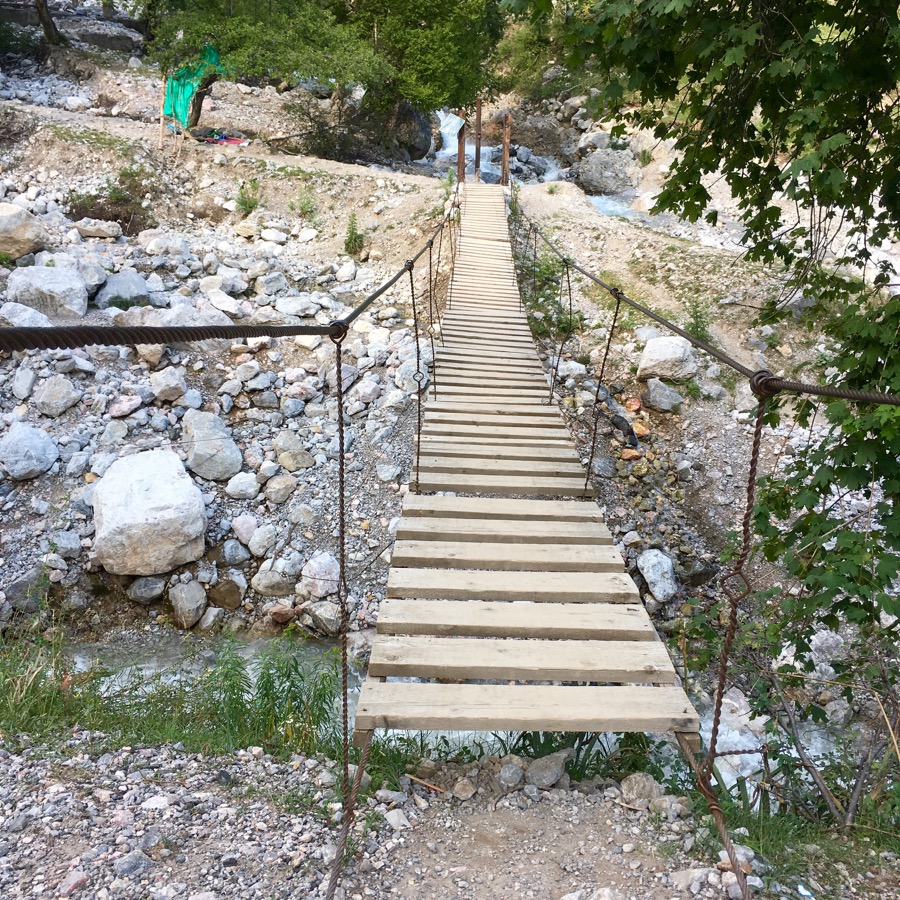 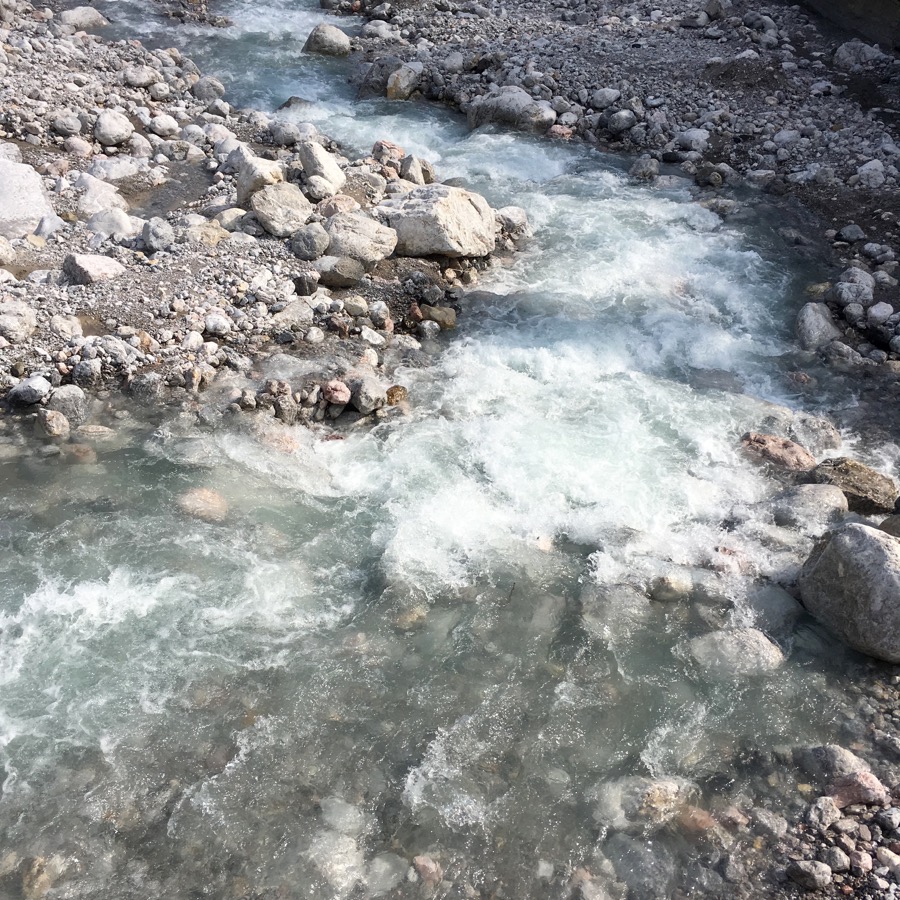 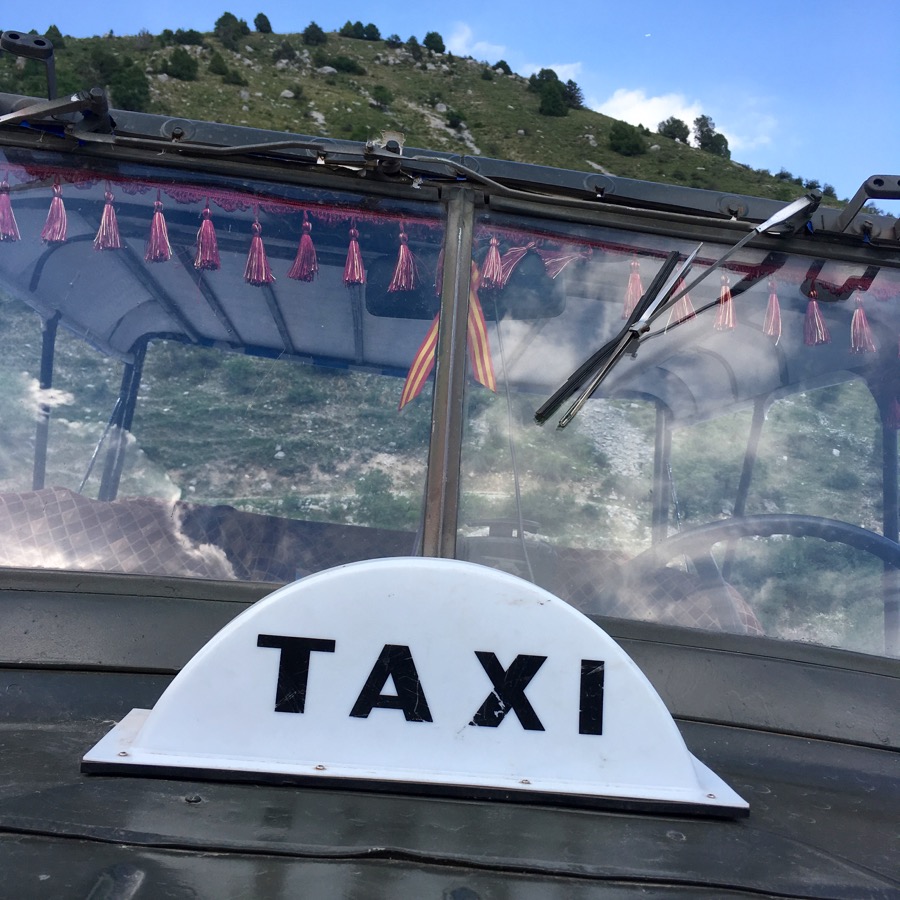 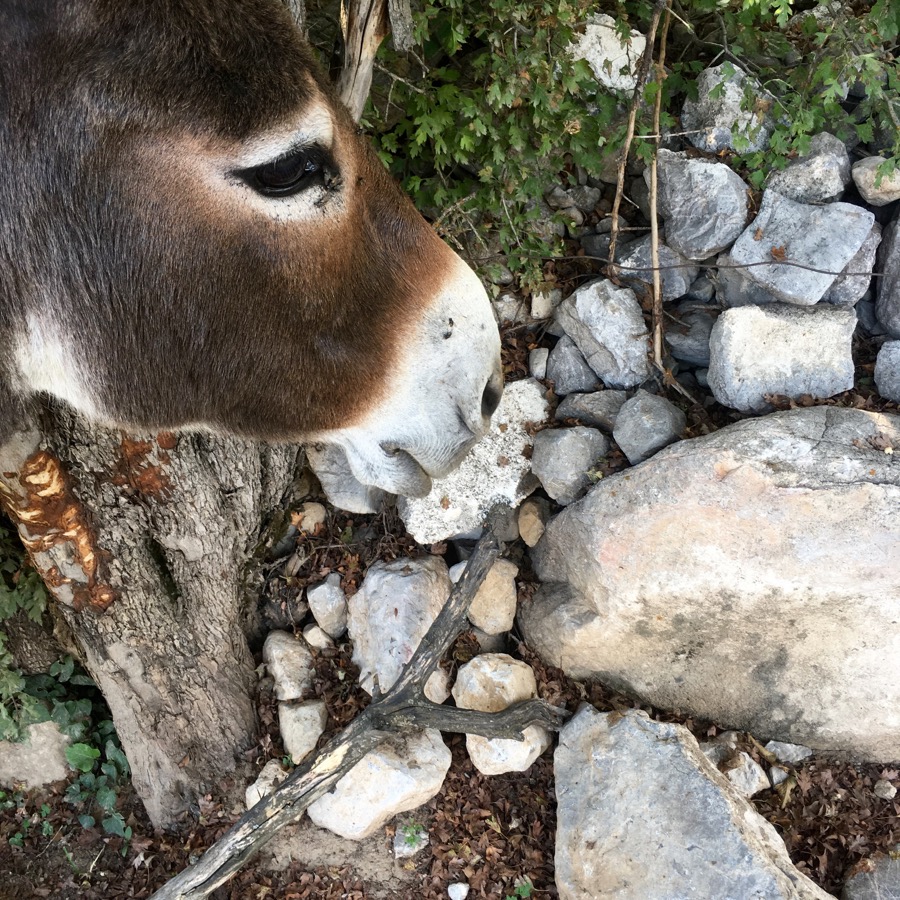 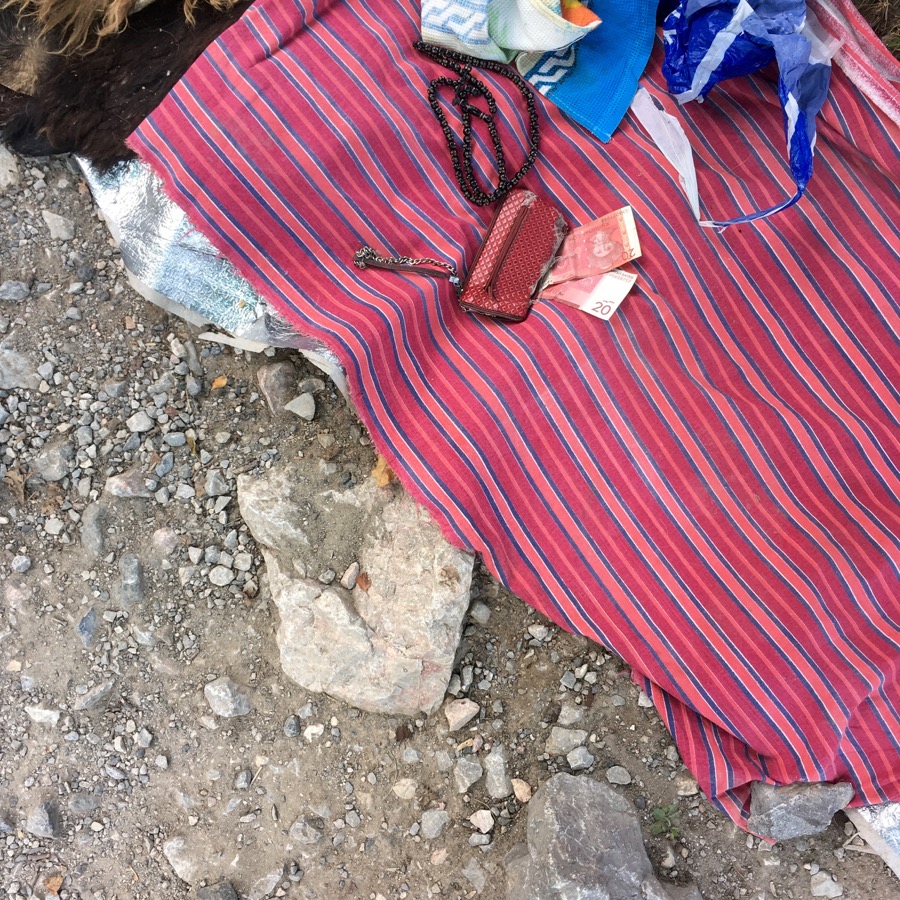 Along the path leading up to Arslanbob’s big waterfall (there’s a small one also, close to the village). 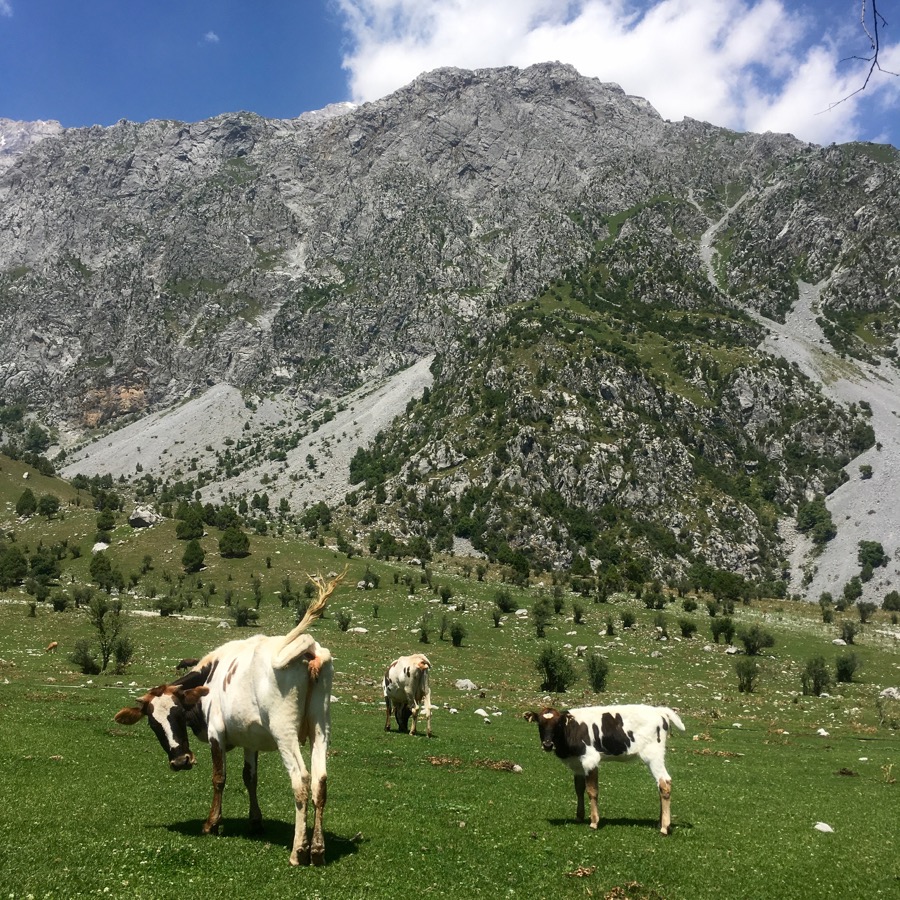 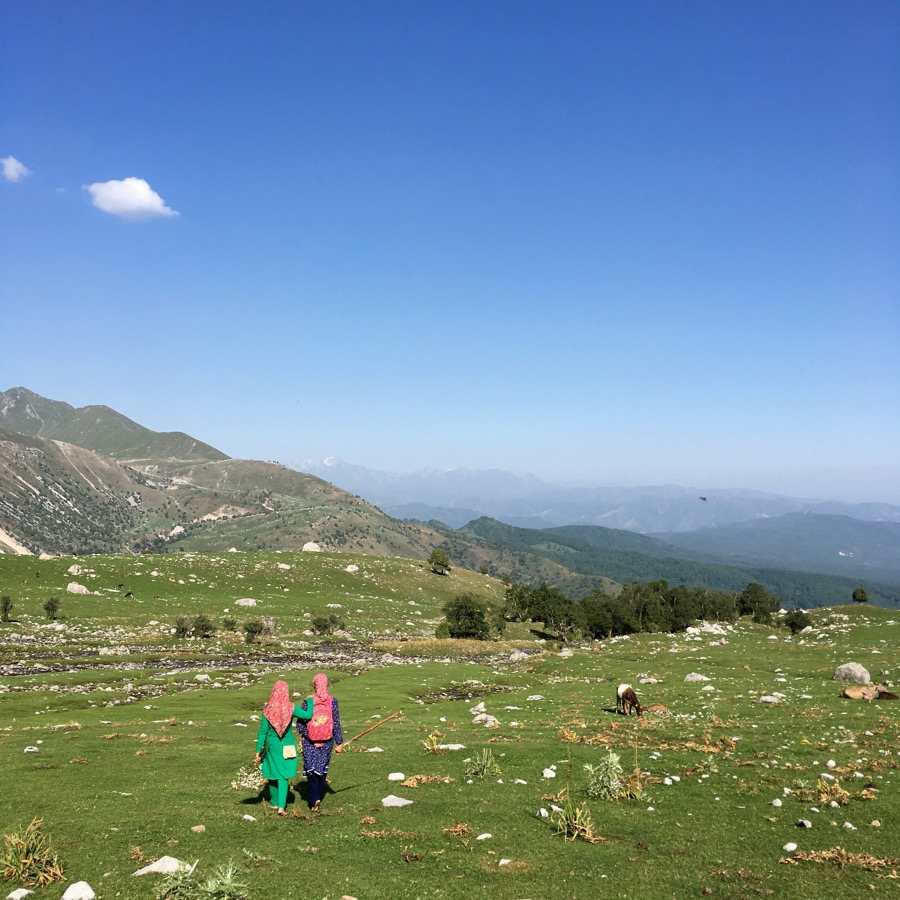 Cows eating their day away at a jailoo, an open pasture in the middle of the mountains; two friends walking through a hilly part of the path leading down from the Holy Rock, where legend has it that Arslanbob used to pray: he had special powers and could not be killed by any weapon or person, except when speaking to God on top of the 2,700 metres high mountain with the Holy Rock. 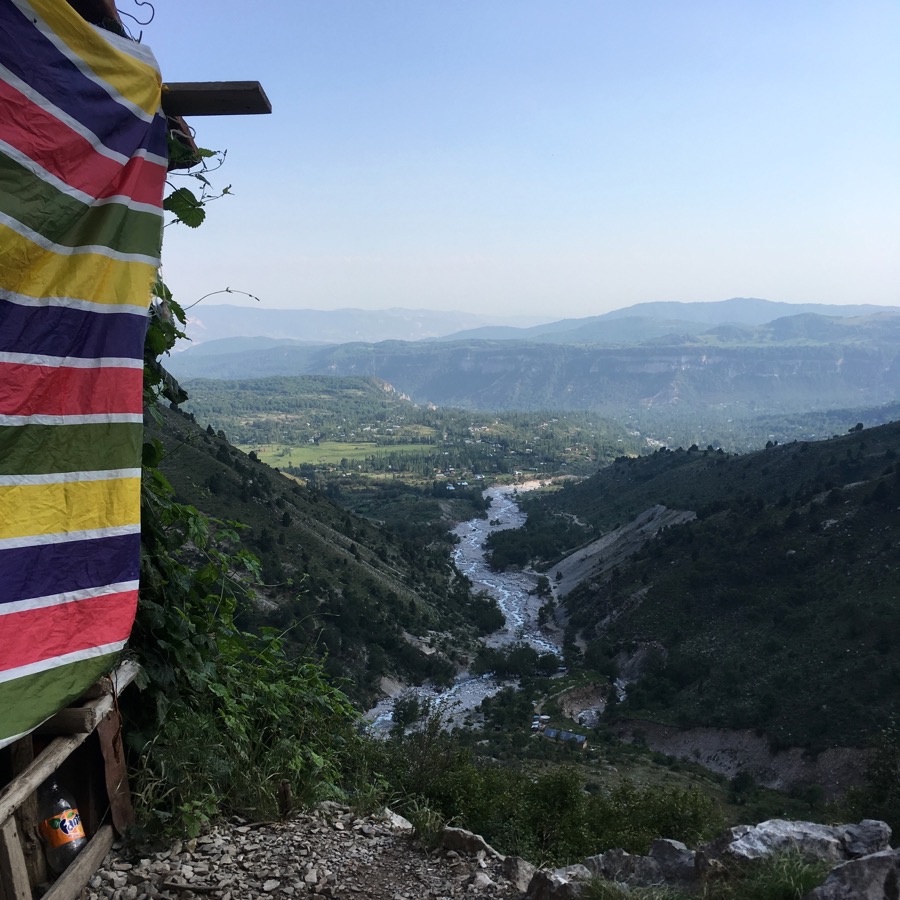 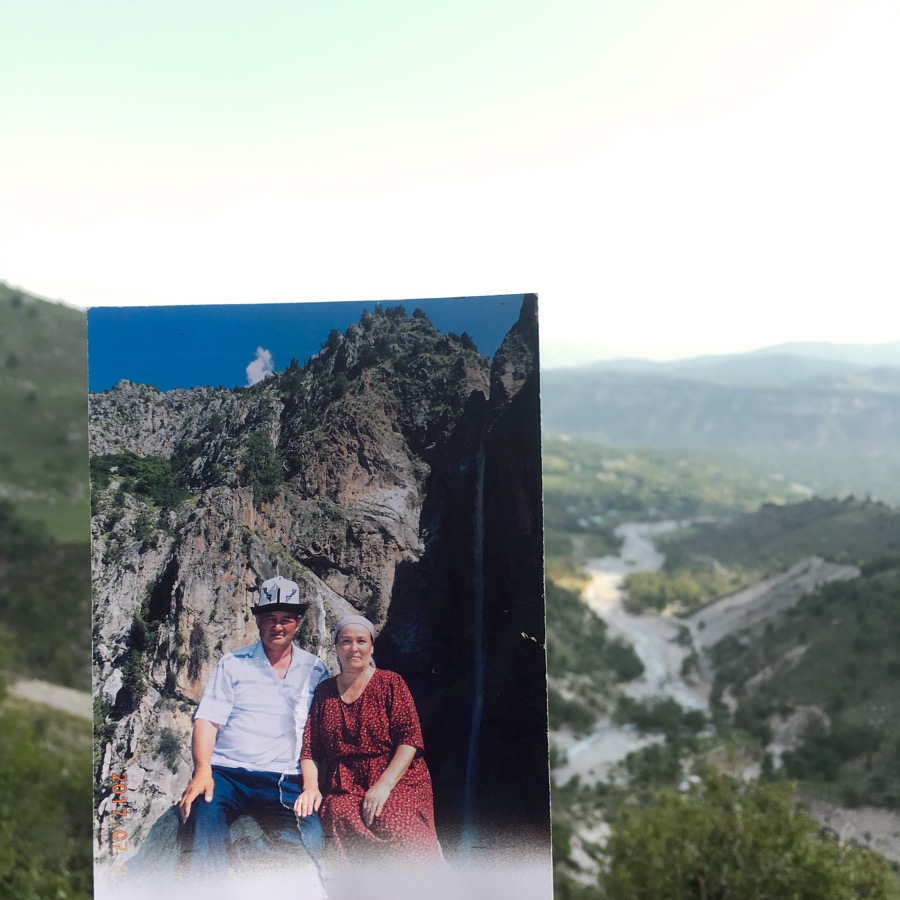 At a peak overlooking the village, an unknown couple had left their portrait behind. 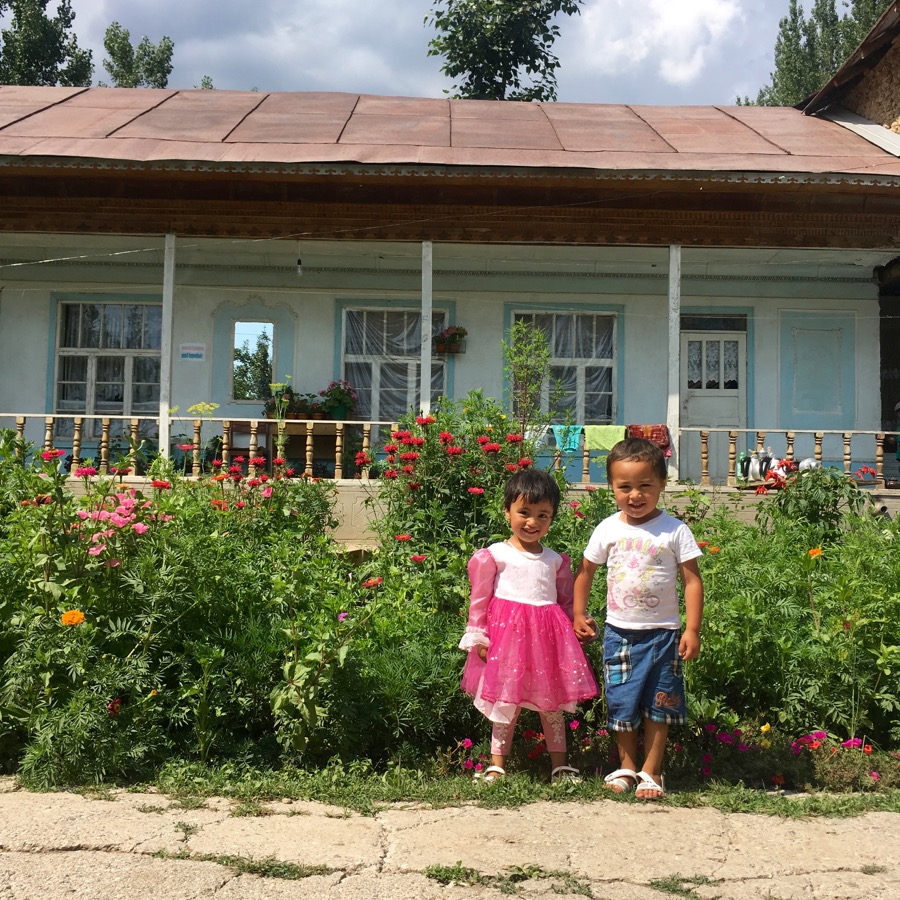 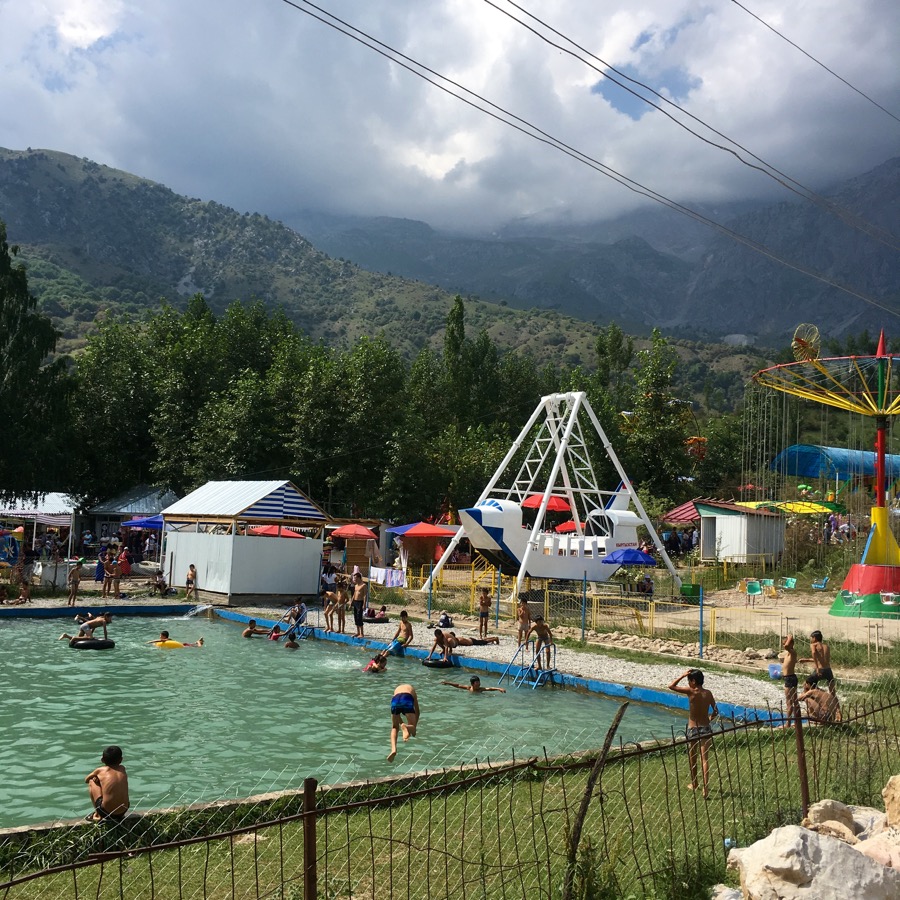 There’s an amazing open-air amusement park on the outskirts of Arslanbob, 15 minutes walk up the road leading through the village. It is impossible to miss, not only because of the multi-coloured rides and ferris wheels sticking up among the mountains, but also because of the never-ending music coming from the daytime disco at one end of the tivoli arena. 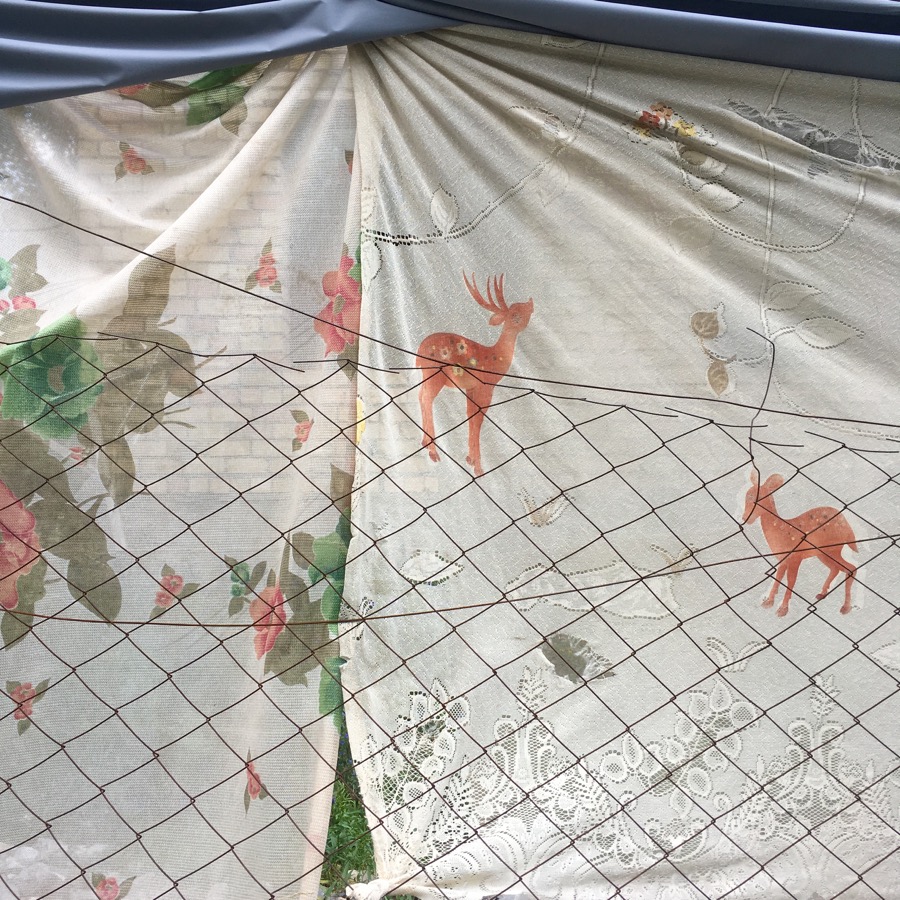 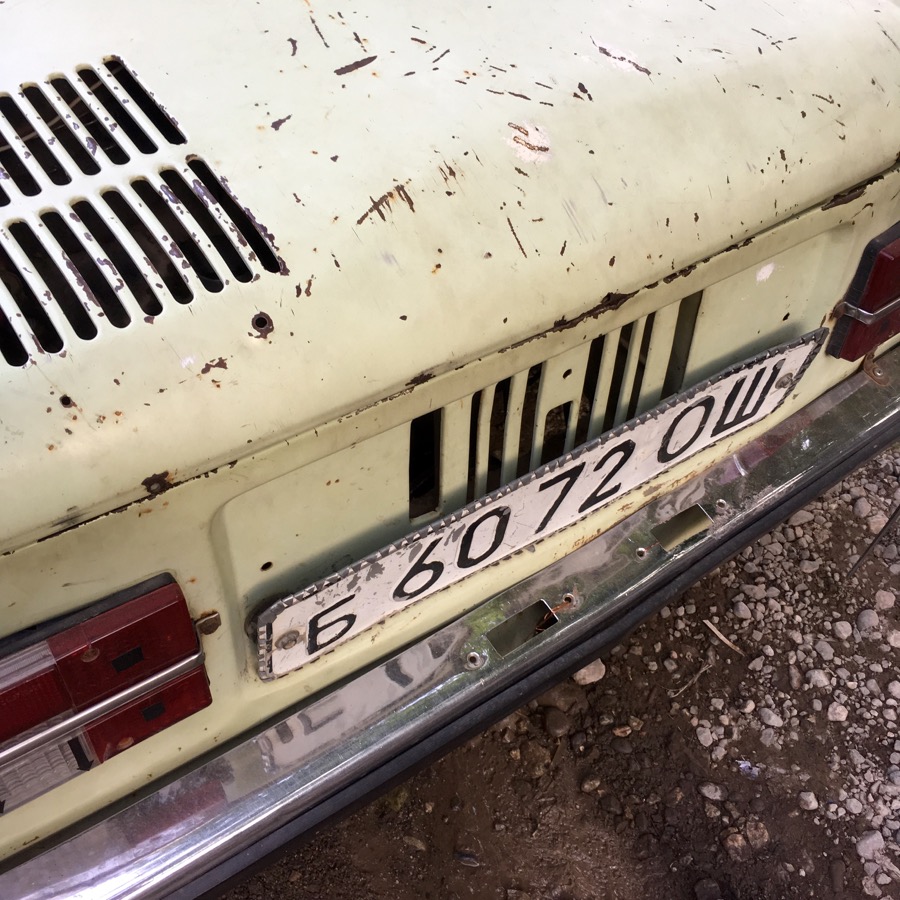 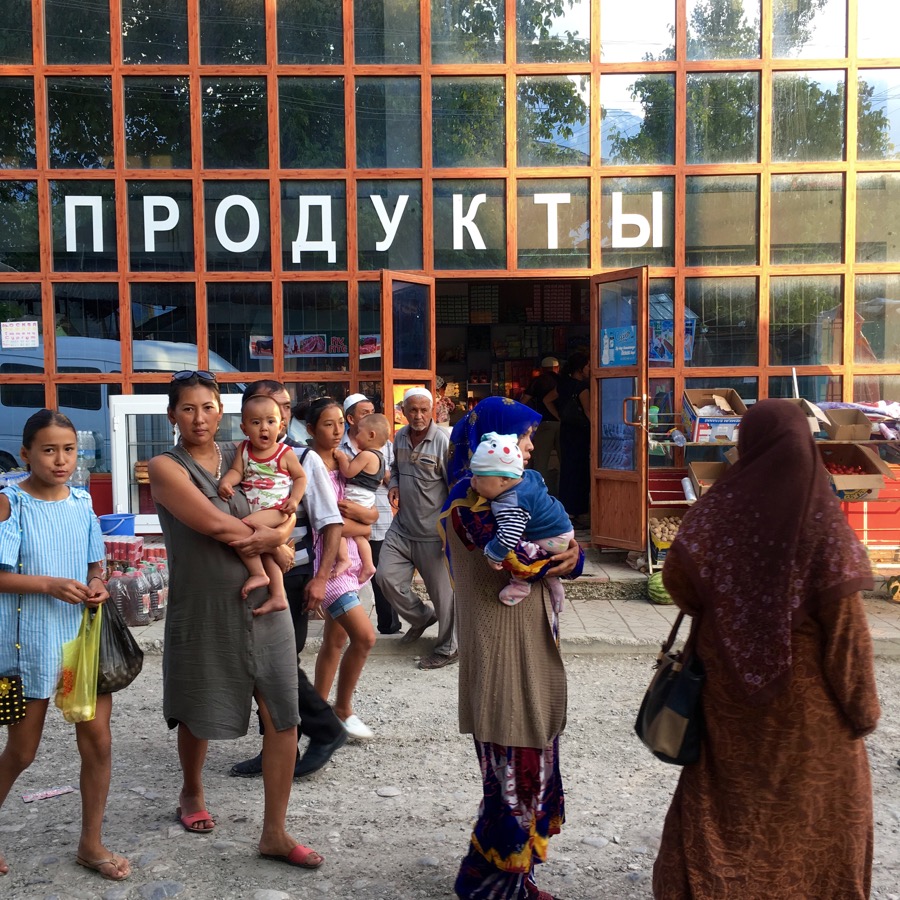 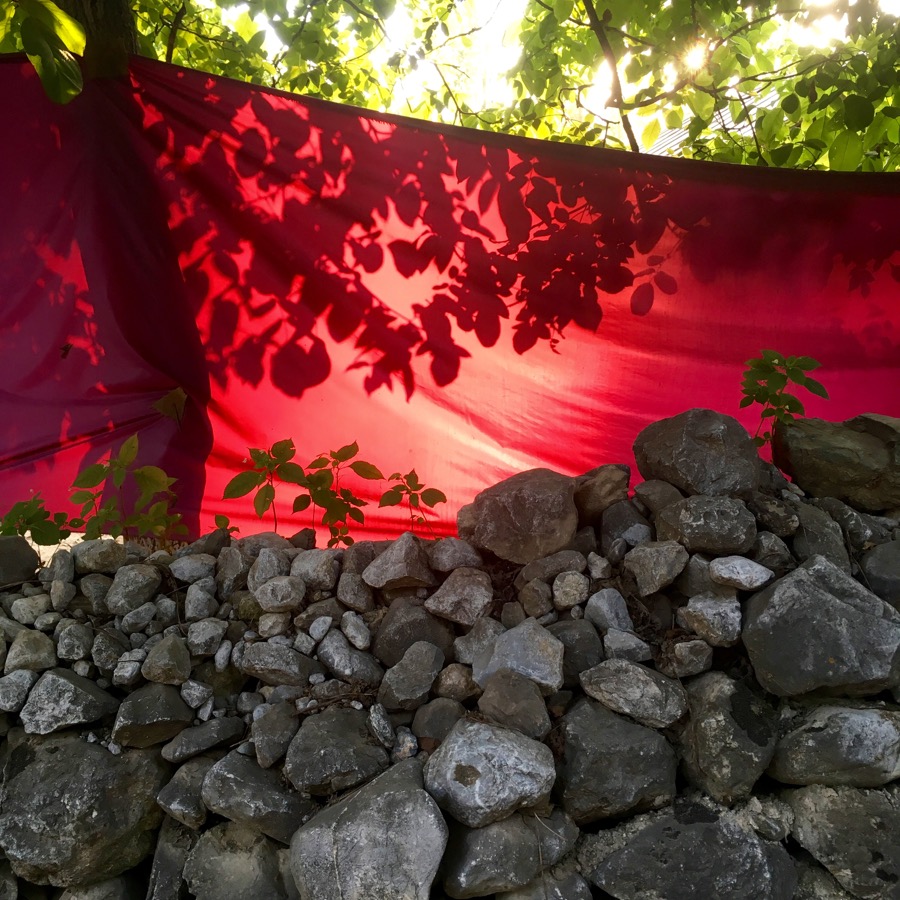 Moments in the life of a mountain village.